A powerful, fictionalized account of a family haunted by the Armenian genocide. 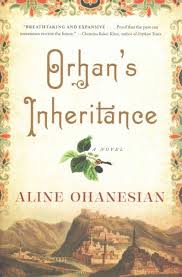 “They call it transgenerational grief now. We call it being Armenian.”

Aline Ohanesian’s debut novel, Orhan’s Inheritance, is indeed about the will of the late Kemal, Orhan’s beloved grandfather: both the heirs and the inheritance. But more importantly, the story is about the profound and intergenerational consequences of a different kind of inheritance: that of the killing, if not the genocide, of 1.5 million Christian Armenians in Turkey in 1915.

During World War I, when Turkey allied itself with Germany, fragmenting of the Ottoman Empire and nationalistic fervor prompted persecution of those who were not Muslim Turks. Armenians, descendants of an ancient civilization in eastern Anatolia, had always lived in an uneasy and self-conscious arrangement with the Turkish majority.

Turkish nationalists who saw Armenians as an internal threat to the country engaged in the kind of persecution and slaughter later made infamous in the Holocaust of World War II: tattoos, confiscation of assets, relocation, concentration camps, separation of families, rape, and death. Ohanesian, then, explores the contested ambiguities of Turkey’s wartime atrocities through her well-drawn characters and compelling plot.

The author deftly explores that Armenian inheritance of deep-in-the-bones trauma in her characters. On the one hand, the Armenian perspective reflects intense outrage, felt even a century later about what was perpetrated in 1915. On the other, Turks deny any governmental intention to wipe out huge numbers of Armenians. In the novel, Seda Melkonian personalizes these perspectives through a tale that begins “the way all ancient Armenian tales begin: Gar oo chegar…There was and there was not. You see, like all of life, a story is and is not.”

With this essential paradox of the Armenian experience, the author creates the tension that drives the revelation of secrets and awareness in her characters. Imbuing the story with a rich resonance of an abiding cultural sorrow, Ohanesian has constructed a narrative framework that allows both points of view to be told, albeit with a clear and informed allegiance to Armenian victims. The story shifts back and forth from 1915 to 1990 as chronicled mostly by a Christian Armenian, Seda Melkonian, and a Muslin Turk, Orhan Turkuglu, two generations apart.

Orhan travels from Istanbul to the family village of Karod where “time and progress are two long lost relatives who send an occasional letter.” Kemal, his grandfather and a successful rug maker, has disturbingly and mysteriously died in a vat of blue dye. His will distributes his textile business to Orhan and the family house to one Seda Melkonian in California.

Arguments ensue as Orhan’s father, Mustafa, feels disenfranchised and threatens suit over the will’s legitimacy. To head off conflict, Orhan flies to California in the hopes of buying the house from Seda for his father and aunt Fatma.

There, Orhan meets Seda at the Ararat Home for the Aging, where memorials and many photos of Armenians from the era of World War I abound. Learning of the bequest, Seda thinks about the house. “It’s as if Kemal put every painful memory in the shape of that ancient home, wrapped it like a Christmas present, and forced his grandson to deliver the gift.”

The unpacking of that gift into its component parts of family trauma, religious conflict, and love relationships provides the gritty dynamic of the novel. In flashbacks that are stories within stories, Ohanesian leads the reader through a disturbing journey of forced relocation marches of Armenians and horrific acts against innocents.

Through the powerful voice of Seda Melkonian, we follow two family histories. Through the voices of Kemal, Fatma, and Orhan, we come to understand reasons for familial silence and cultural sorrow.

A flawed, naïve, and detached Orhan is, in many ways, the lens through which the reader views the unfolding of political, religious, and personal stories. The reader experiences Orhan’s defensiveness, wonder, horror, and hope to arrive at certain truths. Orhan, then, embodies the paradox of Turkish and Armenian life and history: “There is and there is not.”

But he also embodies a way of reconciling and integrating opposing experiences and perspectives of the 1915 horrors through his family story. He sees meaning in his Turkish world very differently at the end. “I thought I had to be one thing or another. Not everything is black and white.” He wonders, “And if he is Turkish, what does that mean? Is he the prodigal son of a democratic republic or a descendent of genocide perpetrators? Maybe he is all of those things and none of them.”

In the end, despite the weaknesses of a somewhat obligatory debate about the Armenian question between Orhan and Seda’s activist niece, Ani, Ohanesian has left us with a heartbreaking, intimate narrative of generational trauma through her portrayal of her Armenian and Turkish families. This is a well-written and moving novel in plot, characterization, and description.

But, beyond that, Aline Ohanesian has extended an open-ended invitation to us who, like Orhan, need to consider the Armenian story (and all our family stories) differently. “All of life, Orhan realizes, is a story within a story; how we choose to listen and which words we choose to speak make all the difference.” Indeed, Ohanesian makes a difference.

Russell J. MacMullan Jr. is a former English teacher and head of several independent schools. He has written extensively to school communities on educational issues. He also writes poetry and short stories.