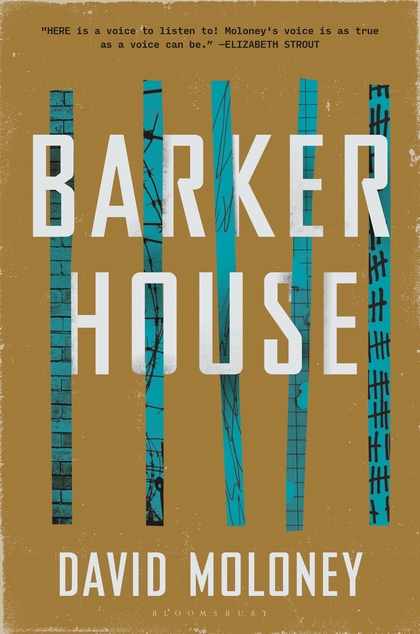 Several recent and noteworthy books have dealt with incarceration in America. Rachel Kushner’s The Mars Room examined a women’s prison; Tayari Jones’ An American Marriage explored the impact of incarceration on marriage; and Albert Woodfox’s searing memoir, Solitary, chronicled his many years spent in solitary confinement. Barker House, by David Moloney, takes up the prison narrative from a completely different perspective: that of the prison guard.

As I read this self-assured debut novel, I found myself wondering which was worse — the life of the prisoner or the life of the guard. Both Woodfox and Kushner paint brutal pictures of life behind bars, but at least prisoners can imagine life beyond prison is different. “Bag and baggage,” says one prisoner in Barker House as he’s about to be released. “The two best words a man wants to hear in this shithole.”

Correctional officers (COs) have no such delusions, writes Moloney. A former CO himself, he portrays them as stuck: with the people they guard and with their lives outside. These difficult lives involve drinking problems, dying parents, bad marriages, and unwanted children.

Menser, a slacker, is “thirty six, nine years into his own twenty year sentence with high blood pressure, unmarried.” He lives with his mother, who’s in the final stages of dementia. Then there’s Leon, an overweight loner who suffers from seizures. When his wife leaves him, saying that “happiness isn’t real,” he hates her “for being so concise.”

CO Scott O’Brien is a more competent employee than Menser, but he’s also an alcoholic with several DUIs. Tully is “a father, a homeowner, but the things he imagines he is supposed to enjoy are only enjoyable in the conceptual stage.” And at the top of the CO food chain stands Big Mike, a bookie whose father is dying of cancer.

In some tenderly written scenes, Big Mike helps one of the female inmates by keeping tabs on her daughter. Inmates “seemed to be somewhere they couldn’t find a way out of: drugs, sex, lies,” he explains. “The girls were imprisoned within themselves. I found myself attracted to this self imprisonment. I had a need to try and save them.” But Big Mike can’t solve his own problems, so how can he be expected to help others?

The only female CO in the book, Brenner, is one of the most interesting characters. She’s confident and, for the most part, honorable — but when she strip-searches the female prisoners:

Moloney highlights touching insights within the prison. In one attempt at normalcy, female inmates rub cocoa butter or lotion on the air vents to spruce up their cells. One of the women, the author reports, “smelled like the shampoo section at Target.”

In spite of the verisimilitude that lifted up many scenes, however, I sometimes found myself confused by the routine prison duties described in the novel. What was happening, for instance, when “the House was always running an academy so O’Brien was assigned an OC every six weeks. He’d only been an FTO for a few months when he found a shiv on Max”?

Or when “He told Carmichael they could do an easy controlled Escape Drill, a 10-13 on 43. They could also do an unclothed search on Hogan after he came out of his shower. Not to overwhelm him but O’Brien was sure they’d also be able to check off the task of supervising med pass”?

In spite of the sometimes baffling narrative, the problems the COs encounter — the seizures, the probable testicular cancers, the broken relationships — will stick with me, as will the fact that few narratives tie up neatly. The COs’ lives are like eternal sentences; there are more suicides among them than among the inmates. For the inmates, there are occasional rays of hope.

Amanda Holmes Duffy, author of a novel, I Know Where I Am When I’m Falling, is a book club facilitator for Fairfax County Public Library and has a weekly podcast, “Read Me a Poem,” produced by the American Scholar Magazine.

By Sten Nadolny; translated by Breon and Lynda Mitchell

The Strange Inheritance of Leah Fern: A Novel

An unusual young woman embarks on a journey of self-discovery.