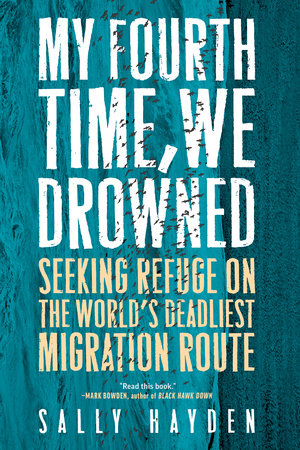 The Libyan government has collapsed. Militias vie for control of the country. People fleeing war, famine, and ethnic violence are stranded there and caught in a web of human smugglers, international red tape, and political machinations. The UN and the EU are ineffective and unable — or unwilling — to help.

This may sound like the introduction to a new thriller, but it is the context for a real-life humanitarian disaster unfolding in Libya and the subject of Sally Hayden’s My Fourth Time, We Drowned: Seeking Refuge on the World’s Deadliest Migration Route.

Hayden organizes the narrative around a harrowing journey that begins in East Africa. Migrants travel through Sudan to Libya, hoping to sail to Europe from there. Instead, their dreams of crossing the Mediterranean to seek refuge or work are mostly dashed, and they become pawns in a system designed to deny them entry to the nations from which they seek shelter.

Hayden differentiates the terms migrant, refugee, and asylum seeker in a helpful terminology section. In this review, I will use “migrant” in keeping with the title of the book. Along with the terminology note, a map showing the route would be helpful in subsequent editions.

Smugglers who bring migrants to Libya may sell them to militia groups that hold them for ransom, or else human traffickers may seize them. International relief agencies are feckless in the face of legal hurdles, lack of a centralized authority in Libya, and an unstable, dangerous environment. Migrants who do get spots on a boat may be intercepted by the Libyan Coast Guard and returned to detention centers.

Exhausted, desperate, and destitute, the migrants are virtually lost in the no-man’s land that Libya has become. They are crammed into overcrowded, unsanitary centers run by feuding militias and are effectively the property of whatever group controls a particular detention center. They are used as human collateral to extort more money from their families. They are routinely beaten, raped, and starved by mercurial guards who deny them access to medical treatment and to international aid workers.

Hayden’s reporting on the route began when she was contacted by a migrant on social media; her previous work had called his attention to her. He reached out to “sister Sally” with an urgent plea for help. The book is sprinkled with quotes in broken English from others who knew of her and prevailed upon her for help. The title is taken from one such quote.

At first, she was skeptical that the conditions they reported could be so dire and yet escape the world’s attention. Research convinced her otherwise. One in five migrants who tried to leave from Libya in September 2018 died or disappeared; only one in 10 made it to Europe, according to evidence Hayden cites from the Irish Times. The New Humanitarian, an independent nonprofit publication, reports that between 2014 and 2019, more than 19,000 people drowned in the Mediterranean on the route from Libya to Malta, giving it the distinction of being the deadliest migration route in the world.

The book is a damning indictment of the EU and UN for their failure to act on behalf of the migrants and, from Hayden’s perspective, for being complicit in their suffering. Subsidizing the Libyan Coast Guard, for example, not only stops migrants before they reach European shores, but also circumvents international law that prohibits returning migrants to dangerous homelands. Hayden describes self-congratulatory agencies seeking only to sustain themselves through continued funding, much of which ends up in the pockets of bureaucrats.

Diplomacy is a slow, complex business, but diplomatic efforts are not fully addressed in the book. Instead, Hayden dismisses high-level authorities as insensitive or willfully ignorant, often thwarting well-meaning staff on the ground. She gives little weight to what international organizations can reasonably be expected to accomplish in a failed state. “It was clear the UN was operating in difficult conditions,” she writes in a chapter otherwise filled with examples of how it came up short. Nonetheless, it is impossible to assess the failures of international organizations in Libya compared to the immensity of the need and not prioritize the latter.

The focus of the book is the humanitarian crisis, but one also sees what it’s like to be a working journalist. The journalist’s creed is to witness, accurately record, and truthfully report events. This requires uncomfortable travel to observe events firsthand, often in countries at war. (One trip had to be canceled when Hayden’s life was threatened.) It also demands painstaking work to validate sources. Hayden verified — in real time — reports of torture by contacting multiple sources; 47 pages of endnotes attest to the sourcing that underpins her reporting.

There are also ethical and legal pitfalls to navigate. When Hayden sailed on an independently run rescue ship, the mission head tried to use her for publicity purposes:

“I told him I was a journalist so could not fundraise for them and would not actively take part in rescues unless it was a life-or-death situation. I was there to document, not participate.”

She was careful about messaging migrants during the trip to avoid the risk of politicizing the mission or inadvertently motivating otherwise reluctant people to undertake the dangerous Mediterranean crossing.

Hayden has won several accolades for her reporting on migration and humanitarian crises. In addition, her bona fides include a law degree from the University College Dublin, lecturing at British and U.S. universities, and teaching at the British Broadcasting Corporation’s training academy. The evidence she presents in My Fourth Time, We Drowned is overwhelming. The facts argue for a more urgent and humane migrant policy.

The Scarlet Sisters: Sex, Suffrage, and Scandal in the Gilded Age

Too radical for their time, these women even confused Karl Marx.

Ever Green: Saving Big Forests to Save the Planet