A Navy SEAL and a Marine who were Naval Academy roommates become brothers in death as well as in life when buried side by side in Arlington National Cemetery. 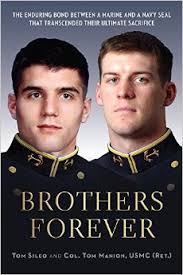 On Memorial Day, I was on the Mall in Washington, D.C., to participate in recitations of writings chosen to honor our military dead. Working under a deadline, I read Brothers Forever between assignments. The setting and the company of fellow veterans, all of whom, like me, had lost beloved comrades in battle, reinforced the message of the book. My fellow readers caught me with tears on my cheeks.

Travis Manion and Brendan Looney were inseparable friends, more like brothers than buddies. They were roommates at the Naval Academy and graduated together in 2004. Manion went on to become a Marine officer; Looney became a Navy SEAL. Manion died in combat in Iraq in April 2007; Looney was killed in a helicopter crash in Afghanistan in September 2010. They are now buried side by side in Arlington National Cemetery, brothers in life, brothers in death.

Brothers Forever, by journalist Tom Sileo and Col. Tom Manion, a retired Marine colonel and the father of Travis, traces the intertwined history of these two young men, the bond they formed at the Naval Academy, their rigorous training after graduation, and their time in combat. What dominates the story is the dedication, initiative, and self-discipline of both, who always egged each other on to greater achievement. Their careers took them across the globe, from Korea to Iraq, and Afghanistan.

Manion excelled as a Marine. In his brief career — of not quite three years — he received the best training the Marine Corps could provide and deployed twice to Iraq. Awarded the Silver Star, Bronze Star, and Purple Heart, he died assuring that two wounded men with him would survive. Looney, determined to be a Navy SEAL despite his color-blindness, left no stone unturned to join the elite force, and he became the Honor Man during his BUD/S (Basic Underwater Demolition/SEAL) training. He was universally admired and followed by those serving with him. He had completed 58 combat missions in Afghanistan; on his 59th, he died when his helicopter went down.

Throughout the narrative, those close to the young officers form the tapestry against which the reader follows the tale of two young men cut down in their prime. We meet the parents, siblings, friends, and, in the case of Brandon, who lived long enough to marry, a young wife who soon became a widow. The grief of all who knew the brothers-by-choice and how they supported one another throughout the mourning process moved me as deeply as the deaths of Brandon and Travis.

The story of Manion and Looney was already well known long before the publication of Brothers Forever. On May 30, 2011, President Obama recounted their history during his Memorial Day remarks at Arlington National Cemetery. He cited the epitaph written by Travis’ father, “Warriors for Freedom, Brothers Forever.”

The last two lines on Travis’ gravestone are “If not me, then who.” These were the words Travis used to explain why he had to go to war. And in a very real sense, they describe his death. He died to save others. The words haunt the text of the book.

As much as the story of Travis and Brendan moved me, I was distracted by writing flaws that pulled me out of the narrative. First, all the people in the book, including Travis and Brendan, are depicted as devoid of defects and so relentlessly heroic that I began to doubt the accuracy of the portrayal. They come across to me as stereotypes, not flesh-and-blood human beings.

Moreover, the writing often takes on a sentimental cast in emotional phrasing. Eyes welling with tears recurred so often that I began to watch for it. And the text tells us what was going through the minds of various players, especially Travis and Brendan, at crucial moments in the story, even during combat. I doubted that the authors could have known all those internal monologues. The telling felt contrived.

Finally, two elements missing from the narrative bothered me. First, combat is at best gritty, at worst ghastly, and the smells alone are enough to make the stomach heave. The reader here sees little of the fear, ugliness, or grisliness. Second, the war in Afghanistan is of questionable justification, and the one in Iraq was launched on the basis of what is charitably described as misinformation. That these two young men gave their lives in wars of dubious merit makes their deaths all the more poignant, a point apparently overlooked — or perhaps denied — by the authors.

What this reader was left with is a profoundly moving story — of two valiant and courageous young men who gave their lives for their country — told imperfectly. Their sacrifice would have been much more sobering had it been recounted in dispassionate prose that included human imperfections and the grisly face of war.

Tom Glenn spent many years in Vietnam on and was evacuated by helicopter under fire when Saigon fell. He is the Independent’s go-to guy on war and particularly post-traumatic stress injury. His Vietnam novel-in-stories, Friendly Casualties, was published in 2012. Apprentice House of Baltimore just published his newest novel, No-Accounts.