My Coney Island Baby: A Novel

A quiet love affair lies at the heart of this beautifully crafted story. 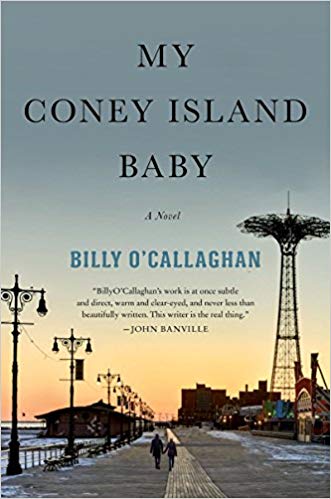 “The sky beyond the window now holds the final stages of this good afternoon light ahead of imminent dusk, and every layer of the past feels right there, a touch away,” writes Billy O’Callaghan in his second novel and fifth work of fiction, My Coney Island Baby.

Layered histories are a familiar topic for O’Callaghan, whose 2015 short story, “On A Wild, Red Dawn,” saw a 17-year-old resistance fighter killing a Royal Ulster Constabulary in Northern Ireland. The teen saddles the resulting trauma and carries his life forward in a solemn community that knows and accepts what he’s done; the matter, in this case, primarily that of a collective political history.

In My Coney Island Baby, O’Callaghan chronicles the lives of Michael and Caitlin, two married lovers in a long-term affair in New York. Here, the layered histories are eminently personal.

The novel opens on the Coney Island boardwalk, where Caitlin and Michael have met once a month for the past 20 years, consummating their affair in a motel nearby. Middle-aged, both are mired in marriages that have failed romantically, though not in a way that is anyone’s fault.

Michael and his wife, Barbara, suffer the death of their only child three years into an otherwise blissful partnership. After 14 weeks of commuting daily between suburban New Rochelle, New York, and the hospital, their newborn, who has never left the incubator, dies. The grief that follows knocks their marriage into a sort of purgatory, in which it remains.

O’Callaghan writes, “Barb and Michael, in abject fashion and with hardly a whimper, simply surrendered.” Michael and Caitlin meet not long after, and their affair structures the fundamental questions at hand in the novel: Which kind of love can feel like life, like a new and unexpected dimension of experience, and which kind can feel more like death?

In a particularly striking scene, Michael and Barbara leave the hospital for the last time. A small plastic bag with the baby’s unworn garments clutched in her hands, Barbara breaks down in the passenger seat. Michael sits, speechless, and switches on the radio:

“In the years to come, that will seem like a particularly callous action, but the truth, at that moment, was something far more helpless, and maybe more pathetic. Because her crying was unbearable.”

For Caitlin and her husband, Thomas, the situation is less traumatic: “Things had rusted into place for them as a couple. Silences lasted longer between them...spaces had opened up and they often went entire days without looking one another in the eye.”

At times, O’Callaghan’s descriptions blur the difference between the two logistically functional but romantically barren marriages. “Though they stopped short of an outright acknowledgment, they’d become separate people.” By the time Caitlin and Michael meet, it is possible, according to Caitlin, that Thomas carries on his own affairs.

If the two failed unions are indistinct, their aridity sets Michael and Caitlin’s enduring and illicit romance that much more apart, and it is their relationship that provides the slow-burning fuel of the novel. Aside from a host of recollections outlining their childhoods and adolescences, the entirety of the novel focuses mostly on the lovers on the boardwalk and, later, in a frigid, slowly warming motel room.

There is a kettle and bitter coffee cradled in Styrofoam cups. We learn, through another recollection, that Caitlin’s husband is considering a job that would take him to Peoria. Caitlin, we realize, is deciding how to tell Michael.

What O’Callaghan achieves in his descriptions of place, and especially of the Irish island Inishbofin, Michael’s birthplace, with its “dark, loamy earth,” counterbalances the frugality of the novel’s dialogue. “Sounds like a big deal,” Michael says when he learns of Caitlin’s potentially imminent departure.

Caitlin, Michael, and their supporting cast are not nearly as verbose as O’Callaghan’s exposition, which can, at times, seem too heavy for the delicate matters at hand — marriage, its inertia, history and stability, the love contained within it, illogical and unheeding — even in the way the text appears on the page, where paragraphs of description separate spats of diegetic, sequential dialogue.

As I finish this review behind deadline and amidst an increasingly impossibly fast media cycle, O’Callaghan’s novel seems imported from an earlier decade, complete with an earlier decade’s set of literary preoccupations. My Coney Island Baby is perhaps one of the few recent contemporary literary novels to eschew any claim to “timeliness.”

Technology fails to make a single appearance; politics is absent. The novel works more slowly and makes promises less grand and more familiar than most of its peers but tells the story I imagine O’Callaghan intended: a heartfelt, engrossing web of four intertwined lives strewn with tragedies and banalities, all bound together by an affair.

Daniel Weaver is a 2019-20 Fulbright Fellow living in Harbin and Beijing, China. Previously, he worked at East City Bookshop as social media and marketing coordinator from 2017-2019. His writing has appeared in Radii, Full Stop Magazine, and the Washington Independent Review of Books. He is on Twitter at @danielaxweaver.

The Shape of Family

Will tragedy bind a husband, wife, and their kids together, or rip them apart?