Mothertrucker: Finding Joy on the Loneliest Road in America

A bittersweet exploration of God, violence, and the power of friendship. 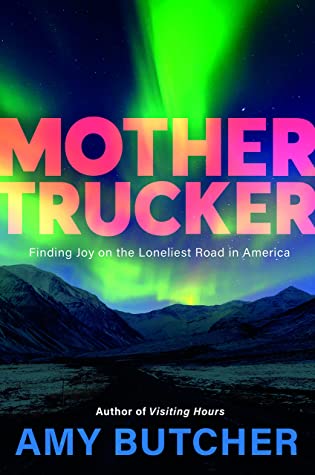 Amy Butcher's Mothertrucker: Finding Joy on the Loneliest Road in America could be called an “Instagram memoir.” The endearing, often grainy roadside photos of the Alaskan landscape that Joy “Mothertrucker” Wiebe posted on her IG page attracted over 9,000 followers. Butcher, however, was the only one of them who caught a plane north to meet Joy, climbed into her truck, and wrote a book about the experience.

On the surface, Joy and Butcher don't have much in common. Butcher is an English professor and writer in Ohio; Joy is the only female truck driver on Alaska's Dalton Highway, the most dangerous road in the U.S. As I read, I braced myself for a feel-good Cheryl Strayed knockoff, complete with parables about “reaching across the aisle” to make friends with those different from ourselves. It might make for an excellent nightly escape, but the deepest thing I expected to find in the book was the permafrost.

Instead, what I found was a meditation on what it means to be a woman in this country and a master class in the power of brutally honest writing. In her prologue, Butcher states:

“The year I met Joy was a consistently dangerous year for women in America. We were killed in public parks and parking lots, on sidewalks, and in our cars. We were killed, too, in basements and back bedrooms and on front porches while babies slept.”

Both Joy and Butcher had been victims of domestic violence — Joy by her first husband, and Butcher by a boyfriend who she had not yet shaken free of. Butcher is haunted by romantic-partner violence in other ways, too. In her first book, Visiting Hours, she recounts how a friend walked her home and then returned to his own house and stabbed his girlfriend 27 times, killing her, when she tried to prevent him from committing suicide. While this troubled friend isn’t a significant part of Mothertrucker, his ghost and Butcher's other experiences with dangerous men haunt the memoir to impressive effect.

Back in Ohio, a man named Dave waits for Butcher. He is passionate, a gifted musician, and he sweeps her off her feet. But he becomes abusive after the two move in together. The author's descriptions of the violence are as gutsy and compelling as they are unsettling, and her frank exactness pays off on the page. Joy's experiences aren't as overt as Butcher's, but her commentary and understanding tell readers she gets it.

In one scene, the women discuss Timothy Treadwell, the subject of Werner Herzog's film “Grizzly Man.” Butcher explains to Joy that Treadwell and his girlfriend Amie Huguenard were killed by the bears Treadwell loved, but Huguenard wasn't killed until after her partner had been mauled. “She didn't die because she stayed with the bear,” Joy replied. “A woman like that. A woman like us? She died because she stayed with the brute."

Oddly for a literary memoir, God comes up here a lot. Joy talks openly and often about her Christian faith, and early in the book, the women attend Joy’s church. Ironically, Joy’s faith overlaps with Dave’s. His mistreatment of Butcher begins after the two sleep together for the first time; he sees their behavior as “impure.” For her part, Butcher frequently recounts her futile attempts to become a believer.

All of this God talk made me — a member of the growing Millennial horde allergic to anything even close to evangelizing — queasy. But despite my discomfort, the choice to explore religion so openly did create narrative tension, and the parallels between Dave's Christianity and Joy's offered a complex dissonance that was a pleasure to parse.

Sadly, Joy passed away on August 23, 2018. (This isn’t a spoiler; her demise is revealed in Mothertrucker’s opening paragraph.) On the last leg of a solo trip, her truck overturned and crushed her. The final photo she took, a blurry sunset shot from a car window, graces her Instagram page; the caption below it announces her death.

While Joy is friendly, honest, and generous to a fault, her online persona existed pre-TikTok, pre-pandemic, and pre-January 6th insurrection. Since then, so many friendships across experience, place, and the political spectrum have snapped under the strain of the ugly divisiveness now rampant on social media and in the news.

Blatant politics don’t appear in Mothertrucker, yet as I read, I wondered how — or if — Joy and Butcher's friendship would have weathered the challenges the last two years have thrown at us. Would Butcher still have felt welcome by the other truckers at all those roadside stops? Would Joy’s charitable spirit have remained intact given so much societal ugliness?

More than once, I’ve heard people say they’re grateful that someone they loved didn’t live to see the state of our world today. Despite how much we might benefit from her insights right now, Joy Wiebe feels like one of those someones.

By Dan Abrams and David Fisher