A young woman perseveres to become a diver at the Brooklyn Naval Yard during World War II. 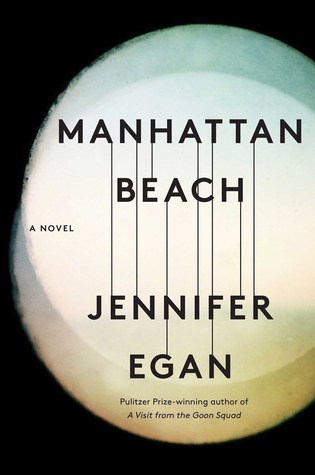 World War II introduced a profound shift in American society as men were drafted into the military and women into the workplace. Once women realized they could be relieved of the drudgery of housework and gain economic independence, there was no going back.

Since then, women have labored side by side with men on the factory floor, in white-collar jobs, and in the military and law enforcement. Jennifer Egan follows the story of one of those women in Manhattan Beach, her first novel since the brilliant, Pulitzer Prize-winning A Visit from the Goon Squad.

Anna Kerrigan is Rosie the Riveter, only in a dive-suit. We first meet her in 1934, as an 11-year-old who “might as well have been a boy: dust in her stockings, her ordinary dresses not much different from short pants,” accompanying her father, Eddie, on his rounds as a bag man who passes bribes and collects payments for an Irish mobster in New York City.

He takes her to the house of Dexter Styles for a fateful meeting that will result in Eddie’s disappearance a few years later, leaving Anna, her mother, and Lydia, her severely disabled sister, to fend for themselves.

Brave and capable, Anna is nonetheless haunted by the feeling that she is a “corrupt interloper bluffing her way through life.” On the surface, she is a good girl, a façade that she takes great pains to promote, going so far as to never let a sip of alcohol pass her lips when with her mother and aunt, even though she imbibes with friends.

In her early teens, she and a neighborhood boy experiment with each other’s bodies, “mov[ing] with the stealthy rapacity of burglars — initially, to repeat the raptures of their first encounter. But soon enough, layers of clothing began to yield to the marvel of bare flesh…Even as she spent her days aching to renew their dark dream, she felt as if it were happening somewhere else, to a different girl. In the dark paddock, she slipped from her life like a pin dropping between floorboards. I don’t know what you mean, I haven’t done those things, she imagined saying, truthfully, to a faceless accuser. I don’t even know what they are.”

These early encounters haunt her, and she is always keenly aware that her role as good girl is fakery.

When she strikes up a friendship with her male supervisor at the Naval Yards, her friend frets about how it will stain her reputation. “‘A reputation lasts,’ Rose said. ‘It follows you. It can interfere when you least expect, and there’s no way to erase it.’”

Despite their newfound freedom, society has a way of keeping even the most audacious women in their place: either be a Madonna, like the married Rose, or a whore, like Anna’s friend Nell, a kept woman living in a swank Gramercy Park apartment.

Anna, we are told by various male characters, is not like other girls. Fearless and not easily dissuaded, she endures sexism and physical challenges to become the only female diver at the Brooklyn Navy Yard, earning the respect of men with deeply entrenched views of a woman’s place. Though she suffers extreme loneliness, she is brave enough to live on her own — unheard of in that era — after Lydia dies and her mother leaves New York.

Eventually, Anna reconnects with Dexter Styles, introducing herself by a different name so he doesn’t associate her with the man who used to work for him. After their relationship deepens, she confesses the truth, and Dexter agrees to show her where her father’s body is, telling her, “You’ll need your diving suit.”

Like a virtuoso conductor, Egan deftly arranges the polyphonic viewpoints of Anna, Eddie, and Dexter, with a few heartbreaking solos from Lydia, sometimes switching narrator mid-chapter without distracting the reader or interrupting the rhythm of the story.

How does it feel to don a 200-pound “dive dress” and descend to the bottom of the murky waters roiling the shores of New York City? What is it like to be shipwrecked for weeks? How are shady back deals made in the criminal “shadow world” and in the well-appointed mansions and country clubs of the ruling elite? Egan takes you there, and you believe every moment of it.

Some readers may disagree with Anna’s fateful decision toward the end of the book. Is it a brave declaration of feminine independence, or is it submission to tradition? It turns out that Anna can have her cake and eat it, too, as the story is neatly wrapped up with mostly happy endings all around.

Ultimately, the demanding reader might seek more profundity in a work from a Pulitzer winner, but that is just lit-crit nitpicking. Manhattan Beach is a ripping good yarn, bursting at the seams with evocative historical details, well-versed in the nomenclature and mechanics of WWII-era nautical and diving practices, brimming with memorable characters and thrilling action, all described in resplendently vivid prose.

Another felicitous outcome of World War II has been a treasure trove of notable novels, some of them even written by women.