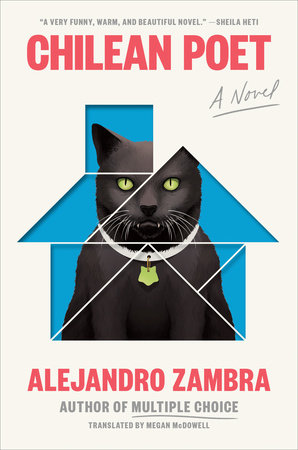 While reading Alejandro Zambra’s Chilean Poet, I wondered if a picaresque can stand still. The author, himself an established poet, has created in his new novel a world full of emotional and intellectual adventures that never wanders far from Santiago, his native city.

The story opens with Gonzalo, a budding poet, and his lover, Carla, reveling in their mutual sexual discovery. Then they break up, and we move ahead nine years. After a chance meeting, the two resume their affair and settle into a happy domesticity, with Gonzalo taking on parental duties for the son Carla had by a marriage begun and ended during that nine-year hiatus.

The bond between Gonzalo, still committed to becoming a poet, and his stepson, Vicente, is rich and emotionally interesting. Gonzalo takes the relationship seriously and chafes under the title stepfather since he is more involved than the boy’s biological father. Vicente is smart, funny, and willful and makes a wonderful character.

For her part, Carla views Gonzalo’s attention to both her and her son as a given. While she seems realistic and well-drawn, she is the least interesting figure in the novel, perhaps because she remains indifferent to poetry. When Gonzalo is invited into a Ph.D. program in New York, she refuses to go with him, ends their relationship, and — despite their closeness — discourages Gonzalo’s contact with Vicente.

Another jump ahead, this time eight years, and we focus on Vicente. He is about to graduate from high school but refuses to attend university because conventional education will not help him become a poet. He soon meets Pru, a comically inexperienced American journalist who has flown to the wrong airport and thus has to abandon her article on the mountains in favor of one on Santiago’s poetry scene. Vicente and Pato, a chubby and pretentious young man a few years Vicente’s senior, become her guides to Chilean poets.

Pru is funny and engaging, and her relationship with the much younger Vicente is charming and believable. However, that relationship recedes into the background as the novel becomes a love letter to the country’s poets. Through Pru’s interviews, we get portraits of a dozen or more poets, many of them witty, fierce, and independent. Zambra satirizes the competitive backbiting and petty rivalries within the poetry community, but his depictions are lovingly done, and one imagines a cameo in the novel will give the real-life poets bragging rights for years.

We see in these writers a population committed to a somewhat knee-jerk leftism, with everyone spouting ritualistic invectives against capitalism and fascism. But it’s also clear that many of them suffered tremendously under the brutal Pinochet dictatorship, which is referred to frequently but never discussed in detail. Says Pru:

“The world of Chilean poets is a little stupid but it’s still more genuine, less false than the ordinary lives of people who follow the rules and keep their heads down. Of course, there is opportunism and cruelty, but also real passion and heroism and allegiance to dreams.”

Eventually, Vicente gets a job at a popular bookstore where, one day, Gonzalo — back from New York and teaching in Santiago — walks in. The final section of the novel focuses on the gentle renewal of their relationship, the way it was cut off, and how it might be defined moving forward. This, too, is enmeshed in the world of poetry as the two men read each other’s work and constantly recommend poets to one another. Here, Zambra teases fellow poets for never admitting to not having already read something a peer suggests.

Despite the close attention to these relationships, and the arc of Gonzalo and Vicente’s relationship in particular, the plot sometimes wanders. Long digressions to recount sexual exploits and embarrassing bowel movements feel like, well, digressions. But the prose is always delightful: taut and funny and full of moments that capture emotions with vivid honesty. I found myself rooting for Gonzalo to write better poetry, for Vicente to sleep with Pru, for Pru to produce a good article, and certainly for Gonzalo and Vicente to find each other again.

Credit for much of that emotional connection must go to Megan McDowell, an accomplished translator shortlisted several times for the Booker Prize. While laughing out loud at parts of this novel, I could see why she is so esteemed.

If you’re interested in poetry, Chilean Poet offers a mini introduction to contemporary Chilean work. This includes heavy-hitters like Pablo Neruda and Gabriela Mistral, lesser-known figures like Gonzalo Rojas, an important poet (and the protagonist’s namesake) who died in 2011, and poets just beginning to be known in the U.S., such as Tania Miralles.

If you’re not particularly intrigued by poetry, the community and characters portrayed here, and the ebb and flow of their relationships, will keep you reading anyway. Zambra’s frequent, sudden weaving in of pop-culture references — from Raymond Carver and Amy Winehouse to “Finding Nemo” and Guns N’ Roses — only adds to the liveliness. Taken together, it all gives Chilean Poet an irresistible richness and the feel of an adventure — without once leaving the neighborhood.