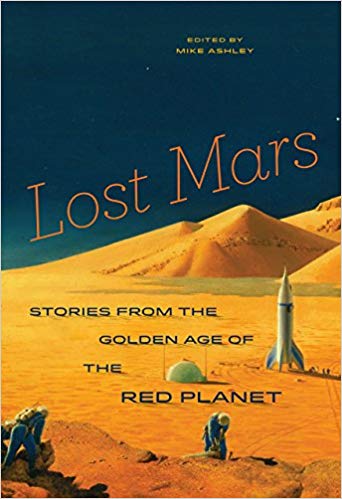 Mike Ashley’s Lost Mars: Stories from the Golden Age of the Red Planet is an anthology unclear in its purpose. The introduction opens with a brief history of humans’ observations of Mars starting with Galileo, moving through the discovery of its moons, and culminating in Italian astronomer Giovanni Schiaparelli’s 1882 revelations that there were canali — Italian for channels, but misinterpreted by the rest of the world as canals — on Mars.

It was this mistranslation that inspired the idea of vast Martian civilizations so technologically advanced that they could irrigate the entire planet using water from the polar ice caps. And because of the way the canals captured the public’s imagination and ushered in a wave of science fiction, Ashley uses Schiaparelli as his starting date for the “Golden Age of Martian fiction.”

He lists many, many stories and novels set on Mars from this period to the present, and groups them thematically, with each work summarized in a single sentence. But there is very little analysis as to why the themes arose at the various times they did.

For many writers of the late-19th and early 20th century, Mars was a blank slate that allowed them to project their ideas and ideals about what a society should be. Most everyone agreed that Martians were more advanced than humans, meaning that they had moved beyond war, or had created a feminist utopia, or were even a race of pious Christians.

But Ashley does not address why using Mars as a thought experiment was the default approach. At some point during this “golden age,” Mars stopped being a utopia and became a mirror for the class inequality, exploited labor, and environmental disaster on Earth, but there is no discussion about how that shift took place.

Ashley acknowledges the significance within Martian fiction of H.G. Wells’ The War of the Worlds, which introduced the idea of malevolent Martians, and Edgar Rice Burroughs’ John Carter saga, which set the standard for romantic adventure, but he does not investigate the implication of those changes in Martian fiction — for instance, whether they follow trends in other kinds of contemporary fiction, which might better explain common themes.

The absence of deeper criticism would be a minor disappointment if the stories were all fun, but most of them feel more like curiosities than hidden gems. Starting in 1887, the earliest ones are unconcerned with explaining exactly how the intercourse between the worlds takes place, using fantastical literary devices such as a crystal ball (H.G. Wells), near-instantaneous Martian message airdrops (George C. Wallis), or letters from winged Venusians (W.S. Lach-Szyrma).

They are unsatisfying and, in the end, the way the 19th century characters talk about turning on electric lights or the promise of science is almost more interesting than their awkward fantasies of Martian life.

As the 20th century progresses, there are better attempts at realism, which amounts to a lot of stories about mining and the harsh conditions under which it is done on Martian soil: the weak air, the radioactivity, and, in the pulpy melodrama “Without Bugles” by E.C. Tubb, the never-ending battle against dust that fills and destroys people’s lungs. The similarity in the settings and the reasons for being there makes it feel as though the authors had a true shared experience, but it also makes the stories a little indistinguishable.

The best stories are by the names you know: Ray Bradbury and J.G. Ballard. In this way, Lost Mars is reassuring that work of real quality rises to the top, and if you only read the “greats,” you probably are not missing too much. Both of their stories remain in print elsewhere.

In “Ylla,” from The Martian Chronicles, Bradbury’s writing shines in comparison to all of the stories in the volume that precede his; long, languorous sentences evoke a dreamlike reality. A story about a Martian couple that is as much about mid-century gender roles as it is about first contact, “Ylla” makes the Martians specific and personal instead of a generic “other.”

Ballard’s mournful “The Time-Tombs,” about a band of graverobbers living at the edge of the Martian desert, is a careful exploration of mortality and immortality. Like Bradbury, Ballard’s writing stands out as beautiful and expert, and his vision of Mars as nothing more than the husk of a dead civilization — instead of a source of natural resources — is unique.

Any fan of old science-fiction magazines will find stories to enjoy in Lost Mars, but if you’re looking for a more nuanced examination of how the red planet functioned in the minds of the people who chose it as their milieu, you might be disappointed. And if you are looking to read a quality collection of short stories set on Mars, you might do better to just read The Martian Chronicles.

Ariel S. Winter is the author of the novels The Twenty-Year Death and Barren Cove, and the children’s picture book One of a Kind. He lives in Baltimore.

A powerful, fictionalized account of a family haunted by the Armenian genocide.