Lost Girls: The Invention of the Flapper

The sequins and tassels were about much more than fashion. 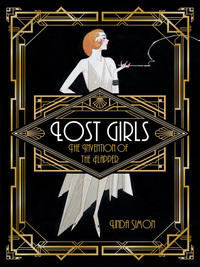 The term “flapper” is the slap of beads against the thighs of a dance-hall girl. It’s the clink of a scotch glass and the click of F. Scott Fitzgerald’s wingtips hitting the pavement. It is the smoky swirl wafting from the tips of cigarettes.

Linda Simon’s new book, Lost Girls: The Invention of the Flapper, is not about this visceral fantasy of loose girls in drop waists. Instead, it’s a careful, sometimes gritty look at exactly how British and American women rose from a Victorian world of corsets and social constraints to one in which they could at least imagine they wielded as much power as men.

This is not a book for your friend with a fetish for the musical “Chicago” or The Great Gatsby. Out of its 256 pages, the first 200 focus on the period just before the Roaring 20s. So if you have a pal who just binge-watched “Downton Abbey” for the 40th time, this book will provide the perfect primer on why the Crawley sisters always seem so darned frustrated.

The title is an ode to the Lost Boys from Peter Pan. It is a genius choice for many reasons. First, and most obviously, the Lost Boys are forever young. Simon explains in the early chapters that, often, intelligent girls who’d just hit puberty were fetishized. They were seen as both constantly in danger of losing their virtue and running wild, or becoming future victims of hysteria or dangerous men who might lead them astray.

One of the creepiest parts of the book is the first chapter, where we learn about Mark Twain’s “Angel Fish,” a group of young women he kept around as companions. While he portrayed himself as a father figure, things often got weird, and he wrote about wishing to be a younger man.

Peter Pan also applies to the appearance of the flappers themselves. Many of the actresses who’ve played Peter over the years have been young and boyish, with a sense of androgyny and an almost-femininity. These same qualities lay just beneath the surface in women’s fashion and identity.

Simon explains that while political and familial spaces for women were changing bit by bit, it was their appearance on the social scene that rocketed them forward. The inventions of dance halls and movie theaters were the places girls found their stride. Here, they saw pictures of the American West and fancied themselves cowgirls out to conquer the frontier. They saw glamorous examples of working girls and heroines portrayed in all-new ways.

Simon tells us that social spaces were crucial to the development of the flapper. On the dance floor, they could flirt, swing, and fraternize with men in a way they never had before. Despite the fretting of their parents, there was no turning back; a new, chaperone-free age had begun. Not only was a flapper able to foxtrot with the boys, but in a world where the male population had been decimated by the Great War, she was joining them in the workforce, too.

Linda Simon is the author of several other books, including Coco Chanel and The Greatest Shows on Earth: A History of the Circus. It’s clear she is a gifted researcher, and each piece of information she provides seems to bloom with nuance and careful understanding of the time, place, and people she writes about.

However, Lost Girls is not a page-turner, and it takes a bit of work to get through. In some places, I wanted it to focus more on the women and their perspectives than on the men who felt threatened by them.

Simon helps the reader see that, to understand the flapper, you must grasp what she was up against. Just like the sisters from “Downton Abbey,” girls during the turn of the last century faced a minefield of mixed messages and cultural anxiety. They were oppressed and objectified because their sexual, political, and economic freedom was viewed as a threat to the very existence of a civilized world.

Given the recent — and not uncommon — headlines about rampant sexual predation in Hollywood and elsewhere, I couldn’t help but ask myself: How much has changed?

Infused with humor and pathos, these stories by a prize-winning writer re-create the vanished world of Jewish neighborhoods in the Depression era.