City on Fire: A Novel

This piercing tale’s emotional precision distinguishes it from its author’s recent bestsellers. 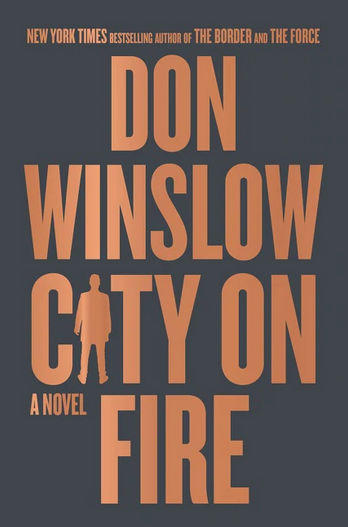 Don Winslow is today’s maestro of sprawling, testosterone-drenched Feds v. Mexicartel sagas. His trio of chart-toppers preceding this new book is big, brassy, and bloody. The three set the colliding bureaucracies of drug cartels and their U.S. government antagonists against a gory backdrop where all-too-casual realpolitik spurs on tactical escalations from both sides.

In The Power of the Dog, The Cartel, and The Border, Winslow appears to be going for an extended wide-angle epic, with after-action pullbacks revealing jungle clearings studded with steaming corpses. Even so, the bestselling trilogy is perceptively written. Beyond the spray of blood and bone, we witness real humans (at least among the good guys) driven to harsh action by zeal, a sense of duty, or misplaced valor.

You can call these books pulp or formula fiction, but that’s selling Winslow short. Before the current City on Fire hit the shelves, I often caught myself admiring, somewhat begrudgingly, the author’s storytelling gifts and his moral energy, though not his market-pleasing pyrotechnics. With City on Fire, in which Winslow effectively tightens his lens on the people at the core of his story, I’ve become a fan.

The novel depicts a savage entanglement — Winslow’s usual métier — but with a closer, more empathetic focus on his principals. Yes, the criminal trappings still loom large, but the action unfolds in 1980s Rhode Island, where working-class Irish American and Italian American family gangs collaborate uneasily in the baseline illegalities of the day: labor racketeering, hijacking, extortion, prostitution, and the occasional killing. They leave drug peddling to others, at least early in the story.

The households of the two leading families even vacation in the same coastal town, sharing the beach and regular barbecues. Then, one day, Paulie Moretti, an aging capo, brings his new upper-middle-class girlfriend to the beach. Danny Ryan, the novel’s Irish protagonist, takes note:

“Who knew that Paulie could pull a girl like this? Every guinea’s dream of a white woman. And it would have to be a freakin’ Pam. Not a Sheila, a Mary, a Theresa. A Pam…

“She has a voice like sex, low and a little gravelly — they all feel it, even the women, and it triggers a little tremor through the group.”

Pam’s arrival soon causes a fatal rift. Ian Murphy, Danny’s “Kennedy handsome,” addle-brained brother-in-law, takes his shot at Pam and successfully claims her for himself, humiliating Paulie in the process. And so, with this very familiar backstory, a war begins.

Winslow builds his novel on this Homeric foundation, the catastrophic struggle for ancient Troy triggered when Trojan prince Paris woos away the bride of Spartan king Menelaus. But Winslow’s primary model in his updated version seems not to be The Iliad but Virgil, Homer’s latter-day Roman heir, whose Aeneid describes the fraught escape of the defeated Trojans from their burning city.

For this reader, a former schoolboy Latinist nurtured on Virgil, Winslow’s reanimation of these towering shades plays out as richly original, believable, and inspiring. It’s also subtly integrated into a modern-age narrative.

Still, the presence of these submerged echoes may strike others as forced: Danny (Aeneas), his ill-fated wife (in Troy, she’s lost in the fog of war; in Rhode Island, she’s felled by cancer), plus his young son and his stubborn father. Intervening on and off, as in The Aeneid, is Danny’s distant mother. In Virgil, she’s the goddess Venus; in Winslow, she’s a former Vegas showgirl, a wealthy femina ex machina.

Familiarity with these archetypal stories isn’t essential to an appreciation of City on Fire, however, and there’s much to appreciate here. It’s a brilliantly crafted tale in its own right — standing apart from its classical model — a moving evocation of familial and marital love, of friendship and loyalty, and of redemption from near-tragedy.

Bob Duffy is a Maryland author and retired ad executive.