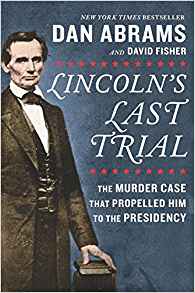 For those who wonder why Abraham Lincoln’s hold on the American psyche never slips, the answer is simple: The superior wisdom he consistently demonstrated in the political, rhetorical, military, and legal arenas is unmatched and timeless.

This assessment is especially true of Lincoln’s career as a trial and appellate lawyer in and around Springfield, Illinois, from 1837-1860. Bringing new recognition of his courtroom skills into the mainstream, ABC News’ chief legal analyst Dan Abrams and veteran collaborator David Fisher have delivered a fascinating depiction of Lincoln’s Last Trial: The Murder Case That Propelled Him to the Presidency.

After the 96,000 documents contained in the Lincoln Legal Papers were gathered between 1985-2000 from old Illinois courthouse records, followed by their being archived and put online by the Lincoln Presidential Library, a much deeper awareness of the specifics of his legal career has become possible. The papers have proven to be a mother lode for new historical research and analysis, leading to the publication of many fine books devoted to “Lincoln the lawyer” over the last decade.

Surprisingly, until Messrs. Abrams and Fisher took the initiative, there was no book giving complete coverage to Lincoln’s service as lead defense counsel in the four-day murder trial State of Illinois vs. “Peachy” Quinn Harrison during the late summer of 1859, which took place seven weeks after Harrison stabbed Greek Crafton to death in a small town outside Springfield.

Many aspects of the Harrison trial made it spellbinding and important. The decedent’s brother was unhappily married to the killer’s sister, and the spouses’ discord had arisen from the husband’s alleged abuse. The families of the victim and the murderer were socially prominent in Springfield and also longtime friends and political supporters of Lincoln.

An esteemed local pastor, Peter Cartwright, was the defendant’s grandfather and became a star witness in the case because he heard Crafton’s deathbed confession acknowledging he had been the instigator of the fatal incident and, therefore, bore no animosity toward Harrison for having defended himself after being attacked.

The case turned on two legal questions in the unsettled areas of law involving self-defense as a basis for claiming innocence of a crime and the admissibility of hearsay testimony under the Dead Man’s Rule. The case is especially noteworthy because it was fully reported in a transcript prepared by leading early stenographer Robert Hitt, the man who made the complete record of the Lincoln-Douglas debates the year before the trial.

In their write-up of the Harrison trial, the authors provide a stellar depiction of Lincoln’s performance as a masterful litigator using courtroom talents in 1859 that remain equally effective in 2018. Want to build rapport with a jury? Be concise in every facet of the case, avoid histrionics, use humor, talk to jurors as a friend, and build a well-crafted story out of the facts — like Lincoln did.

Want to stay in good standing with the judge through a trial? Limit objections to only the most important issues, argue the law forcefully but with precision, and stay in a mode of intellectual honesty — like Lincoln did. Want to dazzle in cross-examination? Fully explore an opponent’s position until holes are found, remember every word from an adverse witness’ mouth, and then jam his testimony into inconsistent positions lacking credibility — like Lincoln did.

In addition to his powers of persuasion, Lincoln’s big-picture perspective on law and justice ring true in the 21st century just as they did in his era. He refused to handle a case unless he believed the client was in the right. His law partner, William Herndon, said Lincoln “struggled for justice, throwing aside forms, methods, and rules, until it appeared pure as a ray of light flashing through a fog bank.” He staked his career on the premise that “reverence for the law should become the political religion of the nation.”

Six months after the Harrison trial, Lincoln found himself at the college known as Cooper Union in New York City in February 1860. There, he gave “the speech that made him president.” In that address, he delivered an airtight argument opposing the expansion of slavery into the country’s western territories.

The skills he showcased on that unseasonably warm night in Manhattan aligned with those he had demonstrated in Springfield during the hot summer days of the Harrison murder trial: steadfast integrity, a careful choice of words to fit his audience, a vocal presentation that gained momentum from beginning to end, and a total command of his subject matter.

Dan Abrams and David Fisher’s book adds a new layer of understanding about how Lincoln’s mind worked as a consummate trial lawyer, and how that mind provided the platform for his political prowess. More than a century and a half after his assassination, books like Lincoln’s Last Trial serve to inform readers of the man’s unique genius that has led to our unwavering recognition of him as our nation’s greatest hero.

Talmage Boston is a commercial litigator and historian in Dallas, Texas. His most recent book is Cross-Examining History: A Lawyer Gets Answers from the Experts about Our Presidents (Bright Sky Press 2016).