Dead Wake: The Last Crossing of the Lusitania

A masterful account of the doomed ship whose sinking prefaced America's entry into the Great War. 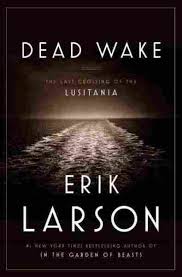 We are in the midst of the centennial commemoration of World War I, arguably the first total war and one that has had an enduring impact on our world. Various milestones will be observed over the next three years, and May marks the 100th anniversary of the torpedoing and sinking of the luxury British passenger ship RMS Lusitania.

Although perhaps now a footnote story of the war before America’s entrance, the Lusitania has attracted considerable interest over the years. In addition to articles and survivors’ memoirs, at least a half-dozen books have been published since 2001 alone. Now we have Dead Wake, a dazzling account by noted narrative nonfiction writer Erik Larson.

Larson has written several bestsellers on eclectic topics over the past 15 years. He tackled a serial killer at the 1893 World’s Fair in Chicago in The Devil in the White City; a catastrophic hurricane in Galveston in 1900 in Isaac’s Storm; and, mostly recently, a chilling account of pre-World War II Nazi Germany with In the Garden of Beasts. Dead Wake follows Larson’s successful script of painstaking research, extensive and absorbing detail, and, most of all, suspenseful storytelling.

The facts are straightforward. The pride of the Cunard Line — a swift “greyhound” — set sail from New York on May 1, 1915, for a trans-Atlantic crossing with nearly 2,000 passengers, including 159 Americans. The war had been under way for nine months. Although the United States was a neutral country, Britain was the most prominent adversary of Germany, which was aggressively using U-boats to disrupt shipping. The Lusitania was struck by a torpedo while steaming through the Irish Sea; it sank in 18 minutes. More than 60 percent of its passengers perished.

Larson brings this story to life, turning an historical event into a page-turning thriller. He does this with masterful character development and an alternating chronological presentation of what took place during those last six days on the luxury liner and the submarine that lay in wait for it.

The most intense character studies are those of the aloof but able Captain William Thomas Turner of the Lusitania and the equally professional captain of the German U-20, Walther Schwieger, who had few qualms about attacking civilians. Their actions — coupled with a certain degree of luck and perhaps fate — were responsible for what became the most tragic maritime disaster since the Titanic three years earlier and one of the most notable of the 20th century.

The book is replete with other rich characters, mostly passengers on the doomed ship. One of the most interesting is the Boston book dealer Charles Lauriat, who brought aboard a rare copy of A Christmas Carol by Charles Dickens and drawings by novelist William Makepeace Thackeray. Another featured personality is Theodate Pope, a feminist, architect, and spiritualist. Both survived.

Among the strengths that Larson exhibits in recounting lesser-known figures is his ability to draw comparisons with well-known people. There is Dudley Field Malone, the New York collector of customs, who “was said to be a dead ringer for Winston Churchill.” One German naval leader is described as a doppelganger for the actor Peter Lorre, and — sure enough — photos confirm it.

Churchill, who was First Lord of the Admiralty at the time, also appears in the book. He comes across as himself: shrewd, demanding, controlling, and secretive. This was, of course, one war removed from his greatest achievement of rallying Britain to victory.

A world leader who features more prominently is President Woodrow Wilson. But this is a commander-in-chief distracted by the death of his first wife and ardent courtship of his second, Edith Bolling Galt, a Washington, DC, widow. Wilson, although upset about the sinking of the Lusitania and the resulting deaths of 123 Americans, worked to avoid the United States’ engagement in the war for another two years.

An important backstory presented by Larson is the existence of a secret British code-breaking office, Room 40. The British were tracking the movements of the U-20 and were aware of the position of the Lusitania, but did nothing to alert or protect the liner for fear of revealing their work.

Larson also shows how the Lusitania was unprepared for an attack, despite advance public warning from the Germans themselves that it could be a target. There were no lifeboat drills for passengers, for example, and many died because they did not know how to properly wear a life jacket.

Dead Wake deals with an event forever bound to a great war, but the story Larson weaves is a gripping narrative of a diverse group of people, how they lived and how they died. He leaves us with the feeling that this tragedy might have been mitigated or maybe even avoided.

A sweeping, cross-disciplinary analysis of what makes a state succeed — or fail.