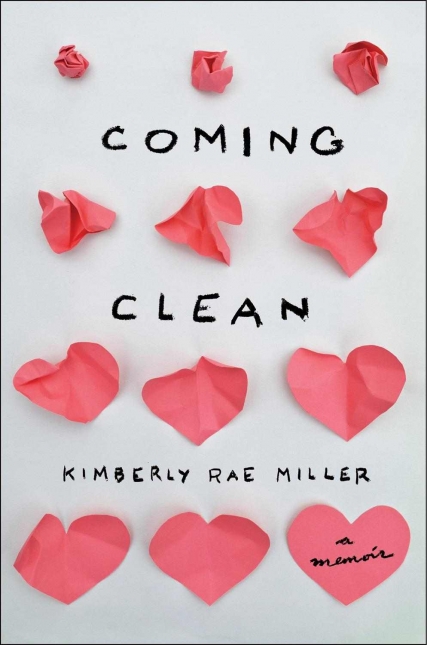 At the heart of Coming Clean, a memoir by Kimberly Rae Miller, lie two equally mysterious phenomena, one as timely as the other is timeless. Hoarding, the first, has only recently entered the popular lexicon while the second, familial love, spans the ages.

Miller’s father, wounded by his own parents’ alcoholism, and her mother, who suffers from scoliosis, open their common bond of pain just enough to admit Kimberly Rae when she’s born three months prematurely. “I believed,” Miller writes “that my parents loved me into living, that the three of us were meant to be a family, and that I was going to be a miracle, if I could only figure out how.”

Coming Clean is the story of Miller’s struggle to perform that miracle. Beginning with her early childhood on Long Island, the story continues through the squalid conditions of her teen years, an attempted suicide in college, and her outwardly successful but nightmarishly beset inner life as a young actress. Throughout the book, Miller tries to reconcile her shame over her parents with disgust at herself for being ashamed of two flawed but loving people.

The hoarding begins with Miller’s father, a dreamy man who “loved everything in the world so much that he had to live with it all,” and whose behavior flips Miller into the role of protector. Whenever the family enacted its ritual argument, Miller’s mother would rail against her husband’s accumulating mess, he would walk out the door and Miller would rage at her mother to deflect her greatest fear — that her father would degenerate into a faceless street person sitting on a park bench beside bulging plastic bags.

Eventually Miller’s mother leaves her father and takes Miller to Brooklyn to live with her own mother. But when the house on Long Island burns down, the little family reunites into its familiar trinity, and Miller’s parents use the insurance money to buy an even larger place, again on Long Island. There, following two unsuccessful surgeries to correct her scoliosis, Miller’s mother sinks into depression where she discovers the Home Shopping Network, and soon becomes an accomplice to Miller’s father.

This second house, which once held the promise of a fresh beginning, quickly deteriorates into a state worse than the first. The heating system fails. Two of the three bathrooms stop working. Pipes burst, and floors become sodden. Vermin invade. “The downstairs had become a relative swamp ground. It never seemed to dry out from the flooding, so when we did walk through it, the inches of trash would squish beneath our feet, creating an unsteady terrain. The living room, dining room, and den — spaces I thought my father would never find enough things to fill — had floor-to-ceiling piles of boxes and bags of paper and knickknacks, things that had been purchased and put down and long forgotten. We gave up the kitchen and survived solely on fast food and hermetically sealed snacks we could keep in our bedrooms.”

Given the horrid conditions of Miller’s childhood one might ask: Where is the love she professes to have felt from her parents? The truth is that Miller’s parents never let their love of stuff override their love for her. From the time Miller was very young, her dreamy father engaged with her as if she were another adult, one whose opinion he respected — a very flattering and ego-boosting form of discourse for a child as bright as Miller.

Miller’s mother, her more resourceful parent, finds acting lessons for her painfully shy adolescent daughter, an activity that lays the foundation for Miller’s eventual career. When Emerson College revokes Miller’s scholarship, her mother gathers enough initiative to sell the squalid Long Island house and use the money to send Miller back to Boston. Later, when her mother is recuperating from a botched gall-bladder operation in Miller’s Brooklyn apartment and begins crying because Miller has to hold her while she takes a shower, she apologizes, saying, “I’m so sorry, Kimmy. You shouldn’t have to do this.”

“Mama, there’s really no one else in the world I’d like to hang out with,” Miller replies.
“Oh boy, do you need a boyfriend.”

This exchange, so candid in its acknowledgment of bodily need and human desire, illuminates the profoundly intimate bond Miller shares with her parents. Coming Clean would have benefited from more fully developed scenes like this. At times Miller seems to have sacrificed her story for the sake of her book, rushing over potentially revealing scenes to get it into print while her topic is still au couraunt. That’s a pity because Miller has a sharp eye for the telling detail and a measured, uncomplaining tone; she could have produced a longer but still engaging book.

Given the similarities between Coming Clean and the hugely successful The Glass Castle by Jeannette Walls — both memoirs are by young women who emerged from extreme privation to become New York media stars — perhaps some over-eagerness on the part of Miller and her publisher is understandable. Walls’ story, however, has many more characters and unfolds over 3,000 miles, and Miller’s is narrow both in its cast and focus. But more importantly, Walls’ story is one of escape, while Miller’s is of a journey into understanding, always a high-risk venture.

In that she comes to accept that there are no miracles and that she cannot “fix” her parents, Miller has been successful. One hopes her honest, sensitive memoir also is.

Patricia Schultheis has had several essays and nearly two dozen short stories published in national and international literary journals. Her pictorial local history, Baltimore’s Lexington Market, was published in 2007, and her collection of short stories titled St. Bart’s Way was a finalist for the 2008 Flannery O’Connor Award and Snake Nation Press awards. She has been a fellow at the Virginia Center for the Creative Arts, has served on the editorial boards of The Baltimore Review and Narrative and is a member of The Author’s Guild as well as a voting member of The National Book Critics Circle.