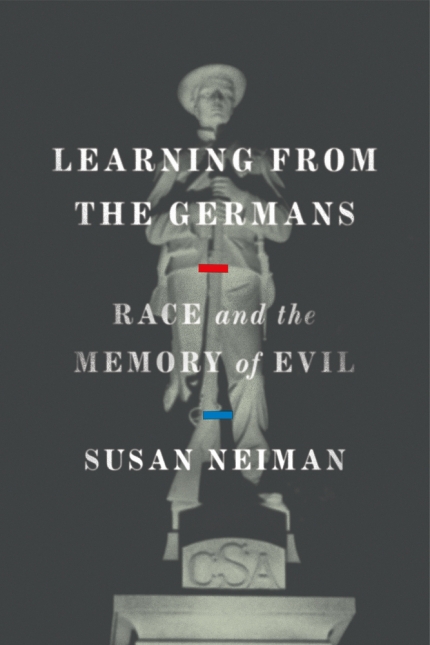 Are you like me, a fragile white person just trying to look cool? Do you want to believe that because you read The Autobiography of Malcolm X in high school you understand how racialized America is? At the same time, do you suspect that you’re complicit and just don’t want to socialize that knowledge?

Did you ever hope race would come to mean nothing someday?

According to author/philosopher/director of the Einstein Forum Susan Neiman, who grew up Jewish in Atlanta in the 1950s, and who has lived and worked in Tel Aviv and Berlin, race will never mean nothing in America. But, since she has studied contemporary Jewish life in Germany and feels somewhat at home in the 21st-century South, she declares a different kind of hope.

Her new book, Learning from the Germans, is structured in three parts, the first of which covers the crimes and shame of the Nazi generation and the ways that Germans were made to “work off” the taint on their collective honor.

Neiman doesn’t replay scenes from the Holocaust. Rather, she first shows that Germany was split in two in 1945, and that the Communists (backed by the Soviet Union) in East Germany were, in fact, the more sincere in their “working off.” They had more memorials put up. They invited Jews to return after WWII. And they imprisoned former Nazi officials, whereas, in the West, those officials were often made part of the American-sponsored “democratic” government.

Neiman quotes from Hannah Arendt and Jean Amery and adds her own opinions and story to the examination. Her perspective of being Jewish in Germany is compelling. People tell her that their family hid a Jew in their house “during the war,” or that some of their best friends are Jews.

Where have we, in America, heard that before?

The second section of the book brings Neiman to the University of Mississippi and the Winter Institute, where she works with Susan Glisson and applies the same scholarly/journalistic approach to examining Confederate history.

She talks to the people who created and/or curate monuments to the Old South. Neiman starts with the Civil War, but makes it clear that, while the Nazis had 12 years in power, the violent distortions of institutionalized race-hatred in America have existed for 400 years.

Neiman looks most closely at events of the Civil Rights movement in the 1950s and 60s. She presents the story of Emmett Till in close detail, calling it the springboard for the struggle. She tells the story of murdered civil-rights workers Michael Schwerner, James Chaney, and Andrew Goodman because the man known to have killed them wasn’t tried and convicted until 40 years later.

These and other acts of systematized terror Neiman equates with the moral stain of the Holocaust upon all Germans. Knowing your people have done such things, knowing your families benefited from the terror your ancestors manifested against Jews, African Americans, or anyone, how do you choose to remember? How are Americans “working off” their shame?

The third section of the book, “Setting Things Straight,” outlines some actions which have been successful in “working off” past sins in Germany and the United States. She wishes one such action — the removal of Confederate statues erected decades after the Civil War to promote white supremacy and the myth of the Lost Cause — would happen more frequently.

Neiman also examines the idea of reparations, highlighting Ta-Nehisi Coates’ “The Case for Reparations.” She proposes that, at the very least, Congress begin to debate the issue in H.R. 40. She also says that Congress should be bolstering rights for African Americans, not taking them away, which is the current trend of the Republican party.

Neiman has a strong negative opinion of President Donald Trump and his loyalists. The reader can easily see how the Trump administration is rending the tender social connections she is documenting. Not only is the U.S. not currently “working off” its shame, but it’s doubling down on fear, anger, hatred, and ignorance.

So, take it from me, the guy who calls his father a racist and whose son calls him a racist: “Working off” is your responsibility. You have to educate yourself and participate in society’s attempts to rectify itself. You have to know how privilege has played out in your life and to acknowledge that others did not receive those benefits. And you have to give back.

But that’s me talking, not so much Neiman.

Learning from the Germans is an important book for showing us a path we can follow. The author says she loves living in Berlin today because the Germans have recently done much better “working off” than in the 80s and 90s. She knows that Trump represents a pendular swing from the Obama years and hopes that, perhaps, more progress will be made further down the road.

Y.S. Fing is a composition teacher, writer, and literary-community participant in the DC area.