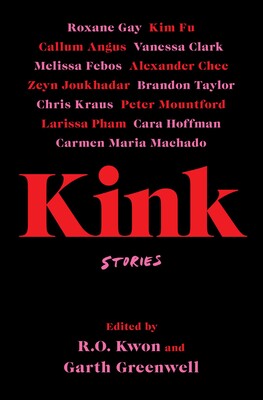 In attempting to capture complex emotions, however, Kink succeeds at times, such as in “The Cure,” where Melissa Febos writes, “She didn’t care. Her not caring was voluptuous, sensual. It was a most substantial absence. It filled her like a good meal. She had had enough.” Elsewhere, the narratives are weighed down by tropes, as in Larissa Pham’s “Trust,” where we get the ubiquitous empty-shell metaphor: “She feels delicate and hollowed out, like an empty seashell.”

Of course, writing about love and desire is not easy, and some of the stories do it in a straightforward, moving way. Here again is Febos:

“The first time he slept with a woman who asked him to hit her, it felt like a window had opened inside him. He’s not sure what happened, exactly — that she saw something in him and touched it, or if the thing in her was so powerful, it moved the thing in him. All he knows is how it felt — where there was blank space, a rupturing.”

In other tales, we see these supposedly “alternative” relationships normalized: “After some discussion, they decided they’d both benefit from professional guidance. It was like doing yoga, they figured. Hazardous, at first, to go through the poses without an instructor’s help,” writes R.O. Kwon in “Safeword.”

“He was tired. His right shoulder hurt. He didn’t want to hit Julie anymore — he wanted to get out of here. He wanted to untie her and take her home, soothe her and have sex with her, his wife, whom he loved. But he kept going. Finish the session, he told himself.”

“He told me he would put me on probation. If I consented, we were entering the second stage. The rules were: He’d decide when and how often we would see each other. He’d decide when and how often we’d talk on the phone. I would not know his address or phone number, but I was free to leave him as many voice mails as I wanted, providing that they made him hard. I found this very liberating. How many hours had I spent in ‘normal’ dating situations, pondering the etiquette and timing of the post-fuck call?”

One of the few outstanding pieces in the collection is Garth Greenwell’s “Gospodar” (translating to “master”), in which an American teacher has a tryst with a Bulgarian man in the latter’s home country, where the LGBTQ lifestyle is still hush-hush. Greenwell’s prose is evocative and precise:

“He lived on a middle floor of one of the huge Soviet-style apartment blocks that stand everywhere in Sofia like fortresses or keeps, ugly and imperious, though this is a false impression they give, they’re so poorly built as already to be crumbling away.”

Unfortunately, Kink ultimately fails in its power play for the reader’s excitement; I had to force myself to get through it, and not in a good way. While its subject matter still sorely lacks literary representation, this anthology doesn’t contribute much to the conversation.

The Mortifications: A Novel

The pull of family and Cuba loom large in this fascinating story reminiscent of Márquez.