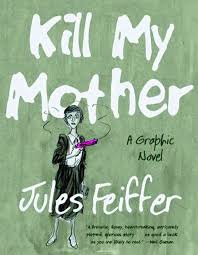 It’s interesting, the use of the imperative in the title of Jules Feiffer’s frenetic and dynamite new graphic novel, Kill My Mother. His command suggests a hit (which there is) and matricide (that, too), but neither come about in the way the title might suggest. That tension between expectations and delivery is what keeps us on the edge of our seat in this cinematic, thoughtful book.

Feiffer opens the story with a dance. Swirling and raging around the room, teenaged Annie rants against her mother while yanking her boyfriend, Artie, to and fro. Annie’s anger is palpable — especially when rendered in Feiffer’s sketchy lines and loose shading — and the rest of the book seethes with her fury. We soon meet her reviled mother, Elsie, a widow too smart to waste her talents on the drunk detective she works with (though she seems to have no other choice in 1933 Bay City).

Soon that detective has taken a case from a mysterious tall woman looking for her doppelganger, and the search takes Elsie and her drunken boss from seedy hotels to the boxing ring to a gridlocked car chase.

Meanwhile, the rebellious Annie and her boyfriend are fishing for trouble. They embark on a shoplifting spree in which Annie goads Artie into pocketing stolen merchandise, only to abandon him when, after a footrace, a security guard nabs him. But another mysterious tall woman comes to their violent rescue, thereby earning Annie’s boundless gratitude.

A third tall (and, yes, mysterious) woman enters the story, and the stage is set for a Shakespearean drama of secret identities, madness, and revenge. Feiffer keeps us hopping along, moving from a noir 1933 first section to a classic Hollywood-style 1943. The story culminates in a fantastic, heart-pounding climax that provides just the right mix of resolution, mystery, and tragedy.

And, don’t forget, the killing of a mother.

The panels are creatively arranged yet always easy to follow (excepting a few dialogue tags), and the art is tremendously expressive. Too expressive, sometimes, lending a hysterical air to Annie and Elsie’s emotional tug-of-war, with eyes bulged to the limit and mouths open in screams that makes Edvard Munch’s look self-possessed.

The nearly manic emotional swings experienced by both women, particularly Annie, are the book’s weak point, and Annie’s final transformation is so extreme as to be a little difficult to believe. But by then, Feiffer has securely caught the reader in the beguiling web of his characters’ stories, and a little indulgence for a master of his craft seems no great sacrifice.

For Feiffer surely is a master — he has a Pulitzer Prize under his belt, to say nothing of his role as a pioneer of the modern graphic novel — and he creates complex mood and tension in just a few nearly monochrome panels.

His ingenuity with the placement of those panels (particularly during the climax, where he manages to display multiple storylines simultaneously) makes the book a pleasure to read. And to quickly revisit, something readers are likely to want to do to search out the hidden clues sprinkled across the story’s various mysteries. (I should note that this review is of the hardcover edition; the e-book may be different.)

As for that demanding title: Feiffer has admitted elsewhere that his mother has percolated into much of his work, and it doesn’t seem too far a stretch to suggest he is interested in exploring the relationships between mothers and their children. This book dips its toe into that exploration, although it is mostly concerned with examining how children manage the after-effects of maternal drama.

It’s possible that Feiffer is merely doffing his hat to one of the great doyennes of noir, Patricia Highsmith (one of his characters is named Patricia, though perhaps that’s a coincidence), who had her own preoccupation with mothers — and their deaths. No matter what his motivation, the result is clear: an entertaining, atmospheric book that does not command so much as ask the eternal question of just who, exactly, we are.

Carrie Callaghan’s short fiction has appeared in Silk Road, the MacGuffin, Weave Magazine, and elsewhere. She is a member of the editorial board of the Washington Independent Review of Books. Twitter: @carriecallaghan

The Devil and Webster: A Novel

A naive college president struggles to contain a protest by media-savvy students.