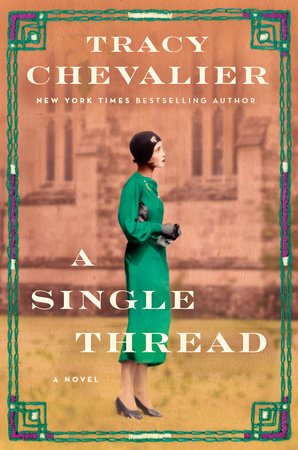 Tracy Chevalier knows her history and she knows how to incorporate it flawlessly into an engaging narrative. She’s done it before, most notably in the popular Girl with a Pearl Earring, set in 17th-century Delft, choosing one of Vermeer’s best-known paintings and creating for it a fictional muse.

In the leisurely paced A Single Thread, she develops the story of 38-year-old Violet Speedwell alongside the known facts of real-life Louisa Pesel, founder of the Winchester Cathedral Broderers Group from the early 20th century. She also involves Violet with a group of bell-ringers, a pastime probably most familiar to readers of Dorothy L. Sayers’ electrifying mystery, The Nine Tailors.

Violet’s and Louisa’s lives intersect on May 19, 1932, when Violet, a typist for Southern Counties Insurance, is on her way to buy a typewriter ribbon. Her dull job requires her to complete application forms to “insure someone’s life, house, automobile, boat…a meaningless, repetitive act that becomes a soothing meditation, lulling her into a state where she did not think; she simply was.”

Before making her purchase, she stops into Winchester Cathedral (more specifically, Fisherman’s Chapel) to honor her deceased fisherman father. She unknowingly interrupts a Presentation of Embroideries service by the guild that is stitching new kneelers for chairs near the altar. It is the start of an “ambitious project to bring color and comfort to those who come to services in the choir and presbytery.”

Unceremoniously shushed by one of the ushers, the undaunted Violet is not to be rebuffed. She admires the work of the women and decides she would like to contribute. That means an arduous apprenticeship during which she learns from Louisa the varieties of fabrics, needles, and stitches.

It has been a torturous personal journey for Violet to leave her home in Southampton in order to gain a sense of independence in Winchester, 12 miles away. Back home, she was constantly under the control of her obstinate mother, an inveterate complainer.

Her mother’s recalcitrant temperament is not without cause. She lost her eldest son to the Great War. Then her husband died. A younger son, Tom, escapes their intractable mother by marrying and having his own children. It is Tom who encourages Violet to forge a life that might bring her freedom, happiness, and love.

Violet has already been labeled one of many “surplus women” left unmarried (some widowed) as a result of the war. Violet loses her fiancé on August 1, 1917, in the brutal Battle of Passchendaele, where thousands of other women’s husbands or potential husbands were killed, too.

Fifteen years later, still grieving the deaths of her brother, father, and fiancé, Violet is determined to build a new life for herself. That includes being content with brief encounters with “sherry men,” meeting them in hotel bars, often ending up in alleys, cars, or parks, but never feeling emotionally fulfilled.

She hopes that moving away from Southampton will be a fix for loneliness. She makes friends with office mates O and Mo (Olive and Maureen), but both are a little too busy pursuing their own marital possibilities.

On the day Violet walks into the cathedral, she begins a close relationship with Gilda Hill, an embroiderer who is a free-thinking, self-reliant spirit with a distinctive personality. Gilda advises her on how to deal with the feisty usher and the martinet ways of Louisa. Gilda herself is dealing with a relationship considered outside social norms.

During a lunch break, Gilda introduces Violet to the man who will play a significant role in her future, 60-year-old Arthur Knight. He is a bell-ringer at Winchester and in his village of Nether Wallop, where he lives with his ailing wife, who is distraught over the death of their son in the war.

Violet and Arthur find solace in their common losses. They discover that their avocations — embroidery and bellringing — share a similar sense of order and a commitment to patterns, patience, and persistence. After Violet expresses an interest in campanology, Arthur agrees to mentor her in what is customarily a male activity.

They begin a platonic relationship, meeting for tea or coffee, walking and hiking in the countryside. Soon enough, the slow-building passion between them threatens to provoke a bittersweet romance frowned upon by 1930s society. Chevalier subtly weaves their captivating story toward a satisfying conclusion that makes A Single Thread into a singular sensation.

Robert Allen Papinchak, a former university English professor, has reviewed a range of fiction in newspapers, magazines, journals, and online, including the New York Times Book Review, the Washington Post Book World, the Chicago Tribune, the Los Angeles Review of Books, the Seattle Times, USA Today, People, the Writer, Publishers Weekly, Kirkus Reviews, the National Book Review, the New York Journal of Books, World Literature Today, the Millions, the Pittsburgh Post-Gazette, the Strand Magazine, Mystery Scene Magazine, Suspense, and others. He has been a judge for Publishers Weekly's BookLife Creative Writing Contest, the Nelson Algren Literary Prize for the short story, and the John Leonard Prize for Best Book of 2018 for the National Book Critics Circle. His own fiction has been nominated for the Pushcart Prize and received a STORY award. He is the author of Sherwood Anderson: A Study of the Short Fiction.