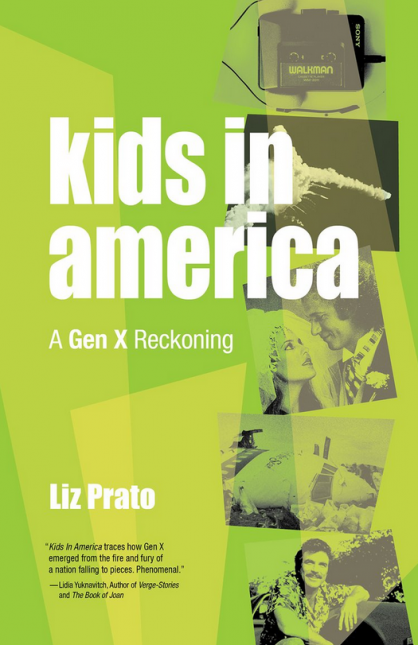 Any book that attempts to define a generation or even to highlight certain aspects of its experience will be immediately challenged by members of that generation, those who lived the same experiences — but lived them differently.

Because each Gen X experience is intensely personal, the project of finding common ground is a difficult and thankless one — especially given Gen-Xers’ penchant for ironic detachment, for denying club membership. This book is not going to be about me, a Gen-Xer might think while opening it — and be proven correct, naturally. What could be more Gen X than resisting someone else’s definition of who you are?

This is all to say that Liz Prato has a tall order to fill in titling her book Kids in America: A Gen X Reckoning. A member of Gen X herself, Prato looks back over her formative years in the 13 essays that make up this collection. While a handful offer interesting insights, the book as a whole has several major shortcomings.

The first becomes evident in the opening essay, “Gen X Prep,” in its very first paragraph:

“We were privileged. We were mostly white, although a few of us were Black or Hispanic or Asian or Native American. We were old money and new money and not a lot of money, but the majority of us were upper-middle class.”

What becomes clear here is that Prato is describing a very specific Gen X experience; as a 1985 graduate of Kent Denver Country Day (KDCD), she is a member of “Gen X Prep.” Indeed, the title of the first essay is a better descriptor of Prato’s project than is the book’s title, as a great deal of what follows is narrowly focused on the Gen X private-school experience.

A major component of Prato’s project, at least in the first third of the book, is to address the blind spots in her prep-school worldview. She interrogates, for example, what it must have been like to be a Black student at KDCD by telling the story of classmate Alicia Farber, one of five Black students who graduated from the school in 1984. The following year, when Prato graduated, there was just one Black student in a class of 104. Prato writes of the ways in which Alicia was “other” because “she was Black, because she was on scholarship, and because she lived in the inner city.”

Reconstructing Alicia’s story from interviews conducted with her years later, Prato finally acknowledges, “I was aware of how often Black people are asked to serve as educators for their white friends, and profusely thanked Alicia for taking the time and energy to talk with me.”

This acknowledgment does little to temper the motivating impulse that guides a number of the essays; Prato seems to be coopting other people’s stories out of mild guilt over her ignorance of their experiences. In a similar manner, she writes of her friend Mina Stays Light, the only Native American student at the school when she started in seventh grade.

Prato writes, “It never should have been up to Mina, an adolescent, to be the vector of cultural education for my entire school.” And yet she continues to serve this purpose in Prato’s essay, carrying the stories of Native people and standing as a symbol for Prato’s concern for and acknowledgment of Indigenous experiences.

The middle of the book contains several essays that offer a broader scope, dealing with, among other things, popular culture from the last three decades of the 20th century. In “Scenes from My Youth,” Prato offers a compilation of vignettes from “Rocky,” “General Hospital,” “Meatballs,” “Sixteen Candles,” and “St. Elmo’s Fire.” In each case, the scene is a variation of the same basic plot: Boy comes on to girl, girl resists, boy persists, girl falls for boy.

Prato describes these scenes with an almost clinical detachment, noting, for instance, that in the 1979 film “Meatballs,” the character Roxanne, in trying to resist physical contact with Tipper, says “‘no’ or ‘stop’ nine times in thirty-five seconds.” In the final section of the essay, Prato explores the real-world implications of such onscreen portrayals:

“This is the scene sometime — anytime — in the 1980s, when a boy and a girl, a young man and a young woman who don’t know each other are alone together. He makes a move she doesn’t want him to make, and she says no. She says stop. She says I’m not comfortable. She says let me go. What does he hear when she says those words? What does he picture? Does he picture a triumphant underdog, a soap opera hero, an irreverent jokester, the perfect guy, the sexy bad boy who saves the girl in the end?...

“This is the scene the next day — and for years afterwards — when the girl, the young woman, the grown woman wonders ‘What happened that night?’ He was a friend — wasn’t he? He was a good guy, right? I mean, everyone likes him. Maybe there’s something wrong with me. Maybe I gave him mixed signals. Maybe I didn’t say NO strong enough, often enough, loud enough. Maybe it was my fault.”

Another piece, aptly titled “That Long, Weird Essay That’s Entirely About Beverly Hills, 90210,” is a somewhat tedious slog through multiple plotlines of the long-running program that eventually comes to obvious conclusions about the ways in which the show failed to deal adequately with a host of issues (depictions of non-white characters, the double standard applied to sexually active young men and women, and so on). Readers who don’t care about the show will find the essay a bore; those who do are likely to find the author’s insights to be self-evident.

The most successful essays in the collection come toward the end, when Prato tells more personal stories, displaying a refreshing vulnerability and depth. Her essays on her father and her brother — both of whom she lost in 2011 — are particularly strong.

In “Blood Brothers,” she weaves together her own story with her friend Rachel’s. Both lost their brothers — Rachel’s brother Elias died at 25 in a shootout with police, while Prato’s brother Steve died at 45 after a long history of debilitating medical and psychological issues — and Prato is able to braid the two narratives into an insightful reflection on grief and the ways in which families disintegrate. Another affecting piece is “Magnum Force,” in which Prato writes again about her brother and also her elderly father, exploring the end of their lives.

Overall, Kids in America is a mixed bag. As a collection of personal essays, it has its strengths, but its promised “reckoning” seems to be mostly a mildly guilt-ridden backward glance, applying a contemporary liberal lens to the American cultural landscape of three or four decades ago and decrying it as horrible for its racism, sexism, misogyny, and general lack of woke-ness. Perhaps there is merit in such a project, but Prato’s execution tends to strike the same note again and again with little variation.

A Heart That Works