Just Us: An American Conversation

Its intermittent lyricism aside, this commentary on race falls short. 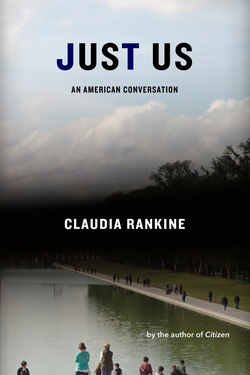 If all I can do is speak, it is
for you [Martinique] I shall speak,
and again I would say:

My mouth shall be the mouth of those calamities that have no
mouth, my voice the freedom of those who break down in the
solitary confinement of despair.

Claudia Rankine began her first book with Aimé Césaire’s “To Go Away.” It is a lonely poem, capturing the moment of a man’s departure from colony to metropole for his formal education. But it is resolute in its commitment to uplift the poet’s home community. It reconciles its underlying sorrow with its awareness of the importance of the poet’s platform: speaking for the voiceless and despairing.

Rankine has risen to Césaire’s standard throughout her career, holding up the plights of celebrities like Serena Williams and Zinedine Zidane (see Citizen) and the anguish of everyday characters that populate her plays and poems. In Just Us: An American Conversation, Rankine is still this spokesperson. In this collection of 21 vignettes and dozens of mixed-genre images and excerpts, she reveals what oppresses her this time.

The Yale professor, MacArthur fellow, and celebrated artist lays out exactly what it is like to be Black/female/famous/acclaimed/othered in elite white spaces. She is precise in her naming of the things that go on there: Black folks are “historied out” of various contexts; we are subject to “white expectations.” Her insights are many.

It is hard to empathize, though. Black life at the top of one’s field seems, simply, overdetermined by idiots. Why should readers care?

Rankine exposes their pretenses. And the book is fun in that way; she will make people squirm. But it reads as a compendium of complaints. What’s the calamity, in Césaire’s terms? For whom or to whom is Rankine speaking? One chapter suggests an answer.

In “Ethical Loneliness,” Rankine tells on a white friend who attended a Black-authored play with her but refused to budge when a character called for white people in the audience to get up on stage. Rankine’s friend stayed put, which made Rankine feel “tense,” “resentful,” and “betrayed.” Rankine found it “unbearable.” But the friend doubled down and later explained:

“I sometimes shrink from scenes where I’m asked, personally or generally, to feel bad as a white person — where whatever else is being asked, I’m being asked to feel shame, guilt, to do penance, to stand corrected, to sit down chastised…I feel like unholy transactions are in the offing, like white moral masochism is getting a thrill.”

It is there, more than 200 pages into Just Us, that I become (ironically) clear: The book seems to be for people in need of that feeling of guilt.

The book’s title makes it seem like it might be about grittier struggles, though. Just Us gets its name from a famous Pryor/Mooney quote about the prison industrial complex: “When you go down to the courthouse you look for justice, but you find just us.” But Rankine’s book feels far removed from survival-level struggle and grotesque Americanisms like mass incarceration.

Thus, the nod to Pryor’s work seems unfair. Just Us is not a book about Black women shot down by the police in their homes or incarcerated for minor crimes. It’s about Black women who enter the country club through the front door. Rankine’s 360-page exposé of microaggression feels far from whatever strengthens its author. But it may be purposefully so.

Rankine explores her situation through frames constructed by other famous Black people. She interprets the pressures on her marriage through the lens of Beyonce’s “Lemonade.” She gives language to her context via quotes from Michelle Obama’s Becoming. She even quotes Chris Rock as backup on the problem of Blackness in high places: “There ain’t a White man in this room that would change places with me…and I’m rich.”

Rankine replicates the experience of making a home in a place that marginalizes by race. The word “white” in this book overwhelms in much the same way that Europeans overwhelmed both hemispheres and Eurocentrism overwhelms the academy. The phrase “White people” appears everywhere, threatening to paint itself right over our existence. The 20-line poem “Sound and Fury,” for example, uses the word “white” 23 times. It begins:

The gloom is
The off-white of white. Because white can’t know

At the bone of bone-white breathes the fear of being,
The frustration of seeming unequal to white.

Despite the irritating redundancy, Rankine is in full control. Repetition is the literary device, and the form of the poem follows its function. It frustrates. It even depresses. But that is because that place in society — "You Are Not Quite One of Us!” — is a dysthymic existence. It’s subtly unfree and, as Rankine reminds readers, always just one step from “a cross burning on the lawn,” anyway. In this way, Just Us soars.

Just Us is also lyrically exquisite in places, and it will be a satisfying read for people interested in one woman’s inner struggle with empowered speech. For, throughout the book, Rankine reveals how difficult it is to say what one means on the spot where one is a minority. This metacommentary makes Just Us a book on vocal agency.

However, as a book on race — as it will be hailed — it does fall short. Just Us doesn’t need to be about the struggle of super-oppressed people. But even as an exploration of the special type of discrimination faced in high places, it could be far more impactful. It cries out for the strengths of Rankine’s root tradition.

It made me want to wrap Rankine in a blanket of Maryse Condé and Jean Binta Breeze and remind her: “Dem bukra don’ have nothing on you. Yu an empress an’ dem fool-fool.” It engages something — payback? — that seems beneath the author’s calling and the strength of her previous work. As such, Just Us feels detached both from this important moment in history and from the traditions of strength and creativity that will move “us” through it intact.

Sarah Trembath is an editor, writer, performance artist, and educator. Her work has appeared in the Santa Fe Writer’s Project Quarterly, the Rumpus, Everyday Feminism, Sally Hemings Dream zine, Azure literary journal, DCist, and the Grace in Darkness anthology of DC women writers. Her first book, a collection of poetry and prose on coloniality, race, and class called This Past Was Waiting for Me, came out in 2018. Her collection of poems on temptation and loss, It Was the Scarlet that Did It, came out last year. She is a graduate of Temple University in Philadelphia and Howard University in DC and is on faculty in the Writing Studies Program at American University.