Jumping Over Shadows: A Memoir

An exquisitely written conversion story which expounds upon personal and collective identity. 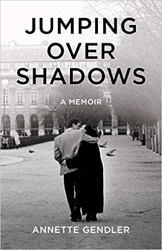 On the website of Israeli-born New York artist Hanan Harchol, readers learn that “Harchol uses the family as a microcosm for the larger human condition, exploring the universal through the personal.” Annette Gendler’s new memoir, Jumping Over Shadows, does much the same thing, though the particularities of Gendler’s experience are deeply underscored and the universals are more subtly evoked.

Annette was born in New Jersey to an American mother and a father from Czechoslovakia. The family, including Annette and her siblings, moved to Munich, where she was educated. They practiced a sort of Catholicism-Lite. “In fact,” Annette writes, “to say I was raised Catholic is almost a misnomer.”

In her early twenties, she met Harry — a friend of a friend — who belonged to a traditional Jewish family. Their romance was guarded; each knew that a marriage between them was likely to shake their families to the core.

As Annette discovered, such a marriage had rocked the family when her German great-aunt had married a Czechoslovakian Jew in the early 1920s. Later, the Nazi takeover caused this mixed marriage to pose enormous problems for the extended family. Such was the baggage carried by these 1985 sweethearts.

Memoirist Annette alternates between scenes that trace her developing relationship with Harry and scenes that recapture the dilemmas brought about by her great-aunt Resi’s marriage. She makes the people and times of her family’s past ordeal, the taint of the family’s problems, come alive. She paints a world she never knew but learned to understand.

The question is, of course, what will Annette and Harry do and how will they negotiate the obvious problems — and the not-so-obvious ones? What will each give or give up? A major portion of this story springs from Annette’s carefully considered decision to convert to Judaism. In part, this is an intellectual process, but it is much more than that. The author recalls the steps that she took, the growth in her learning, and how her exploration of Judaism and of possibly becoming Jewish changed her.

Learning the tenets of the faith and some history is one thing; learning recipes for gefilte fish and other Jewish foods is another. Learning Hebrew is yet another. Discovering how to lead a traditional Jewish life and learning to love Israel are two more necessary strands. Annette’s education becomes an education for the general reader and a new kind of blueprint for the less observant or less committed Jewish reader.

How this process is worked through, especially the part that brings Annette and Harry to the rabbi in Switzerland who will convert Annette, is fascinating. So are the scenes of the couple’s civil American marriage and those of Annette in the Jewish kitchen, pleasantly accepting advice. Their Jewish marriage occurs a bit later, back in Switzerland.

Annette learns to observe the power and subtlety of anti-Semitism; then, she learns to feel it.

For the Gendler couple, starting their life together means moving to America. The distance will help them avoid complications that, in Munich, could be destructive. It also will provide opportunities, especially for Harry, who needs to step out of his father’s shadow. All along the way, we witness that ebbs and flows of an identity reconfiguration.

This book is filled with strikingly effective descriptions of the many places Annette lives in or visits. A trip to Israel, several trips to Holocaust memorials (often with Harry), visits to a teacher, and especially visits to newly renovated synagogues. The latter prompts her to realize that these “monuments of post-war Germany’s welcoming of the Jews” were oddly, perhaps tragically fitting: “gleaming but empty synagogues.”

Annette, a photographer among other things, has an amazing eye for detail. Over and over, she fashions just the right images to anchor readers’ attention. Fluent in several languages, she is attuned to body language, as well. She remembers gestures, glances, the speed at which someone turns around. It all counts. It all adds up.

Yossi Klein Halevi said of this book: “She reminds us why converts to Judaism are among the most precious gifts to the Jewish people.” Amen to that. Moreover, Annette Gendler — with her skill, intelligence, and passion — is a precious gift to all reading, thinking, feeling people. And especially to the apprentice writers whose ambition she can nourish and shape.

Dancing Through It: My Journey in the Ballet

A professional ballerina comes of age and discovers her true worth.