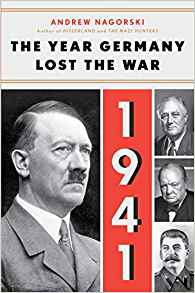 What a difference a year makes. Or so argues Andrew Nagorski in his newest book, 1941. That, in his view, was the year Germany lost World War II. Others might suggest 1944, when the Allied invasion of Normandy forced Hitler to fight on two fronts, or, ultimately, 1945, the year the Axis powers surrendered.

But Nagorski, a former longtime foreign correspondent for Newsweek and the bestselling author of six previous books, makes a compelling case that 1941 was a critical turning point leading to the eventual German defeat.

Nagorski’s view is informed not only by an intimate knowledge of history — he drew, in part, on his previous books to research this one — but also by his own family’s story. His grandfather was evacuated from France in 1940 and was part of the free Polish government in exile in London. His father was in the Polish army and escaped to Scotland during the German occupation.

Hitler and Stalin loom over it all, with President Franklin D. Roosevelt and Prime Minister Winston Churchill important but lesser figures in Nagorski’s gripping drama. Hitler’s prison work, Mein Kampf, may be best remembered for its extreme anti-Semitism, blaming Germany’s defeat in World War I and every other imaginative ill on the Jews and foreshadowing the Holocaust. But Nagorski recalls a less noted passage in which Hitler describes Stalin’s Soviet Russia as the biggest threat and vows one day to conquer it.

Hitler viewed Russians as Untermenschen, a half-Asiatic people second only to the Jews as a sub-human species. Hitler hoped, among other illusions he harbored, for an alliance with Britain against the “Jewish-Bolshevik” menace. Stalin, for his part, had contempt for Hitler. Both men were murderous dictators, opposite sides of the same coin.

Still, they signed a non-aggression pact in 1939. That allowed Stalin to absorb the Baltic countries, invade Finland, and occupy Poland. Stalin naively thought the alliance would hold; he dismissed his own intelligence that Germany was poised to open an eastern front, attacking Poland and then invading Soviet-controlled territories and even Russia itself.

Operation Barbarossa, which Germany launched in June 1941, drastically changed the equation on the fields of battle and diplomacy.

Then, Hitler, dismissing his advisors’ recommendations, opted to seize Kiev rather than first attack Moscow. As the Nazi forces approached, Stalin came close to abandoning the capital city but changed his mind at the last minute. Meanwhile, the Russian winter, which Hitler had hoped to avoid, along with fierce resistance from the Red Army, stopped the German advance. Due to Hitler’s miscalculation, his troops were inadequately provisioned and clothed for the harsh weather.

Nagorski poses another tactical and ironic error on Hitler’s part — his decision to use railroad cars to carry Jews to death camps rather than transporting fresh troops and supplies to the front. So, thanks to Hitler’s extreme hatred of Jews, the Holocaust proceeded, and Hitler lost the war.

Further motivating the Russian resistance was Hitler’s credo, that “terrorism is a salutary thing,” indicating how he expected his troops to treat Russian prisoners-of-war and civilians in the areas they conquered. The Commissar Order commanded German troops to execute Red Army political officers, including those trying to surrender. Similarly, Stalin’s Order 270 commanded that Soviet soldiers who refused to fight or sought to retreat be executed.

Not mentioned — but the subject of another recent book, Blood, Oil and the Axis, by John Broich — was Hitler’s decision to battle for control of North Africa rather than the oil-rich Levant, which left the Reich without the fuel it desperately needed.

Through it all, Nagorski reports, Hitler rejected recommendations that might have improved Germany’s chances. He alone, he ranted, knew the answers, and he took no responsibility for his mistakes.

While Hitler and Stalin were waging strategic wars, Churchill was desperately trying to nudge FDR closer to an outright wartime alliance. It would take the Japanese attack on Pearl Harbor on Dec. 7, 1941, to force FDR’s hand. Meanwhile, Japan’s decision to attack the United States rather than the Soviet Union’s Far East freed up Russia to send troops stationed there to the west to fight the Nazis. Such geopolitical decisions or whims, Nagorski writes, made 1941 the pivotal year.

These unforeseen turns of events in 1941 drive the book’s narrative. It slows only when Nagorski gives us too much detail about the comings and goings of diplomats — American, British, and Russian. Too many characters float in and out of these scenes. Here, the story tends to get bogged down, and this reader wished more for a summary.

One important exception is the role of U.S. Ambassador Joseph Davies, whose sympathetic “Mission to Moscow” became a bestselling book and then a propagandistic Hollywood film. FDR appeared to welcome his roseate view of Russia under Stalin and backed the Soviets with military supplies and vocal support once America entered the war. The sulfurous dictator transformed into likable “Uncle Joe.”

The pivotal year this book highlights, Nagorski suggests, also set the stage for the postwar division of Europe. Though FDR was faulted for acceding at the 1945 Yalta Conference to Russian demands for hegemony over Eastern Europe, Nagorski argues there was logic to the Soviets holding onto lands they had seized back from Germany and already occupied.

Thus, 1941 was not only the year that Germany lost the war but also, given events that flowed from Hitler’s failed Operation Barbarossa, the year that the Soviet Union arguably won the peace.

Eugene L. Meyer, a former longtime Washington Post reporter and editor, is the author, most recently, of Five for Freedom: The African American Soldiers in John Brown’s Army, winner of the 2019 Outstanding Biography/History Book award from the American Society of Journalists and Authors.