John Marshall: The Man Who Made the Supreme Court

The country's most influential chief justice finally gets his due. 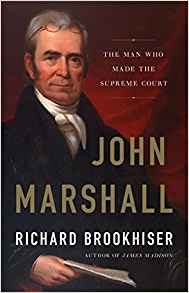 Always on the short list of our most important Founding Fathers, John Marshall’s place near the top is secure, yet he’s never received as much historical coverage as his peers. Why?

In his new book, John Marshall: The Man Who Made the Supreme Court, Richard Brookhiser attributes the shortage of attention to his subject’s meager lifetime paper trail, and to the public’s common (but erroneous) perception that grasping the particulars of our nation’s most influential chief justice requires a measure of legal education.

Two reasons explain Brookhiser’s being the right person to raise Chief Justice Marshall’s profile on history’s radar screen. First, he takes on the task with a sizable head start over other historians because of his thorough understanding of Marshall’s peers. The author has previously written acclaimed biographies of Washington, Hamilton, the Adamses, Morris (the Constitution’s principal draftsman), and Madison.

Second, Brookhiser is not a lawyer, and his political journalism skills empower him to tell the story of his subject’s landmark career on the Supreme Court absent legalese, writing up the facts and holdings in Marshall’s most important cases as if they were short stories — which makes for an easy read out of what could have been technical tedium.

In seeing the forest amidst the trees, Brookhiser develops as a major theme the fact that above all those who crossed Marshall’s path over the course of his 79-year life, the man who had the biggest impact was the one and only George Washington. The two men first connected when Lieutenant Marshall served under General Washington at Valley Forge and elsewhere during the American Revolution.

After the war, Washington continued to lead his disciple as Marshall’s political mentor. With Washington presiding over the Constitutional Convention in 1787 and becoming a staunch proponent of its final product, Marshall became ready, willing, and able to serve as the document’s champion at the Virginia Ratifying Convention.

When Washington chose to support the Federalist Party’s position during his presidency, Marshall again followed his leader and ended up having a longer-lasting political impact than any other Federalist, since the party died during the War of 1812, but Marshall led the Supreme Court until his death in 1835.

As a final example of the two men’s iron-clad connection, after Washington’s death, the newly appointed Supreme Court chief justice took on the challenge of writing his hero’s biography, and it became a tribute that filled three volumes. Brookhiser’s three prior books on Washington surely paved the way for his complete grasp of the nation-changing relationship between “the Father of Our Country” and “the Man Who Made the Supreme Court.”

Beyond emphasizing Washington’s impact on Marshall, a major part of Brookhiser’s analysis is to zero in on his subject’s two main virtues that became the keys to his success as chief justice. First, Marshall had a personality filled with bonhomie. He liked being with people, and they liked being with him. He relished frequent, fun-filled evenings that featured good food, Madeira wine, high spirits, and engaging conversation.

For most of his 34 years leading the Supreme Court, Marshall insisted that during its sessions in Washington, DC, all justices stay in the same boardinghouse and eat their meals together. This created a brotherly camaraderie among the court’s members as they conversed about pending cases over supper, which inspired a steady stream of unanimous opinions and only rare dissents and concurrences.

Through the force of Marshall’s consensus-building personality, this high level of judicial harmony remained even after justices nominated by Republican presidents outnumbered those chosen by Washington and John Adams.

Marshall’s other dominant trait that caused him to achieve such exalted status was his steadfast courage. He feared no one. When he became chief justice in 1801, his three predecessors had presided over only a few insignificant cases since the court’s founding in 1789. So, when Marshall arrived at the helm, the president and Congress were strong, but the federal courts were not.

Then it all changed.

More than anyone else, Marshall brought the three branches of government into equilibrium and, to fulfill its checks and balances, established that the judiciary would have the final say in determining whether executive and legislative actions complied with the Constitution.

As the new nation governed by a new “Supreme Law of the Land” tried to figure out who could do what, Marshall became the indomitable sheriff in town, ever present to gun down state laws, acts of Congress, and presidential overreach whenever he and his black-robed brothers thought the Constitution required it. One shudders to think whether the United States would have survived as a nation governed by the rule of law without Marshall’s leading the Supreme Court during the country’s crucial formative period.

Brookhiser properly concludes his biography by asking the right questions about where the nation is going now in the context of knowing where it’s been. Will Marshall’s commitment to the Constitution’s words and history be maintained by future generations of Supreme Court justices? Will the court preserve its preeminent position in evaluating the constitutionality of increasingly rapid-fire actions taken by the person currently in the Oval Office?

If the answer to these questions is “No,” then the country will surely join with Richard Brookhiser in hoping that someone with the talents and moral compass of Chief Justice John Marshall will arrive on the scene in time to right the ship of state.

Talmage Boston is an historian and lawyer in Dallas, Texas, whose most recent book is Cross-Examining History: A Lawyer Gets Answers From the Experts About Our Presidents (Bright Sky Press, 2016).