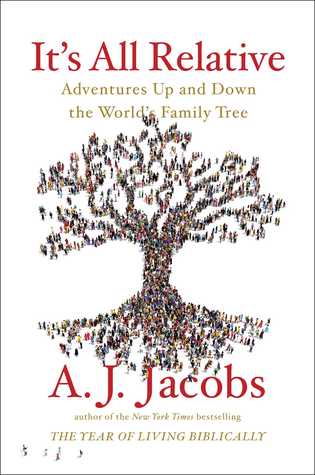 Let’s establish something from the outset: While some of us may claim familial strains of racial purity, we are a nation of mutts. Actually, we are a world of mutts, bickering our way into skirmishes and conflagrations based on our collective differences.

As A.J. Jacobs notes, the pity about this is that we’re all related to each other. Every single one of us, from the gentrified lofts of Brooklyn to the favelas of Rio, is a cousin. Jacobs, a gifted humorist, editor-at-large for Esquire, and author of It’s All Relative: Adventures Up and Down the World’s Family Tree, builds a literary scaffolding around this premise to brilliant effect.

And in light of the end-of-days pronouncements and racial bumblings by White House vultures circling the social experiment known as American democracy, it turns out Jacobs is also a keen observer of ethnicity. His insights, leavened by flat-out funny prose, couldn’t have come at a better time. The planet needs this book.

Jacobs isn’t one of those nonfiction writers who’s content to do exhaustive reporting on a subject and build his book. Instead, he prefers the experiential and dives into the world he’s exploring to become a disciple.

For example, in Drop Dead Healthy: One Man’s Humble Quest for Bodily Perfect, he adhered to the panaceas of the health craze. With It’s All Relative, he takes the gonzo path yet again, attempting to create and host the so-called Global Family Reunion with thousands of attendees. But for the most part, he breaks away from the navel-gazing mode of his past books to form a treatise about identity for the 21st century.

The genealogy craze we’re currently experiencing is where Jacobs begins. For the uninitiated, he provides an overview of businesses like Ancestry.com — which focuses on building your own family tree — to more collaborative sites like Geni.com, WikiTree.com, and FamilySearch.com.

Jacobs gets the lowdown from the Springsteen of the genealogy community, a Californian named Randy Schoenberg, who promptly tells him we’re living in the most exciting period of genealogical history.

“Which may sound a little like saying we’re in the sexiest era of professional bowling,” Jacobs quips. (Yes, perspective is important here.) Still, it’s fascinating stuff. To wit: The World Family Tree, connected by all of these sites, shows that, within a decade, the tree will connect all 7 billion humans on earth.

We learn that cousins are everywhere — and everyone. Jacobs spends a day with Geni.com searching for famous people he might be related to, and he soon learns he’s linked to Abraham Lincoln (just 17 cousins removed via marriage); Jackson Pollock (14 cousins removed); actress Rachel Weisz (a cousin, 12 times removed, by blood); and even Barack Obama (Jacobs proudly tells dinner guests, “He’s my fifth-great aunt’s husband’s brother’s wife’s seventh-great nephew”).

“How far removed from you is your furthest cousin on earth?” Jacobs writes. “A 2007 analysis by an MIT computer scientist gave a surprisingly small estimate: seventieth cousin. Meaning any two humans — a New York hedge-fund manager and Papua New Guinea yam farmer, for instance — are at most seventieth cousins. They share a seventieth-great grandfather who lived a mere five-thousand years ago.”

(So, basically, Kevin Bacon might as well be your brother.)

Of course, super servers and mammoth databases help break down all of those family trees, especially as more people decide to provide their family data. But the real killer app is our own DNA. Indeed, 23andMe.com and other DNA arbiters rest their entire business models on a dab of your saliva, which you mail to these companies for analysis.

A few weeks later, you learn your ethnic heritage, such as 60 percent Southern European, 20 percent sub-Sahara African, 10 percent Asian, and 10 percent Native American. You also receive a list of dozens or even hundreds of cousins, who, in turn, are also brimming with mongrelized DNA.

Because Jacobs is an adept storyteller, readers also ride shotgun with him as he heads down giddy rabbit holes in a quest to show our obsessions with identity. One journey includes a trip to the Annual Lilly Family Reunion in West Virginia, which holds the Guinness World Record for number of guests at 2,585. We also happily go with Jacobs as he learns how the Hatfields and McCoys, the famously feuding families, smooth out their differences these days with, yes, a good old-fashioned, back-slapping reunion.

And as nontraditional families become the norm — gay and transsexual parents, and even diblings, which are single sperm-donor fathers with multiple mothers — it only makes sense that Jacobs opens the door to polyamorous relationships and poly families. These are a group of, say, four adults who share partners and co-parent two, three, or more kids all living under one roof.

These are wild side trips, to be sure, but, like all great journeys on back roads, they shed light on a piece of humanity that normalizes the unknown. “I’m hopeful that embracing our genetic jambalaya will erode tribalism for all of us,” Jacobs writes. That’s a monumental hope these days, but he has at least offered a wonderfully smart and entertaining volley for how a world of mutts can get along.

Michael McCarthy, an editor-in-chief at Modern Luxury Media, has his mongrel roots in County Cork, Ireland, and roughly 48 pubs worldwide.