Jesus Before the Gospels: How the Earliest Christians Remembered, Changed, and Invented Their Stories of the Savior 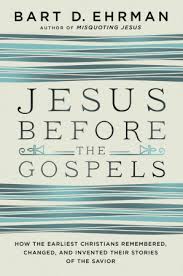 A quick Google search for “Bart Ehrman” turns up an internecine war of words between the bestselling author — a fundamentalist Christian turned atheist who is now the James A. Gray Distinguished Professor of Religious Studies at the University of North Carolina — and his conservative Christian critics.

At issue is the reliability of the Gospel narratives. Did Jesus of Nazareth really say all or even most of the things Matthew, Mark, Luke, and John have on his lips? How can we know?

Jesus Before the Gospels is Ehrman’s latest move in this long-running bout. By training, he is a textual critic, a scholar who scours through and reconstructs ancient papyri manuscripts of the New Testament and asks what the original text might have said.

While the nearly 6,000 copies and partial copies we possess today mean that we can get closer to the original readings of the New Testament than any other ancient text, it also means there’s far more work to do, and biblical textual criticism has consequently carved out its own corner in religious studies departments and seminaries. In this corner, Ehrman is revered.

Lately, however, Ehrman has stepped out of the corner and into the center of the ring in his battle with fundamentalist Christians. In Jesus Before the Gospels, he asks questions which will likely unsettle these opponents: Since the Gospels weren’t written until 50 or 60 years after Jesus’ death, how can we know their authors correctly recorded the facts of Jesus’ life? What about the manifest contradictions in the Gospels? What about the other Gospels that aren’t in the Bible? Can we know anything about Jesus at all?

Ehrman’s case rests on his work in two areas of research: form criticism and psychological work into the nature of memory. Form criticism, a method of biblical criticism that is over a hundred years old, attempts to reconstruct the situation in the first-century Christian communities that gave rise to the Gospels. A form critic reads the Bible with an eye to the oral history of the stories — the way it was passed word-of-mouth from the original eyewitnesses in Jesus’ day to the Gospels’ composition decades later.

As Ehrman puts it, a given passage in Mark or John is probably “as much about the conflicts that later Christians were having with their Jewish opponents who rejected Jesus as it is about what actually happened in Jesus’s life itself.” For this reason, the early church’s memories of Jesus became increasingly “distorted” as early Christians reshaped stories about Jesus for their own day.

Such a method may strike the casual reader of Ehrman’s book as odd, but it’s one with a venerable history in biblical scholarship. Ernst Käsemann, a 20th-century German scholar, introduced what’s often called the criterion of double dissimilarity. For scholars who use this criterion, a given passage in the Gospels probably goes back to Jesus if it differs from Jewish thought at the time and from the inchoate theology of the early church.

If it’s similar to Jewish thought, then early Jewish followers might have tried to square Jesus’ teaching with what they already believed. If it’s similar to early Christian teaching, the early church might have interpreted stories about Jesus in light of their own difficulties with their Jewish rivals or the Roman authorities. Though he doesn’t mention it explicitly, Ehrman employs this criterion with relish:

"In what context would stories emerge about Jesus’s conflicts with the Pharisees, ending in a clever one-liner? Probably in a context where the Christians themselves were being confronted by non-Christians Jews, over their refusal, for example, to keep the Jewish laws of Sabbath. Since such stories show how Jesus bested the Pharisees on such issues, they would provide a sanction for the behavior of Christians decades later. Or in what context would stories of Jesus healing the sick or raising the dead emerge? Probably in contexts where Christians were trying to prove to outsiders that Jesus was the Son of God who had come in fulfillment of the prophecies of the healing power of the coming messiah. These stories, in other words, are not so much about Jesus as they are about the community that was telling stories.”

But form criticism isn’t as well regarded in biblical scholarship as it was 50 years ago. Its star is down in Old Testament studies, and it’s been fading for years among New Testament scholars as well. Why? Because it’s far more speculative to try to figure out the unstated motives of the unknown Christian communities who produced the Gospels than to take the stories more or less at face value. Getting “behind” the Gospels to the oral tradition has proven impossible because we don’t know the people or situations that produced them.

The criterion of double dissimilarity has been subject to withering attack, too. After all, the simplest historical explanation for a story in which Jesus trounces the Pharisees in a debate is almost always that Jesus actually trounced the Pharisees in a debate. As a tool in the historian’s tool belt, this somewhat outmoded criterion is worth pulling out occasionally. Unfortunately, it appears to be Ehrman’s only tool.

This leads us to Ehrman’s application of memory research to biblical scholarship and the heart of his struggle with his fundamentalist antagonists. Traditionally, Christians have held that the New Testament books are apostolic — that is, based in one way or another on the apostles’ eyewitness testimony. Ehrman, however, denies that the Gospels were based on eyewitness testimony at all.

This is a difficult case to make, of course, because Jesus was a public figure, and many thousands of people would have heard his teachings. But Ehrman doubles down, astonishingly, by questioning the value of eyewitness testimony itself. “A report is not necessarily accurate because it is delivered by an eyewitness,” he writes. “On the contrary, eyewitness are notoriously inaccurate.”

The memory research presented in Jesus Before the Gospels — like Ehrman’s lucid retellings of 2nd- and 3rd-century non-canonical Gospel stories and explanations of form critical methodology — will draw a wide audience even among those of us typically exasperated by fundamentalist-vs.-atheist death matches. After all, using psychological studies to throw a rhetorical punch at eyewitness testimony itself is an intriguing idea, one which will doubtless fluster quite a few fundamentalists.

Unfortunately, like Ehrman’s devotion to form criticism, it leads him into utter nonsense.

Eyewitness testimony isn’t merely the foundation of all written history. It’s also the basis of our modern legal systems and the way we know anything at all that’s not true by definition. It’s not perfect, and, undoubtedly, the Gospel writers weren’t either. But doing historical work (or even stepping out the front door in the morning) requires that we trust it.

Jesus Before the Gospels has much to commend it. There’s information here that’s available nowhere else at a popular level, and Ehrman has seamlessly woven together the strands of little-known ancient sources, historiographical method, and psychological research. However, the bizarre arguments the author levels at his fundamentalist detractors should convince no one who has read widely in any of these fields.