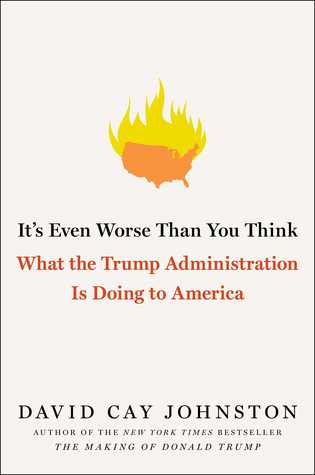 At a time when Michael Wolff’s Fire and Fury seems to have sucked all the air out of the room, David Cay Johnston has stepped forward with his own examination of President Trump and his administration so far.

A respected avatar of “Trumpology” for nearly three decades, Johnston frames his coverage from a far wider angle than Wolff’s. And he delivers a much more journalistically sound counterweight to the latter’s pyrotechnics and often shaky source attributions. When the American people, their collective wisdom reclaimed, finally tally the accounts on this president, the rather scary facts that Johnston marshals are likely to loom large in the verdict.

Make no mistake: It’s Even Worse Than You Think is a relatively early entrant in the soon-to-be-burgeoning library of Trump books. Without tabloid fireworks, Johnston succinctly distills the character and track record of the man who has described himself as “the world’s greatest person.”

In short compass, Johnston traces the rise of his subject from shifty scion of an outer-borough slumlord, to failed Jersey gambling bigwig, to blustery TV celebrity, to his current perch as leader of the free world.

At this level alone, Johnston delivers a portrait of a man that few — beyond Trump’s voter base and maybe his followers-of-convenience in Congress — could sincerely respect and admire. But many other commentators in print, online, and on (most) cable news outlets have already made this point convincingly.

For this reviewer, Johnston’s most important contributions to the growing Trump corpus emerge from his thoroughly researched commentary on the current administration’s chilling adventures in Federal policy-making and day-to-day practice. The real payoff of the book’s title, with its dispiriting promise, comes as Johnston homes in on the stunning devolution that this chief executive, his advisors, and his appointees are imposing on the Executive Branch of our government:

“The Trump administration deposited political termites throughout the structure of our government…The endgame is not just a smaller government…but a weak government that looks first after the best-off in the land, not those most in need of a helping hand in the form of a sound education, clean water, and the other basics of a healthy society in the twenty-first century.”

The middle portion of It’s Even Worse Than You Think systematically explores these institutional body blows. It chronicles the agencies most crippled by this bureaucratic assault, notably the Environmental Protection Agency and the Departments of Education, Energy, and State (although there are a dozen others on the receiving end of similar bureaucratic beat-downs by Trumpian apparatchiks).

This book provides a clear-eyed rundown of the president’s attempts to undercut the role of government in our lives, both through senior Cabinet appointments and through his appointees’ blatant inaction in staffing up the departments they now administer. For some, this forebodes bleak setbacks in responsible government as we have come to know it. For others, they are overdue correctives to a government that’s overreached its mission and values.

The outcome of this schism will arrive before too long, with the balance more likely tipped by our collective judgment on the man himself, whom wife number-one reports kept a volume of Hitler’s speeches in his nightstand. Also sure to figure in the people’s verdict, legal and perceptual, are the values and character traits of the loyalists and kleptocrats with whom Trump surrounds himself. Author Johnston has brought us a long way toward the light on both counts.

Meanwhile, the Trumpian library grows as scores of reporters and writers toil away with eyes on the prize: this generation’s All the President’s Men. It’s coming soon, and maybe sooner than you think.

Bob Duffy is a Maryland author/ghostwriter and a working consultant in branding and advertising.

Battling the Gods: Atheism in the Ancient World

A compelling argument that the roots of non-belief sprouted millennia ago.