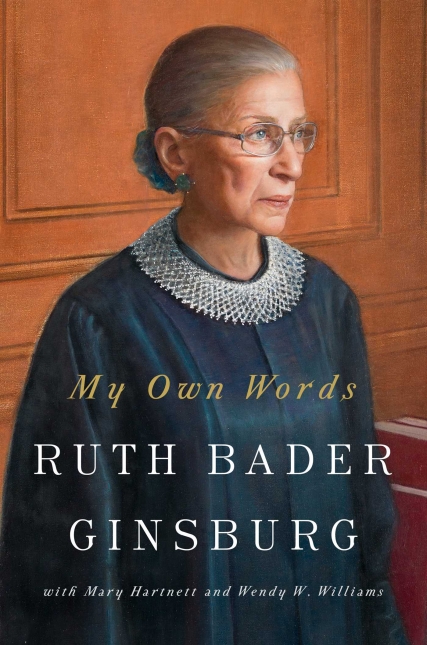 The new book by Ruth Bader Ginsburg is not an autobiography, but rather a collection of her essays, speeches, and statements from the bench dating from her childhood through the present. There are brief introductions to place the passages in the context of her life and their times. The book works well to give a sense of the life and passions of the second woman ever to serve on the Supreme Court: her deep love for her husband, her commitment to equality for women and for justice, and her constant joy at being on the court.

The book is organized in five parts. The first, “The Early Years and the Lighter Side,” begins with essays she wrote in elementary school and college and ends especially by focusing on her relationship with Justice Scalia, including the text of the Scalia/Ginsburg opera. The second part covers tributes she gave to others over the years, including to Belva Lockwood, the first woman to gain admission to the Supreme Court bar; the Jewish justices (of whom she is the sixth); Sandra Day O’Connor; and Gloria Steinem.

Part III focuses on her commitment to gender equality, including briefs she wrote as a lawyer and her statement from the bench when the court decided United States v. Virginia, which declared unconstitutional the exclusion of women from Virginia Military Institute.

Part IV, which is short, focuses on Ginsburg becoming a Supreme Court justice, and is comprised of her remarks on the day President Bill Clinton nominated her and her introductory statement to the Senate Judiciary Committee at her confirmation hearings.

Finally, Part V is a collection of writings and speeches from her time on the court. I particularly enjoyed the first of these, “The Workways of the Court,” which is the best short description I have read about how the court actually goes about its work. Also, this part includes the statements she made from the bench in a number of high-profile cases. Rather than presenting her opinions, which obviously are accessible elsewhere, the choice was made to recount her bench statements, which otherwise are not readily available.

Indeed, I think this is the greatest strength of the book: Most of what is included is not easily accessible, or even available at all. The book is primarily comprised of speeches that have not been previously published. (There are some exceptions, though, such as her Madison Lecture which was published in the NYU Law Review.)

Although this is neither an autobiography nor a biography (her collaborators on this book note that they are writing her biography), the book provides insights and information about Ginsburg. I, for example, never had known that her first name is actually Joan, but that there were so many Joans in her kindergarten class that she always has been called by her middle name, Ruth.

There is a charming essay written by her late husband, Martin Ginsburg, about how they came to handle a gender-discrimination case together and how that led to her work for gender equality for the ACLU and ultimately her career on the bench. She tells of how the government in that case, in an effort to ridicule efforts at eliminating sex discrimination, attached to its brief a list of all the federal laws that treated men and women differently. This provided the targets for Ginsburg and the ACLU in the years ahead.

There are obvious limitations to a collection of essays like this. At times, it is repetitive because Ginsburg often includes the same information in many speeches. The story of Reed v. Reed, the first Supreme Court case to declare sex discrimination unconstitutional, is told many times through the book.

There is little self-reflection, as one would hope to find in an autobiography, nor is there the external perspective that ideally is a key part of a biography. There is relatively little about her early life. Readers might want to know more about the sex discrimination Ginsburg experienced and how she dealt with it, and more about how she juggled the many parts of her life. Lawyers and judges would like to know more about her judicial philosophy, about how she goes about deciding cases, and the process of opinion writing in her chambers.

But, overall, the book works well in presenting Justice Ginsburg’s life as a lawyer and a justice. It conveys her warmth and caring, her passion for justice and especially for equality for women, and her views on judging. Although there are a number of books out now about Ginsburg, this one is special precisely because it is in her own words.

Erwin Chemerinsky is dean and Raymond Pryke Professor of First Amendment Law at the University of California, Irvine School of Law.

The Great Debate: Edmund Burke, Thomas Paine, and the Birth of Right and Left

A look at two influential figures whose conflict of ideas echoes the deep political divide of today.