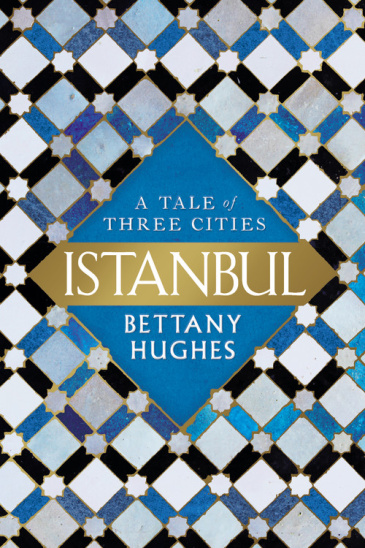 From its title, Istanbul: A Tale of Three Cities, it’s clear that this book will explore the morphing character of a place that has played a pivotal role in the human story for thousands of years. Bettany Hughes begins by taking the reader back to the prehistoric roots of the city, positioned advantageously on the straits connecting the Black Sea and the Sea of Marmara — from there just a short jaunt to the Mediterranean.

Humans have occupied this propitious location for at least 8,000 years. Known as Byzantion in the ancient world, it became an outpost in the Roman Empire. In 330 AD, the emperor Constantine renamed the city after himself, and Constantinople became the “New Rome” as the old empire crumbled.

The continuation of the Roman Empire — eventually called the Byzantine Empire — lasted until the year 1453, when it was defeated by the Turkish warriors known as the Ottomans. This locus of Christianity then became the center of an Islamic empire that stretched even farther than its predecessor.

After World War I, the Ottoman Empire was dismantled, and the capital of modern Turkey moved to Ankara. Yet throughout all of these changes, Byzantion/Constantinople/Istanbul has remained one of the great cities of the world — a source of fascination for writers (e.g., Orhan Pamuk) and historians alike.

The strength of this particular account lies in Hughes’ focus on the totality of the city’s inhabitants, not just the powerful ones. She introduces the reader to emperors and sultans, but also to slaves and refugees.

She gives emphasis to the roles women played in the city over time. Empresses and queens get their due, but so do lower-class women, nuns, and female slaves, whose voices are too often obscured in historical accounts. The result is a more complete presentation of the city’s history.

Religious and ethnic minorities feature prominently as well. We learn of persecutions in the city’s Hippodrome as paganism and Christianity clashed for prominence. The Jewish population was at times welcomed and at times tormented.

After the Ottomans took power, Christians and Jews continued to live and work in the city for centuries. Hughes shows that multiple faiths can and have coexisted throughout history, and that religious differences have been set aside when common purpose called for it.

She also incorporates the history of eunuchs throughout these various empires. Eunuchs were castrated males who had typically been captured as slaves, and after their “procedure,” they were made officials in the highest echelons of the Byzantine government and the Orthodox Church.

The Ottomans continued this tradition, with powerful eunuchs working closely with sultans, their mothers, and their wives. By weaving their story throughout the shifting politics, Hughes demonstrates just how long a non-binary view of gender has been part of the human experience.

This emphasis on the continuity of history is the book’s other great strength. When discussing the Ottoman conquest, she describes it as “neither the blood-crazed depravity nor the banner-unfurling triumph it is portrayed as being by many medieval and modern-day chroniclers of West and East.”

Instead, this city exemplifies the gradual pace of social change: the centuries-long transition from paganism to Christianity, the shift from frontier town to the New Rome, the rebranding of the city as the center of the Islamic world.

Hughes walks the reader through the city’s evolution always with an eye on its past, and she deftly points out the constant cosmopolitanism that defined the city: “Different faiths, cultures, races, all with a stake in the city, many on the make, trading, praying, politicking — ensured this was a hyper-connected place.”

Leaders of all the empires understood that this diversity sustained the city, which explains the persistence of religious tolerance and liberal migration policies, yet also the slave trade in captured peoples.

It is clear that Hughes knows and loves this city. Many chapters begin with an anecdote about a random spot in Istanbul, described in intimate detail, and then connected to a time of grandeur in the past. She describes the sights, sounds, and even the smells of the neighborhoods throughout eras, giving the reader a unique and visceral street-level view.

She also tackles orientalism head on. Rather than portray the city as “exotic” or its inhabitants as “the other,” Hughes shows just how interconnected Constantinople/Istanbul has always been to the rest of Europe. She demystifies the harem — site of so many Western stereotypes — and explains its function in the Ottoman world. This approach captures the unifying power of shared history at a time when divisions around the world are being emphasized and exploited.

Including maps throughout the text would have helped readers visualize both the sweep of empires and the neighborhood-level detail she describes. Clocking in at 600 pages (not counting appendices and notes), this is not exactly a breezy read.

But Hughes’ conversational tone makes the book extremely approachable, regardless of one’s familiarity with the city. Peeling back layers of time and fantasy, she shows us why this city is such an integral part of humanity’s story.