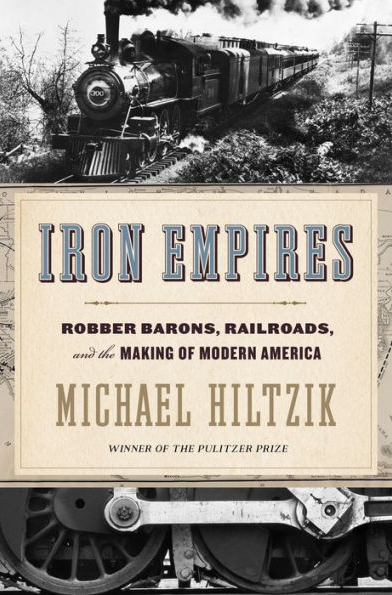 Of all the pivotal technologies of the last two centuries — cars, telephones, TV, computers, even the internet — railroads, the old kind with steam engines, arguably had the most profound impact on shaping America. Starting from the 1840s, railroads took the country from the horse-and-buggy to the industrial age and made possible all the others.

The real boom in American railroads came after the Civil War, and the sheer scale is astounding. Starting from fewer than 30,000 miles of track in 1860, a parade of grasping, enterprising companies had, by 1890, laid down 163,000 miles more, an enormous project costing billions of dollars, employing armies of workers, and crisscrossing the continent. The first transcontinental railroad, completed in 1869, literally changed the nation’s physical structure.

Railroads not only revolutionized travel, they settled the western frontier; absorbed waves of immigrants; created the modern finance, steel, and banking industries; made possible mighty cities; created the labor movement and women’s movement; integrated agriculture and coal mining; and so much more. Conversely, their byproducts included corruption, financial panics, the near extinction of the buffalo, and the subjugation of entire peoples, including Native Americans, Midwest farmers, and the railroads' employees.

It was all part of the package.

Michael Hiltzik, an accomplished journalist and historian who won a Pulitzer Prize in 1999 for reporting on music-industry corruption for the L.A. Times, brings us, in Iron Empires, the story of American railroads as a panoramic epic. He opens with none less than Robert Louis Stevenson, future author of Treasure Island, riding the rails in 1879 to witness America at its cutting edge, mixing with emigrants herded west to settle the country and enrich investors like widgets from a factory.

But Hiltzik’s special focus is on a tiny circle of titans, the capitalists who gambled fortunes on the new industry. These men (yes, all men), a parade of expansive personalities, built (and often lost) stupendous fortunes and exercised a level of power — physical, financial, political, even cultural — rivaling presidents or kings.

They were the celebrities of the age, and despite their accomplishments, or perhaps because of them, they displayed every human foible of the great and near great: vanity, ambition, and an affinity for tragedy and failure.

And what a story they tell. Hiltzik presents his tycoons as a progression, reflecting the evolution of railroads from wild speculation to a mature, dominant industry. First came the crooks and shysters like Daniel Drew, Jim Fisk, and Jay Gould, whose Wall Street shenanigans alone created opera bouffe of the first order.

Does Hiltzik overstate the importance of these titans? The railroads were vital, but do the powermonger capitalists really deserve the lion’s share of the credit or blame compared to the role played by hundreds of thousands of workmen, engineers, investors, taxpayers, and customers? It’s easy and enjoyable to be drawn to these classic financial celebrities — and, yes, it makes for a good read — but do they merit the attention?

Hiltzik himself wrestles with this question and takes a decided point of view: “Whatever the motivations of these twin tycoons,” he says, for instance, of Harriman and Morgan, “efforts like theirs are necessary for the development of any innovative and disruptive technology.”

To present the opposite side, he gives us Louis Brandeis, future Supreme Court justice and the archetypical progressive, who argued against concentrated power in his classic 1914 book, Other People’s Money and How the Bankers Use It. As Hiltzik explains, Brandeis never questions that the titans deserve credit, but “only that they do did not deserve all the credit” for the railroads.

To Brandeis, the titans should share “equally” with inventors, laborers, and the rest. Their “financiering,” as he called it, mainly just moved paper and money, mostly into their own pockets. Or, in Hillary Clinton’s words, “It takes a village” to build a railroad.

The Progressive Era itself Hiltzik portrays largely as a downer. Led by Roosevelt and dominating the early 20th century, progressives placed the destiny of the railroads in the hands of government bureaucrats who swung the pendulum too far the opposite way. The Interstate Commerce Committee, the author argues, compelled rail companies to lower rates to unsustainable levels.

Progressive congressmen forced 75-year-old J.P. Morgan to testify publicly about his private business, a remarkable performance during which Morgan essentially denied running his own company. Progressive “trust busters” used the Sherman Antitrust Act to break up the Union Pacific system, a decision reversed a century later. When the country entered World War I in 1917, the lines were virtually nationalized for the war effort.

These steps hastened the subsequent deterioration of the rail lines and added to the rise of trucks, cars, airplanes, and other 20th-century competitors. The passing of the titan financiers’ power did, in fact, coincide with the end of railroads’ golden age.

Personally, my sympathies in the argument align with Brandeis’ — the titans made a grand show of making themselves rich at the expense of the public, laying thousands of miles of redundant track and occasionally benefiting society as a side-product.

Even so, Iron Empires is a grand story well told. The basic lesson? The railroads weren’t an impersonal force of nature, but rather something built, funded, directed, and abused by human beings, with all their virtues and faults, for purposes good, evil, and pedestrian. It’s a lesson we can apply today to our own modern titans of the internet and other groundbreaking contemporary inventions.

Ken Ackerman is a lawyer and writer in Washington, DC. His books include The Gold Ring: Jay Gould, Jim Fisk, and Black Friday 1869 and Boss Tweed: The Corrupt Pol Who Conceived the Soul of Modern New York.