Into the Inferno: A Photographer’s Journey through California’s Megafires and Fallout

Holding the line against unrelenting flames. 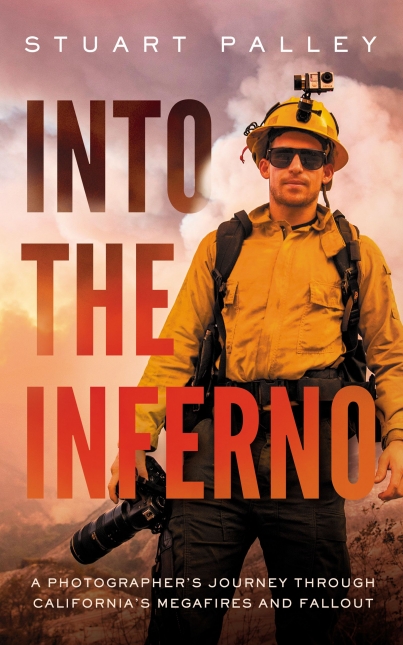 On the cover of his book, Stuart Palley stands decked out in thick fabrics, heavy-duty straps over his shoulders and around his waist, a small camera attached to his yellow helmet, and a DSLR with a serious zoom lens in his hand. Behind him is a sky filled with white clouds, the kind that billow only from fire. The glow on the horizon could almost be a setting sun.

It’s a wildfire photographer’s job to chronicle the blazes that tear through built and unbuilt terrain. This puts Palley in the company of only one other group of people who walk toward rampaging flames: firefighters.

Into the Inferno is a nature book, a disaster-chasing book, a California book. It’s the story of a man mesmerized by the seasonal fires that sweep the American West grappling with what it does to a person to face something so large, so powerful, so destructive. How small a human is in comparison, how flimsy everything humans have built.

As he ventures into the fire world, for his own safety and to avoid becoming a liability for first-responders, Palley studies the experts. Over time, he writes, “I began to pick out the subtle details of how a fire is fought. I learned their jargon, radio parlance, body language. The right way to rig an element, tie your boot laces, the local terms, and weather influences.” He sees how new fires burn in the footprints of fires past and watches the variables that orchestrate variations on the theme.

To capture a fire’s story in a single snapshot, Palley looks for an angle that illustrates the broad patterns and individual tragedies. Many of these tragedies come as wildfires spill more often into the "wildland-urban interface," the name for the transition zone where built and natural environments intertwine. When it becomes a story of fire versus subdivisions? Well, homes are made of largely flammable materials, and fire is a great equalizer.

Palley bears witness to the destruction of a home with a Rolls-Royce Phantom parked in front and the leveling of an entire trailer park; he describes walking onto the scene of a search-and-rescue with heartbreakingly little rescue.

The book is full of the language of fire — relative humidity and fuels, fire regimes and pyrocumulus — in which the author has been steeped. This mixes with his photographer’s eye: He describes one burned area as a “palette of grays, ashen earth, and the rust color of burned steel and melted aluminum.” Beyond the look and mechanics of wildfires, Palley gives the reader a taste of the full-sensory assault of the flames: the incessant scream of smoke detectors in burning homes, the inescapable smell of smoke permeating his clothes, trapped in his food.

Much of the book is straightforward in describing the circumstances surrounding the images he shoots (a few of which are reproduced in monochrome at the book’s end, though they don’t hold a candle to the versions on his Instagram page), but he occasionally leans poetic, describing “a sea of fire engines…moored to fire hydrants in front of each house, lights flashing in the night,” the subdivision road remade as “a harbor for half the fire engines in the county.”

Encountering a wildfire even once changes a person; re-encountering it over and over forges them anew, and any fire-chaser in California in the 2010s enjoyed a terrible embarrassment of riches. A reader could be forgiven for losing track of which blaze is which as Palley crisscrosses the state in the course of eight seasons, hopping between Northern California and tracing back down to the U.S.-Mexico border, bearing witness to multiple record-shattering conflagrations, walking through dozens of immolated moonscapes.

Perhaps more than anything else, Palley struggles with how many fires there are — how many stories that deserve to be told — and the limits of a writer or photographer to tell them. To be entrusted to produce images for prominent media outlets, showing the nation and the world what is happening, is a high calling, one that makes it hard for Palley to sit out a fire. His struggle with balance and trauma echoes the burden firefighters and other first-responders shoulder in a woefully understaffed profession. It surprised me to learn that California also puts its prisoners on the fire line, something Palley mentions only in passing.

Palley offers his testimony to illustrate an inexorable conclusion: These disasters — he uses the term megafire to signal their novel scale — are poised to become commonplace. But the worst outcomes are not inevitable. Palley argues that better policies, from revamping local building codes to global action against climate change, are critical and have been too long neglected. Near the end of the book, he asks:

“What do we call a fire siege fueled by historic fire suppression, [wildland-urban interface] development, and climate change that we can’t even fight? Is it a wildfire? Or is it some sort of inferno we just need to run from?”

Next to the California that stands in the American cultural imagination as a sun-drenched paradise, Palley (a native Southern Californian) offers its dark twin, one filled with apocalyptic scenes of an inhospitable, almost uninhabitable terrain. One of his photos — burning palm trees ringing a swimming pool — captures the two realities. Between paradise and the inferno is an ever-moving fire line where the author stands, trying to capture the encroachment of one on the other. Beautiful places are often disaster-prone, but what happens when humans are lighting the match?