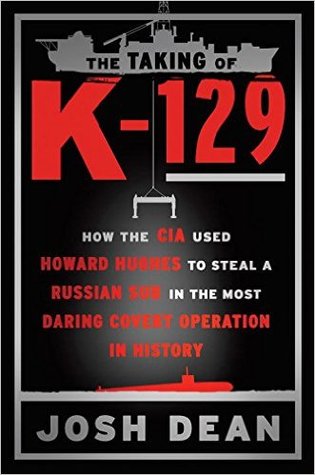 In The Taking of K-129, Josh Dean has masterfully unspooled a Cold War story of derring-do, spycraft, and deception reminiscent of the novels of John Le Carré. It’s an incredible tale.

On February 24, 1968, Soviet nuclear ballistic submarine K-129 left Russia’s remote Kamchatka Peninsula. Its mission was to spy on U.S. naval operations in the northern Pacific and, with its three nuclear missiles, to be war-ready.

U.S. and Russian subs had long played a relentless Cold War game of hide-and-seek. This time, however, the game proved deadly. The Russian sub lost its steering buoyancy, plunged downward, and was crushed in the depths.

Shortly thereafter, the Navy and the CIA searched for the destroyed submarine and, by using undersea hydrophones, found it laying in 17,000 feet of water 1,560 nautical miles northeast of Oahu. Thus began a plot to raise from the depths a heavy craft the size and weight of a modern destroyer by utilizing an engineering technology that had to be invented out of whole cloth.

At the center of the plot stood CIA special agent John Parangosky, who raised $350 million to steal the submarine from the Russians and was able to construct a fake maritime rationale that fooled the world for four years. It would be one of the most expensive black ops in modern history.

To the world at large, the construction of the ship Glomar Explorer was part of eccentric billionaire Howard Hughes’ pursuit on the ocean floor of valuable manganese globules that constituted much of the world’s copper supply. The CIA was able to accomplish its mission in public view — and despite a budget-wary Congress — thanks to the tireless efforts of Parangosky.

Global Marine, the firm that built the Explorer, excelled in underwater drilling and exploration; in its lead engineer, John Graham, the company had a man whose engineering prowess and artistic vision were unrivaled.

The task: To build a ship with a grappling device that would descend on a long pipe string, grab the sub, and haul it to the surface. On countless paper napkins, Graham made notations from a slide rule, as computers were in their infancy and not reliable.

For both the CIA and the U.S. military, the stakes were high. A Soviet nuclear submarine in American hands could offer a wealth of technological knowledge ranging from ship construction to the Russian assembly of nuclear warheads. Parangosky had one simple question that he put to the task force of engineers, electricians, and optics people: How do we steal it?

It was a situation that seemed more applicable to a Hollywood movie set than to a shipyard on the Chester River near Philadelphia. As Dean writes, “Here was a group of men only two of whom had any experience working in oceans, tasked with solving the single largest engineering challenge in intelligence and maritime history.”

To add to Parangosky’s worries, chief architect John Graham was a reformed alcoholic whose top-secret clearance had to be delicately finessed using all of the CIA agent’s resources. Getting Howard Hughes and Hughes Tool Company to be the contractor that hired Global Marine completed what the CIA hoped would be a “bullet-proof lie.”

Dean describes the kind of craft that came from the engineering drawing board: “an enormous ship that deploys an enormous claw at the end of a string of pipe to steal a submarine from three miles under the ocean, ten times deeper than any previous salvage operation in history.”

Construction of the boat was done out in the open to convince the public that Howard Hughes was just crazy enough to mine the ocean. The biggest problem would be assembling 584 sections of “pipe string” to bring the sub to the surface.

Meanwhile, CIA Director William Colby depended on Secretary of State Henry Kissinger and his secret committee of 40 State Department and military officials to prevent any information on the true nature of the project from leaking out.

By the time the pipe string was ready to go, two Soviet ships were at the site of the fallen sub. These were curious small ships that had no inkling of the enormity of the plot. The Americans, however, feared that the Soviets suspected something fishy and would try to board with armed men to have a look. After a number of encounters, the Russian crew dropped their trousers to the Americans as they headed back toward Russia.

The Glomar Explorer quickly went to work lowering the grappler and raising the sub. To the extreme disappointment of both the crew and the CIA, several tines of the grappler broke, and half the submarine plunged to the bottom of the ocean and broke into pieces.

With half a Russian submarine, however, the Explorer obtained an officer’s technical diary of the ballistic missiles on the ship. Of vital information were insights on the vessel’s electronics and infrastructure which, to a great extent, was shoddy and years behind U.S. advances.

The most salutary development of the entire plot, writes Dean, was that American engineers financed by the CIA were able to “introduce a host of new technologies that actually worked in extremely deep water and construct a ship decades ahead of its time, designed and built by engineers using slide rules.” It also paved the way for the construction of large offshore-drilling vessels.

In the spring of 1975, the CIA was no longer able to keep its big secret. Information began to leak out from a variety of sources. Columnist Jack Anderson and investigative reporter Seymour Hersh wrote about the K-129 and blew the story wide open. Soviets complained to President Gerald Ford about violations of international law, but they never acknowledged the loss of their ballistic sub.

After retiring from the CIA, John Parangosky received the National Security Medal and other awards for keeping locked tight for four years what may have been one of the biggest secrets of the Cold War.

The Taking of K-129 sets a high bar for nonfiction books about the interplay of government secrecy and maritime engineering. Occasionally, Dean offers the reader too much technological detail, but this is a modest criticism.

John R. Wennersten is an environmental-policy writer and emeritus professor of American history at the University of Maryland, Eastern Shore. His latest book, Rising Tides: Climate Refugees in the Twenty-First Century, co-authored with Denise Robbins, was published last spring by Indiana University Press.

Because Our Fathers Lied: A Memoir of Truth and Family, from Vietnam to Today

A son wrestles with the horrible legacy of a pointless war.