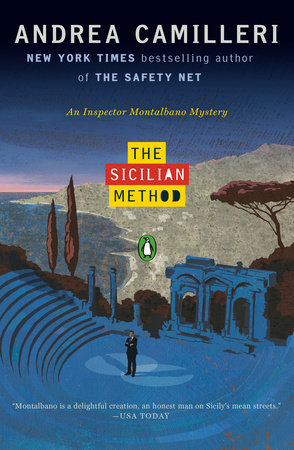 This volume is both one of the best and one I liked least in the wonderful detective series set in a small town in contemporary Italy. No, I’m not trying to imitate the best of times, worst of times — that line belongs to Dickens — but there is a definite dichotomy in my feelings for The Sicilian Method, number 26 in the adventures of Inspector Salvo Montalbano of Vigata, Sicily.

Released posthumously this past October, the book was written in 2017 but put out for translation later. Author Andrea Camilleri, who died in 2019, was likely well aware, by the book’s completion, that death would soon become a reality. He used this book to give us a brilliantly constructed mystery with much humor, new insights into his main character, and a deeper understanding of the author himself and the world of theater that he loved and in which he honed his craft.

The book opens with Montalbano awakening to a pounding at his door in the middle of the night. Unfortunately, it’s not a dream. It seems that Mimì Augello, his assistant detective and an incurable lady’s man, has encountered a corpse on the way out of the apartment of his latest mistress.

Because Mimì doesn’t want his wife or the woman’s husband to learn of the affair, he does not report the dead body. Instead, he runs to Montalbano, laying the problem literally at his door. Ever the loyal friend, Montalbano ponders a way to “find” the corpse the next day so that they can solve the murder without reference to Mimì’s late-night activities.

However, the situation becomes more complicated when the body vanishes and a second one appears. Connection? Maybe. The second corpse is that of an amateur theatrical director and part-time loan shark whose unique methods of auditioning local would-be actors may have motivated his killer.

For good measure, the Vigata crime scene sprouts a third case, though not a homicide. Instead, a young man leaving his house for work is shot in the leg by an unknown assailant. Montalbano begins to pull the threads of all three crimes into a coherent tapestry. Vigata station regulars Catarella and Fazio are on the scene: Catarella injecting the usual humor by mangling names; Fazio bringing common sense to the fore when things begin to derail.

Along the way, we are introduced to a panoply of information about Italian theater that reveals new sides of Montalbano and bares the soul of the author, who was a famous stage and television director in Italy before he retired and began penning this series.

The appearance of a new female character, the extremely attractive and competent chief of forensics, Antonia Nicoletti, complicates Montalbano’s personal situation but is helpful in resolving the crimes. She arrives when the erstwhile Livia of Genoa and Montalbano are going through a difficult patch. Antonia shares Montalbano’s love for food, enjoys discussing the case with him outside the office, and also enjoys “other activities.”

Their relationship inspires in Montalbano a desire to reinvent himself and adds a twist to the novel’s ending that is a smoothly executed volta from the standpoint of the writing but left me, as a fan, a bit annoyed with Salvo. But not so annoyed as to dislike the book.

Reading The Sicilian Method was time well spent both for the insights into Camilleri and for the entertainment of watching my favorite detective eat his way through the problems laid before him until he solves a complicated, exciting mystery set against the magical landscape of Sicily. If you’re a devotee of the series, you won’t want to miss it and will want more.

Fortunately for dedicated readers, Camilleri didn’t leave his characters to wander in search of an author: This is not the last book in the series. According to translator Stephen Sartarelli, at least two more Montalbano mysteries will be published. Knowing he was nearing the end of his life, Camilleri wrote a conclusion to the series and placed it in a “vault” to be released after his death.

Says Sartarelli of the next book, which he has already translated, “It will be called The Cook of the Halcyon, a fun tale but with no connection to the title before it or the one that will come after it, Riccardino, which will be the very last in the series.” He adds that Riccardino is also from Camilleri’s “vault” and contains some surprises.

I look forward to these concluding installments and to re-immersing myself in the series again and again.

Joan Leotta is a writer of poetry, short fiction, and essays, and a professional story performer. Her chapbook, Languid Lusciousness with Lemon, is out from Finishing Line Press. Onstage, she has presented tales that hark back to her own Italian heritage and love for food, family, and strong women. She has appeared in Kennedy Center festivals and at DC-area schools, museums, and festivals.