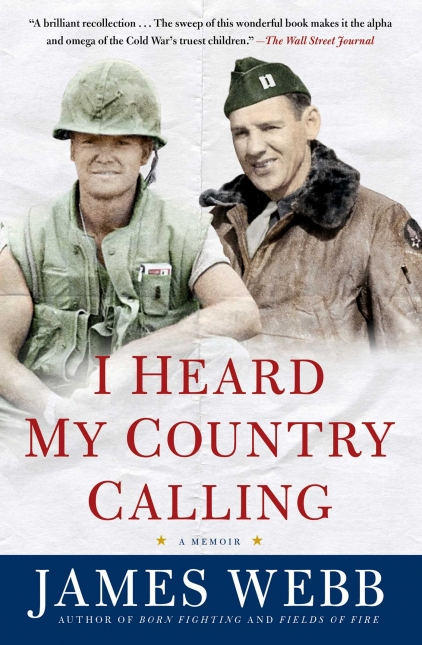 “Shut up and die like a man.” These are the words that Marines often say to one another during combat. It is a down-and-dirty rendition of the Naval Academy motto that Jim Webb learned early in his military career: non sibi, sed patriae — not self, but country.

Webb’s I Heard My Country Calling rings with unvarnished dictums like these. Without flinching, he tells us of the grisliness and heroism he witnessed as a Marine in Vietnam. Most striking and familiar to me was his citing of the smells that no combatant will ever forget, particularly the stench of “high explosives and quarts of blood, where the explosion has been immediate and only inches away from the body it has ripped apart.”

But Webb isn’t into combat pornography, taking pleasure in the graphic. His purpose instead is to make us see and understand what men and women in war go through and the guts it takes to get the job done. And his narrative offers an inside, no-punches-held look at the life of a man to whom independence was more important than money or power.

I Heard My Country Calling begins with Webb’s childhood as a member of a military family. His father, an Air Force officer, was so dedicated to his country that he moved his family 30 times in 24 years. Webb’s early athletic career as a boxer led him to victories based less on his skill and strength than on his unflagging determination. That same drive shaped the rest of his life as a Marine, a government official, a U.S. Senator, and a prize-winning novelist.

Nowhere in the book does Webb claim to be in any sense superior. When he is awarded a full Naval ROTC scholarship, he thinks to himself that there may be people smarter than him, some who are better athletes, others who are better prepared for college: “In the end…none of that counted. I had one thing to offer that nobody else could top: nobody is going to outwork me.” The evidence recounted in the memoir supports his claim. He drove himself brutally.

After graduating from the Naval Academy, he opted for the Marine Corps. Combat in Vietnam’s An Hoa basin followed, during which he was wounded twice; the second wound was so serious that he medically retired from the Corps. Law school and government assignments came next, which led to his stints as Secretary of the Navy and a U.S. Senator from Virginia.

Through it all, he wrote — articles, reports, stories, essays, and finally books. The finest, in this reviewer’s opinion, was his 1978 novel, Fields of Fire, arguably the best novel so far written on the Vietnam War. Two themes masterfully explored in that novel recur in I Heard My Country Calling: how it comes to pass that good men commit atrocities during combat, and the moral dilemma raised by war.

The atrocity issue appears as Webb recounts his effort to help a black soldier, Sam Green, convicted of a war crime because he obeyed an order to shoot civilians. That effort came to an end when the soldier, disconsolate, killed himself.

With respect to the morality of war, Webb points out that soldiers and Marines do not make the decision to go to war. They follow orders. Of those who condemn the Vietnam fighting men, one might ask (Webb does not) how many died in rallies and protests against the war.

Webb offers the following statistics about his branch of the service: the U.S. Marine Corps suffered five times as many dead in Vietnam as in World War I, three times as many dead as in Korea, and more total killed and wounded than in all of World War II, the so-called “good war.” He cites the saying that all Naval Academy midshipmen were required to memorize: “Always pray, not that I shall come back, but that I will have the courage to do my duty.”

In a different context, Webb goes a step further. He tells us that while he was fighting with the Marines in An Hoa, he was offered the opportunity to be transferred to Okinawa because he had been wounded twice and had endured extensive combat. He turned down the offer. “I could not simply walk away. Bonds formed on the battlefield are often as unbreakable as the strongest family ties. In a word, I felt obligated. Like my father, service to country defined my self-respect.”

Throughout the book, two vocations contend for Webb’s attention: leadership and writing. As he tells it, each gets in the way of the other. I might counter that writing on subjects that dominate I Heard My Country Calling is one way of leading. And accepting the role of leadership, from teenaged boxer to U.S. Senator, offers the grist for writing worth reading.

Striking to me is Webb’s reticence on his wife and children, whom he only mentions in passing. Late in the book, he speaks of Hong Le — to whom the book is dedicated — a Vietnamese refugee he married. She is apparently not his first wife or the mother of his children. Equally mystifying is the little text devoted to his time as a senator. I came away from the end of the book sensing that this is perhaps the first volume in a series.

The writing from beginning to end is excellent. Webb has honed his craftsmanship to the point that glorious sentences roll out, one after another, though one might ask for more economy here and there. My guess is that here, as in other endeavors, no one has worked harder than Webb to master the art. I found the first two-thirds of the book totally enjoyable, less because of the content — Webb’s early life — than because of the writerly skill. The last third, starting with Webb’s experience in Vietnam, I found riveting. Everything, from his childhood to the U.S. Senate, is put in context by extraordinary historical background. If you know Webb’s writing, you know that history is one of his fascinations, and the backdrop of history informs each episode.

The memoir ends with “Aunt Lena’s Test.” Lena was Webb’s great-aunt who, late in the story, refused to allow him in her house because he was working for the government and must therefore have sold out. Webb and his aunt were later reconciled, but Webb had learned his lesson. He says that when he is debating the merits of one policy or another, he gives himself the Aunt Lena Test: Would Aunt Lena let you in her house today?

Tom Glenn has been writing since he was 6, but spent the better part of 13 years in Vietnam and was evacuated under fire when Saigon fell. Like Jim Webb, his life has been split between service and writing. His Vietnam novel-in-stories, Friendly Casualties, was published in 2012. Apprentice House of Baltimore just published his newest novel, No-Accounts.

A WWI hero gets his due as he climbs from school dropout to aviation ace.