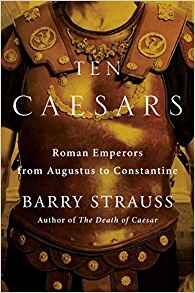 In its treatment of the Roman Empire’s first four centuries, this entertaining serial biography is unapologetically top-level in both style and subject matter. With an apparent nod to Suetonius’ The Twelve Caesars, classical historian Barry Strauss, in Ten Caesars, has trotted out his own Top 10 among the more than 50 emperors who ruled during the period.

Librarians and casual readers alike should love this selective emperor’s-eye view of Roman history, but scholarly types might resist its choosy specificity. For its intended audience, though, Ten Caesars more than compensates for its lacunae and relative lack of ground-level context. Its ample illustrations, family trees, and index also add value.

Author Strauss, in framing out the highs and lows of the Western empire’s rise and fall, again proves himself mindful of the choice detail or splendid anecdote likely to appeal to today’s readers. His narrative — informative, entertaining, often refreshingly colloquial — traces the careers and personalities of his subjects with succinct and witty precision.

He doesn’t spare us the nasty bits, either, evenhandedly dishing on the bloody, the duplicitous, and the libidinal nitty-gritty of his subjects’ lives. He reminds us throughout that life for an emperor — or any serious contestant for that status — could often be as bumpy as a chariot ride on the Via Appia, although not without its luxurious compensations.

On the plus side, a successful emperor could count on being declared a god at his death, and —for the singularly distinguished or powerful — a berth in the afterlife in the divine company of his wife, mother, and maybe a sister or two. This touches on a fascinating undercurrent in the book: how frequently powerful and charismatic women emerge in Roman history.

A late example is the 4th-century Christian Helena, daughter of an innkeeper and mother/advisor to Emperor Constantine. A devout pilgrim to the Holy Land, Helena is deemed a saint in both Eastern and Western Christianity.

The early years of the empire offer a wealth of powerful female luminaries, as well. Take “noble, bright, and beautiful” Livia, blueblood wife of Augustus (who ruled 27 BC-14 AD). Livia, in Strauss’ view, is a “soulmate” to the first emperor, equal to her husband in intelligence and ambition. Also prominent in his account: Agrippina, wife of, and effective co-ruler with, Claudius (r. 41-54 AD).

Agrippina is also the mother of Nero and, if we accept certain scurrilous contemporary rumors, his lover. Whatever the truth, optima mater Agrippina enjoys unprecedented privilege under her son. She has her own unit of the Praetorian Guard, the Roman elite force that wielded significant political influence (including, in years to come, the power to select and depose emperors).

Nero also allows Agrippina to watch confidential Senate proceedings from concealment, Polonius-like, behind a curtain. Ultimately, though, by demanding a say over imperial expenditures, Agrippina crosses her mercurial son. In Strauss’ words, “She could give her son the empire but not bear him ruling it.” Nero, in what was likely his second attempt at it, has her killed.

Later, the pattern repeats itself, with Nero’s highborn, beautiful, and pregnant second wife, Poppea. She, too, passes in untimely fashion, reputedly after an energetic kick from her husband. The emperor mourns her grandiloquently and has her deified, after the contemporary custom. Then, still in mourning, Nero encounters a young man who resembles Poppea. Consumed anew in ardent bereavement, he orders the guy decked out like Poppea, then castrates and marries the fellow.

Nero’s path to the throne was not a direct one. The product of Agrippina’s first marriage, he, like many emperors, is adopted by her husband, the emperor Claudius, thereby legitimatizing him as a potential successor. This was a familiar practice: Octavian (later Augustus) is adopted by Julius Caesar; Tiberius by Augustus; Caligula by Germanicus; and on down the line. Eligibility by legal document becomes the standard.

So intertwined was the practice of adoption with notions of succession that Severus, another of Strauss’ Big 10 (r. 193-211 AD), contrived to jump the line by adopting himself by proxy into the family of his predecessor. And Hadrian (r. 117-138 AD) reputedly dummies up counterfeit adoption paperwork after his predecessor Trajan’s death.

Constantine (d. 337 AD) rounds out the lineup. After him, the locus of rule shifts progressively eastward and, ultimately, to Constantinople, the crossroads between Europe and Asia.

Ten Caesars may be necessarily selective, but this doesn’t imperil the span of Strauss’ coverage. He’s a widely acknowledged expert, the author of eight books on ancient military history. He fills in the gaps between rulers, though a bit sparely, with admirable taste and precision. The casual reader emerges with a sense that he or she has sampled the full sweep of Roman history.