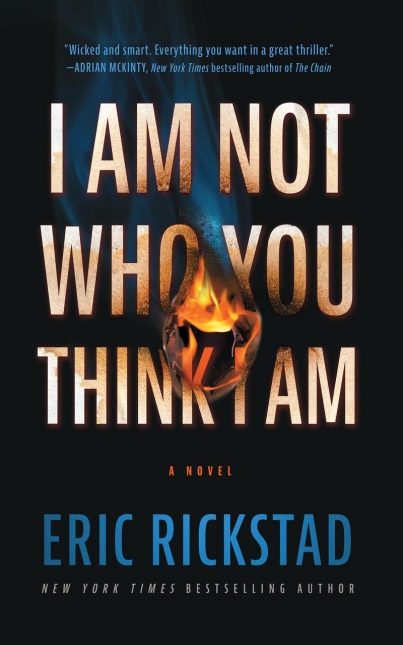 Eric Rickstad’s I Am Not Who You Think I Am mixes the internecine battles of a high school drama with the thrills of a small-town gothic mystery. Rickstad, who cut his teeth on crime novels with stereotypically moody covers, continues in that vein. In this instance, rather than a dark, foreboding wood signaling that something frightening awaits, the cover features an inferno, making clear the conflagration to come.

In some cases, you really can judge a book by its cover.

A trigger warning is probably needed here: The novel focuses on a purported suicide, includes the sexual exploitation of a minor, and features various forms of traumatizing injury and torture that befall our protagonist, Wayland Maynard.

Wayland, a high school student in Vermont, has become suspicious of the events surrounding his father's suicide several years earlier. He is skeptical that it really was his father he saw shoot himself — despite the fact that Wayland witnessed the act and, as we graphically learn, exited his house covered with his father’s blood and viscera.

Intentionally or not, the book focuses on a question central to most teen fiction: Who can you trust? In Wayland’s case, the answer seems to be no one.

The first betrayal comes at the hands of his mother, who, immediately upon his father's death, disposes of everything surrounding her late husband. She tosses his clothing, his books, his papers. Anything, in fact, that Wayland might wish to keep as a memento. What could she be hiding? It’s almost as if she knows that, given access to these items, Wayland will be able to solve a riddle.

Wayland is also betrayed by his friends. His closest pal, Clay, physically abuses him in typical “bro” fashion. Clay pounds on Wayland and belittles him, potentially costing Wayland a shot at a girl, Juliette. In fact, Clay may be moving in on Juliette behind Wayland’s back.

Soon, in a standard whodunit trope, Wayland learns that his father wasn’t who he claimed to be. Instead, he was actually a bastard child given up for adoption by a member of a powerful and wealthy local family. The hiding of this scandal makes deception a multi-generational affair.

So, who was Dad? He had led his son to believe he was the successful owner of a barber shop, but some minimal digging reveals that it is his wealthy birth family who actually owns the business. How much did Wayland’s father know about his own genealogy and apparent benefactors? That is to be determined.

Ironically, for a book about the consequences of past actions, the consequences of violence don’t exist here. Wayland suffers countless assaults and injuries yet keeps bouncing back, Energizer Bunny-style. Along with being pounded on repeatedly by Clay, he falls through broken windows, drops into a moldy basement, gouges himself on railings, and otherwise finds himself a bloody mess.

Just when you start to think the boy needs to get himself to a hospital, stat, Wayland finds yet another way to injure his already battered body. It’s hard to believe no one in authority notices his scars.

It is also a weakness that the supporting characters are two-dimensional clichés. Mom is a harried single parent; Wayland’s younger sister is every troubled, rebellious teen you’ve ever read about; Clay is a mindless jock. And while fair Juliette’s own family life is alluded to as difficult, it’s hand-waved away before we have a chance to become engaged.

Another weakness is the implausible dominance of the rich family that rules the town. Such a villainous group serves as a useful foil, to be sure, but it’s hard to imagine it existing in the real world. Narrative gaps are another stumbling point: Wayland just imagines a location he needs to be in and, boom, he’s there. We don’t need to witness every step he takes — this isn’t Ulysses — but some transitions would’ve been helpful, as would fewer odd time jumps, chance meetings, and coincidences.

If you're looking for a straightforward, not-too-challenging mystery, then I Am Not Who You Think I Am is a fine choice. Just don't expect to remember much about it when you’re done.

A series of conversations reveal uncomfortable truths about the myriad reasons why relationships fail.