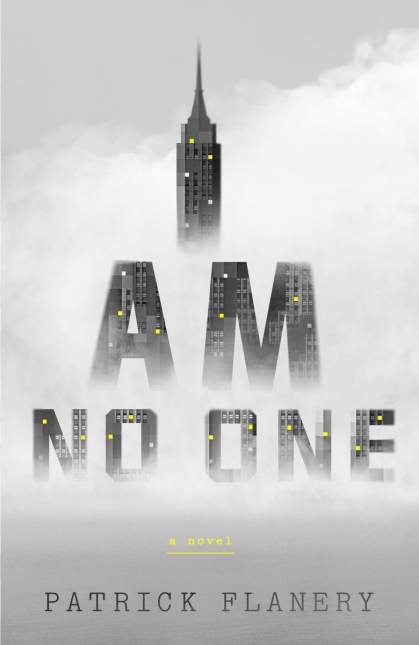 In an age of wiretaps, satellites, geolocation, and who-knows-what-else, Patrick Flanery has written a believable and thought-provoking story that takes a close look at what it feels like to sense someone is out there. Watching.

I Am No One’s main character, Jeremy O’Keefe, has a tendency to address the reader directly, to warn that he doesn’t know what’s happening, and that no one else may be able to guess the outcome of his predicament, either. As Jeremy writes, he tells the reader he doesn’t know if anyone will ever read his words.

“You who read it, whoever you are, in whatever number, are undoubtedly already drawing conclusions about me, reading between the lines and making assumptions despite my protestations of innocence.”

Innocent of what? the reader is prompted to wonder. We can’t tell what’s going to happen, but Flanery’s narrative style makes us want to find out.

Jeremy is highly intelligent, a professor of German history who has recently returned to America to teach at New York University after a decade at Oxford. We might hate him for his pomposity, but he has a way of poking fun at his own upper-crust nature. For example, when he invites a stranger to his second home, a getaway outside the bustle of New York City, he offers this witty commentary:

“I resumed my place on the couch and motioned for him to sit in one of the hard-backed wooden chairs I had acquired at that same tag sale in Hudson where I bought my up-state cutlery from a couple of on-the-make young homosexuals trying to transform another corner of rural poverty into a land of antiques and artisanal cheeses.”

Introspection plays a key narrative role in Flanery’s book. When Jeremy, who is beginning to fear he is losing his mind and/or slipping into dementia, goes for a brain scan, he ponders an interesting idea: “How long, I wondered, before they invent a machine capable of reading our thoughts better than we can ourselves?”

At times, he believes he looks out his apartment window and sees someone standing on the sidewalk, peering into his living room. He receives odd deliveries that seem to indicate someone is trying to send him a menacing message.

In all of this, Flanery hits home for many of us when he communicates so poetically, through Jeremy, about a simpler time in the not-so-distant past. For example, the not-so-delightful mobile phone Jeremy receives as a gift from his daughter, who says she just wants to be sure she can reach him.

“Once a landline was enough, and I wonder if, in the past, we didn’t trust each other more, knowing there would be stretches of every day when we would not be able to contact our spouses or children or parents, trusting that they were simply getting on with their lives and being faithful to us and whatever they later reported having done was true, or at least plausible.”

I remember that time fondly. I’m sure my teenage children sometimes wish for that pre-mobile-phone era when I become irate at them for not answering my text messages. Yet even as he vividly writes about the annoyance of never being unplugged, Flanery reminds us of the importance of human connections.

Long divorced, Jeremy still pines for his ex-wife, Susan, remembering what it’s like to know someone, and to be known, in turn. Flanery expertly delves inside his character’s mind, illustrating thoughts that go from observation to fantasy:

“Now, however, she smiled and warmed under my gaze and it was that response, her evident enjoyment of my company, that allowed my mind to wander off and imagine what it would be like to live with her once again, to make all our lives so much less complicated than they had become since my departure.”

While Jeremy strongly believes he is under some type of surveillance, it puzzles him because, as he tells his adult daughter, “I’m no one.” Just a run-of-the-mill academic. A man who always tucks in his shirts and has a predictable daily routine and bland love life.

As the story moves along, Jeremy himself wonders if he has committed a crime in his past and erased it from memory. This becomes more and more believable as Flanery reminds us of the darkness that lives within all of us.

The unpredictable end surprised me. And still, we’re left to ponder the novel’s dark wisdom, “Truth may be beautiful but it lacks the artistry of lies.” Indeed it does.

Donya Currie is a journalist, fiction writer, and the web manager for a nonprofit organization in Washington, DC.