Back to Back: A Novel

A brother and sister grow up in tumultuous 1950s Germany. 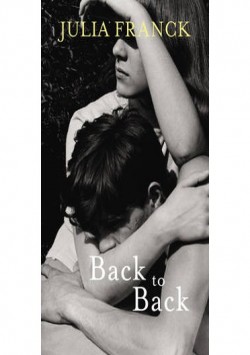 The majority of their family fled Germany to escape Hitler or Stalin, so the children live alone with their mother, Käthe, and a lodger called (but not named) Ulrich. Käthe is a sculptor, a Party true-believer, and a domestic tyrant who alternately exploits and neglects her children, denying them love and treating them with cruel disdain. Ulrich is believed to be an agent for the Stasi — thus the pseudonym.

The first half of the book is designed like a collection of short stories, each chapter dedicated to an awful event from Thomas and Ella’s childhood: there is the time they are left completely unattended for days without enough food, and decide to clean the house to please the absent Käthe. She eventually returns but doesn’t notice their hard work, berating them instead for picking flowers from the garden. Finally tired of being ignored, the children run away. They return half-drowned days later to find Käthe hasn’t noticed their absence.

In a later chapter, Ulrich rapes Ella; she brutalizes herself to induce a miscarriage. Käthe remains oblivious to it all, thinking only of her work. She makes Thomas pose nude for hours in the cold, not even allowed to wear socks when she is sculpting his head, yelling at him for trying to dress when guests arrive, and again a few minutes later for standing around naked in front of them.

When Thomas completes secondary school, Käthe insists he spend time performing manual labor to prove his revolutionary spirit — something she herself has never done. Thomas wants to study journalism (Käthe mocks the idea) almost as much as he wants to leave the GDR, but an inexplicable love for his mother prevents him from acting until it is too late — when the Berlin Wall goes up, escape becomes almost impossible. At his job in a quarry he is tortured by colleagues and superiors alike: they urinate in his drinking water, force him to work naked, and deny him food, before demanding sexual favors; he is saved from this only by contracting shingles.

The second half of the book finds a more sustained narrative. Recovered from his illness, Thomas is a hospital orderly, the price of entry to medical school — a path chosen for him, of course, by Käthe. He meets a nurse, Marie, who is also a victim: her husband pimps her to his friends. The two fall in love, and theirs is the story that ties the last chapters together. Ella’s experiences are still recounted, but in a manner both episodic and sporadic, denied any chance to evolve; the emphasis is elsewhere.

While the couple’s attempts at happiness form the novel’s most powerful section, inevitable failure hanging over the endeavor like a guillotine, the change in focus and subsequent imbalance between the siblings simultaneously highlights the book’s greatest weakness: that it is otherwise a world of straw-men and disposable effects. The fearsome Ulrich, for example, disappears for the length of a Bible; his absence has no consequence, demonstrating the extent to which his role lacks significance. In the long term nothing comes of Ella’s rape and miscarriage, either, which are thus reduced to mere marks on the victimization checklist.

The book’s publicity materials quote reviews apparently chosen to suggest that art about those who suffered is inherently good. At its most extreme, this approach would redefine as values the novel’s very deficits: if the story doesn’t evolve, it is because repression stifles evolution; the characters are flat because Communism has flattened them; events fail to hang together cohesively because totalitarianism undermines all cohesion. To ask for more is to deny these truths, to trample the dead.

To present this as a strength, however, is a failure of imagination. Think how the perfectly rounded and believable Kate Croy enacts the hidden cruelties of the class system in James’s The Wings of the Dove, or the characters in Conrad’s Heart of Darkness perform all the terrible roles of colonialism — including setting severed heads on spikes — without ever appearing two-dimensional. In Light in August, Faulkner gives us two fully-fleshed monsters (murderous criminal Joe Christmas and his lynch-mobster grandfather, Doc Hines) to epitomize all the horrors of slavery, folding back the leaves of atrocity to show its roots, tangled and complex, without ever limiting plot or character.

Writing thoughtfully about cruel people does not demonstrate an acceptance of cruelty; quite the reverse is true. The authorial decision to flatten characters — reducing their humanity — ultimately obscures the human origins of the system in which they live, precisely when totalitarianism, no less than slavery or colonialism, is the product of human behaviour. To make the ill we do to one another appear the random effect of force majeure is to let those responsible off scot-free — surely the opposite of what Julia Franck had in mind writing this book.

Tadzio Koelb regularly reviews art and fiction for a number of publications including The New York Times and The Times Literary Supplement.

We, the Survivors: A Novel

A third-world tale starkly relevant to our own plight today.