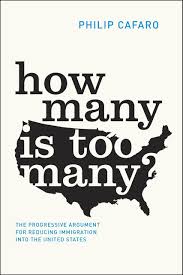 Say “immigration controversy,” and any consumer of news will assume you mean the deafening dispute over treatment of undocumented aliens. To Philip Cafaro, that is a sideshow. The real issue, he argues in How Many Is Too Many? is the size and composition of the entire immigrant influx.

With provocative brio, Cafaro advocates a reduction of more than two-thirds in the number admitted legally, to 300,000. He wants to overhaul the admission criteria, making it more difficult to game the system.

He would discourage new illegals by serious application of status-verification technology as a prerequisite for employment and harsh penalties — including prison terms — for business owners who knowingly hire the undocumented.

Absent such dramatic steps, the author warns, income inequality will worsen, and prospects for upward mobility diminish further. African Americans will be among the main victims.

If total immigration remains at its present rate of roughly 1.5 million annually, the U.S. population will increase from 320 million to about 440 million in 2050, according to expert projections.

Cafaro contends that would be ruinous both to working-class Americans and the environment. And just a slight rise in immigration would ratchet up overall population significantly; recent arrivals have a higher birthrate than their counterparts in home countries.

Hold on, many readers will object. Robust immigration, we’re told by all except the neo-Know-Nothing fringe, produces economic growth. And absent immigration, the population would grow only slightly because the fertility rate among Americans now barely reaches replacement level.

To which Cafaro responds: exactly, and bravo! At this stage of America’s evolution, economic growth as generally understood is a trap.

It is “environmentally toxic,” for starters, he says. Economic expansion and growing consumption serve the short-term interests of business owners and others among the affluent, not those in the lower strata. In the longer term, strong population growth will propel all classes in many countries into the soup of accelerated global warming. Again, the poor will suffer first and most.

“We need to figure out,” Cafaro says, “how to create flourishing, just societies that do not depend on economic growth.” In the temple of conventional wisdom, Cafaro is a proud heretic.

To those who maintain that the U.S. has a moral obligation to continue living up to the 19th- century poem inscribed on Lady Liberty (“Give me your tired, your poor, your huddled masses…”), Cafaro has a 21st-century response: “We have no right to pursue immigration policies that sacrifice the vital economic interests of poor Americans in order to help poor foreigners.”

The author is neither a demographer nor an economist. Rather, he is a philosophy professor at Colorado State University and president of the International Society of Environmental Ethics. Cafaro is also a lifelong green activist. He repeatedly calls himself a progressive. But on the issue of population growth, he is a throwback to those ultra-liberals of the 1960s who rallied around Paul Ehrlich’s alarum, The Population Bomb.

Just three years before that book appeared in 1968, the U.S. adopted sweeping changes to immigration. The impetus was also liberal — to make admission criteria more equitable in ethnic terms — increasing the proportion of newcomers from poorer countries at the expense of quotas for citizens of northern European nations. A new Democratic senator from Massachusetts, Edward Kennedy, echoed the consensus when he asserted that the aggregate number of immigrants would “remain substantially the same.”

Dead wrong. The “family reunification” waiver, favoring relatives of those already here, and other provisions with unintended consequences, more than tripled legal immigration, which had previously been running at about 300,000 annually.

The U.S. now willingly admits more immigrants than any other country. And unlike some advanced economies such as Canada and Australia, it imposes no skill or education requirements on most of those granted visas. Mexico has become the largest source of newcomers.

The influx of unskilled and semi-skilled labor increased competition for downscale jobs. It gradually depressed wages and benefits in some industries, such as meatpacking, landscaping, and construction. Labor unions suffered as a result, further diminishing the bargaining power of those groping for footing on the economic ladder’s lower rungs.

Cafaro marshals ample data to support the general argument that the present immigration hodgepodge works to the disadvantage of the least-affluent Americans. And he fully supports his contention that leading environmental advocacy groups, such as the Sierra Club, deserted their 1960s opposition to large-scale immigration not on the merits of the issue, but on its politics. They feared being perceived as elitists unconcerned about needy folks south of the border.

Cafaro’s argument has its vulnerabilities. He does not take into account outsourcing as an important factor in reducing living standards for American workers. Further, stabilizing America’s population means proportionately expanding its aged segment — fewer working-age folks supporting still more geezers on Medicare and Social Security. Cafaro favors higher benefits for the needy of all ages, to be paid for by significantly higher taxes on the affluent. He is silent on how to create the political climate for that change.

Cafaro also suggests that the U.S., by changing its foreign-assistance programs and trade policies, can encourage job creation in developing countries. This implies more generosity and dexterity than the U.S. seems able to muster.

Cutting down immigration might well decrease the pace of development that threatens the American rivers and green spaces about which Cafaro waxes poetic. But that does not alter the rapid increase in global population, which will go on apace, along with accelerating development in Africa, south Asia, and Latin America. So even radical changes in immigration quotas will have little impact on global warming.

Regardless of how one assesses the components of Cafaro’s argument, How Many Is Too Many? deserves a wide audience. It provides a concise, coherent history of U.S. immigration policy. It amply demonstrates that our dysfunctional system is the product of unintended consequences. And it should provoke sober thought about where we go from here.

During four decades in journalism, initially with the New York Herald Tribune and later with TIME magazine, Laurence I. Barrett covered city, state, and national affairs. He is author of The Mayor of New York and Gambling with History: Reagan in the White House and co-author of The Winning of the White House 1988.