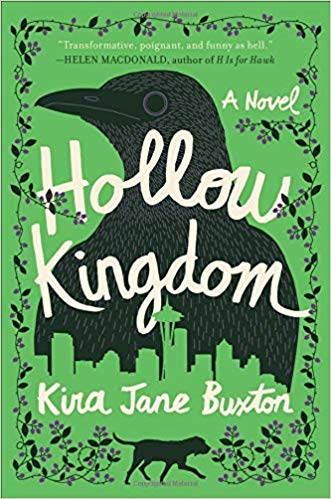 In Kira Jane Buxton’s Hollow Kingdom, the Hollows are the humans. Thusly named (by the actual fauna of the Earth) for the fact that they go around wrecking the environment like "milky-eyed machines intent on destruction, empty vessels that have lost their inner intelligence." A fair assessment, indeed. And that's before the entire human race is turned into zombies.

Buxton's novel is at its heart a standard apocalypse tale. But the twist here is that the story of humanity's downfall is narrated by the animals left behind. Most notably by a foul-mouthed domesticated crow named Shit Turd. Or S.T. for short.

S.T.'s worldview is colored by his owner, Big Jim, a Seattle resident with an affinity for cursing, Big Butts magazine, Tinder hookups, and — now that he's a zombie — standing in a room and scratching at the wall. With the help of their lovable hound Dennis, S.T. sets out to save Big Jim and, perhaps, all of humanity.

I was skeptical going in, because I wasn't sure if I'd ever be able to relate to a domesticated crow. There was also this nagging feeling that Hollow Kingdom just couldn't possibly work. I mean, how could it? A trash-talking crow? Zombies? All wrapped in social commentary and an environmentalist slant? No way.

But, against all odds, Buxton pulls it off.

First of all, the book is very funny. At times, I'd even whip out the word hilarious, which I don't do very often. And Buxton really knows her animals. I can't count the number of times I said things to my wife like, "In this book, the cats call their owners mediocre servants!" Then we looked at our cats, who glared critically back at us.

But the real trick is how invested we become in S.T.'s quest. With the loss of Big Jim, the only world that S.T. has ever known is yanked away from him. Domesticated animals no longer exist if there is no one to domesticate them. His immersion into the natural world beyond his Seattle home is terrifying and poignant and, of course, packed with the kind of experiences that will make him a better person. (Er, I mean, crow.)

When S.T. and Dennis, the most endearing sidekick ever, decide to rescue the other domesticated animals trapped in their homes, I was all in. But Buxton isn't done there. She layers in a whole world for S.T. to discover, where animals chatter to each other through Aura, a kind of animal Internet.

And we meet rival murders of crows and the strange new predators who have escaped from the zoo. We watch in awe as the natural world begins to bulldoze over the memory of humans. But that is a bridge too far for S.T. He loves Big Jim. He loves humans. His most pressing mission becomes ensuring that the Hollows are not forgotten.

The second half of the book is taken over by the arrival of The One Who Conquers, an imminent threat to S.T. and the animals he has met and rescued along the way. By then, some of the thrill had worn off for me, but when an injured S.T. climbs onto the back of an eagle and exclaims, "Eagles are majestic as fuck!" I remembered what made this book so magical.

It wasn't just the funny lines; it was the palpable sense of despair and wonder and excitement that S.T. experiences along the way. At its core, Hollow Kingdom is about S.T. struggling with his identity and his place in this new world.

Hold on, though. Have I adequately stated my love of Dennis the dog? He is, by far, my favorite character in the novel and he never utters a word. His commitment to who he is, amid colossal upheaval, is admirable. His loyalty to S.T. never falters even when he needs to take frequent breaks to leave his scent on trees and lick himself.

With dry and cracked paws, he stands up to tigers and bears and never flinches no matter how crazy S.T.'s plans may be. But the most powerful thing he does is facilitate a change in one hard-headed domesticated crow.

For S.T., Dennis starts the journey as a holdover from their old life. A reminder. But over the course of their quest, he becomes so much more. Without Dennis, S.T. would never have the gumption to lead thousands of animals into a battle for their lives.

And that is the final trick of the novel and why it is so successful: It is real. It doesn't matter that the plot is populated with crows and dogs and cats. We can see ourselves in them. Despite its grim apocalyptic proclamations, Hollow Kingdom remains joyously hopeful. S.T.’s quest to find himself is a statement on loyalty and resilience: or, as we Hollows would call it, being human.

Josh Denslow is the author of the collection Not Everyone Is Special, which arrived in early 2019 from 7.13 Books.