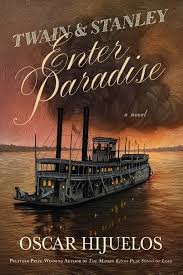 In 1858, Samuel Clemens, then a boat pilot, got into a fistfight on a Mississippi riverboat. He was defending his younger brother, Henry, and the captain rewarded him for his gallantry by kicking Sam off the boat to work on another. But before either vessel reached its destination, Henry’s exploded. Henry died in Memphis with his agonized brother by his side.

That much we know, according to Samuel Clemens’ own words. And in Oscar Hijuelos’ telling, or one character’s version of it, the young writer’s sadness sparked an affinity for another itinerant young man, Henry Morton Stanley. Stanley tells us that he met the still-mourning Clemens on another Mississippi riverboat, and their shared love for books, combined with the eponymous echo of Clemens’ departed brother, sparks a lifelong friendship.

Clemens later tells us that this Morton’s version isn’t quite true, but it’s close enough. Such is the changeable nature of memory, Hijuelos suggests. In any case, the novel follows their relationship, largely through Stanley’s eyes, over the course of their eventful lives. Stanley transforms himself from an orphaned Welsh boy to a world-famous explorer (of the “Dr. Livingstone, I presume?” fame) and successful memoirist, while Clemens morphs into Mark Twain and a committed family man.

Stanley’s journey is dogged by illness, including debilitating bouts of recurring malaria, and a self-consciousness that shackles him to his prickly honor. He has few close friends except Twain and, later, his beloved wife, Dolly. What joy Stanley finds comes in those rare moments when he lets his guard down or when he reads.

His paradise is elusive, and as the end of his life bears down upon him, the old man battles his regrets. He dies by telling his wife, “I want to go home.” Just where Stanley’s home lies is unclear, though Hijuelos gives Dolly the final word. At the twilight of her own life, she imagines both Stanley and Twain entering Paradise together.

Twain & Stanley Enter Paradise is Hijuelos’ last novel, published posthumously after his sudden death at the age of 62. As his wife writes in the beautiful afterword, he had been revising the manuscript only the day before he died. And though his passing was unexpected, it seems fitting that this book was his last. The novel is filled with musings about the value of a life, the possibility of afterlife, and the role of art and literature as humanity’s consolation.

“What is literature but the record of men’s lives?” Stanley asks in a public address. “Our literature is our legacy, and if there is such a thing as ghosts, literature will be the only verifiable version of them.” It’s not hard to imagine Hijuelos making the same argument.

The pervasiveness of such arguments is, perhaps, one of the weaknesses of this fine novel. There is little in the way of plot tension, particularly as the initial narrative questions are answered at the outset: Clemens will become friends with Stanley, Stanley will marry Dorothy, and they will all die. The frenetic energy of Hijuelos’ The Mambo Kings Play Songs of Love is absent here. This novel is, more than anything, a book of ideas. How do we find Paradise? Why do our memories slip away or resurface? And how do we live life knowing it will end?

We all die. And though historical fiction can give us the illusion of resurrection, suggesting we readers can re-invigorate a historical figure’s experience, all we really have is mystery. As Stanley told his spiritualist wife, “I’ll find out soon enough, won’t I?” But that discovery is endlessly singular, never to be shared.

This meditative novel reminds us, however, that we still have much that can be shared. Foremost is friendship born of shared experience and common sympathies. I imagine Hijuelos felt himself friends, across time, with his subjects. He worked on the manuscript for 12 years, and I think he meant it to be, as he wrote, a “reminder that there [is] something noble and beautiful and deeply human about literature.” This novel is a tribute to that sentiment.

Carrie Callaghan is a senior editor with the Washington Independent Review of Books. Her short fiction has appeared in Silk Road, Floodwall, the MacGuffin, and elsewhere. Follow her on Twitter at @carriecallaghan.