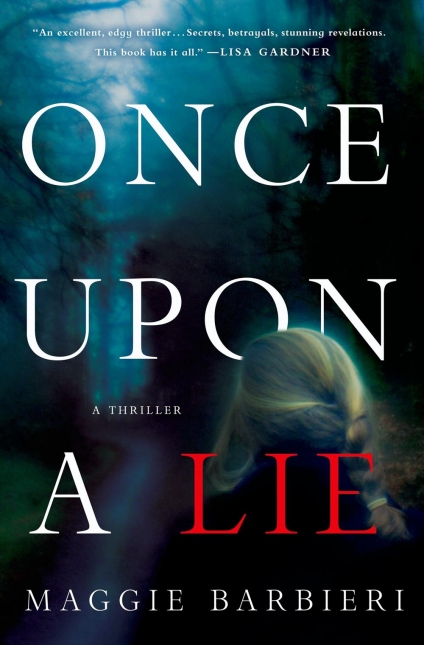 Maggie Barbieri is known for the Murder 101 amateur sleuth mystery series, but in Once Upon a Lie she ventures into darker territory to write about the lies some families tell to preserve an outwardly perfect image. Like all the best crime fiction, it forces readers to ask themselves uncomfortable questions: How far would I go to protect my family? How much could I overlook just to keep the peace? How much injury, to myself or a loved one, could I endure before I started thinking about revenge?

Maeve Conlon is struggling to keep her bakery business afloat, look after her father as he succumbs to Alzheimer’s, and raise two teenage daughters after her husband decides he’d rather be married to one of Maeve’s friends. The ex-spouse is still around, showing up at the girls’ school and sporting events with his infant son strapped to his chest, regarding Maeve with pity and making her feel like a loser. She wants him to believe she’s doing just fine without him, and she tells him the sort of harmless lies that are designed to save face but that leave an ache in the heart of the liar.

After her cousin Sean is murdered, Maeve allots 17 minutes out of her busy day to pay her respects at his noisy Irish wake. She and her older cousin had a poisonous relationship, and she’d like nothing better than to forget about him. But when Maeve learns that her father is suspected of committing the murder when he wandered away from his assisted-living facility, she feels compelled to clear him. With a sad-eyed detective named Poole hanging around, prying into the family’s secrets, Maeve scrambles to construct an alibi for her father from his unreliable memories.

At the same time, Maeve suspects spouse and child abuse in a family that hires her to bake for a little girl’s birthday party. When an attempt to report the abuse to “the proper authorities” fails, she does what most people would never consider: she goes after the abusive husband and father, letting him know she’s aware of his monstrous acts and threatening to expose him, or worse, if he doesn’t reform. As Maeve’s history with Sean is revealed, her zealous pursuit of the abuser in the face of official indifference becomes not only understandable but, in its own twisted way, noble.

This well-paced story weaves the ever-darkening aspects of Maeve’s secret life into her ordinary days and nights, building a contrast that is creepier and more profoundly disturbing than an action-packed, thrill-a-minute approach could ever be. Maeve is a complex character, a businesswoman, a loving mother and daughter, a matchmaker for a divorced friend, but also a survivor shaped by traumatic experiences that no one in her family seemed to notice or care about. The people around her are vivid and believable, most of them anchored in mundane reality as they move through a horror story but some, such as Detective Poole, revealing unsuspected depths.

Barbieri displays an unflinching insight into the lasting damage families do to their most vulnerable members by looking the other way and avoiding the unpleasant repercussions of protecting them. The conclusion is the kind of stunner that will have readers debating right and wrong and the true meaning of justice.

Once Upon a Lie, the beginning of a new series,is an excellent example of the so-called domestic thriller, a beautifully executed tale of dark secrets and revenge within a seemingly ordinary American family.

Sandra Parshall is the author of the award-winning Rachel Goddard suspense novels, set in Virginia. Her latest title is Bleeding Through. Her next book, Poisoned Ground, will be published in March 2014. She lives in Northern Virginia.

Arizona Moon: A Novel of Vietnam

An action-packed story that peers into the culture of Marine combat.