Hold the Dark: A Novel

A harshly beautiful setting and recurring wolf motif give this mystery a real bite. 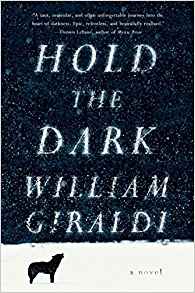 “The dead don’t haunt the living. The living haunt themselves.” William Giraldi’s new novel, Hold the Dark, is a meditation on betrayal, nature, violence, and death. The unexplainable terrors of our lives haunt this piercing tale of revenge.

Keelut is a small, dwindling village on the edge of the brutal Alaskan wilderness. Three children — one of them the son of Medora Slone — have been snatched by wolves. Slone contacts a wolf expert, Russell Core, who arrives in town at the beginning of winter to investigate the killings.

Her husband, Vernon, returns home from a desert war and learns that his son is dead and his wife has disappeared. He sets off on a search for Medora, while police detective Donald Marium pursues them both through a snowy landscape of mystery and violence.

Hold the Dark takes a few sharp turns early on, but once Vernon Slone arrives, the plot gets moving, and fast. Vernon is reminiscent of Anton Chigurh from Cormac McCarthy’s No Country for Old Men. Both characters embody a ruthless violence and personify the inevitability of death.

However, Vernon differs by having a wife and son who add a dimension of humanness to him. He also slowly changes throughout the novel, becoming more disconnected from everything around him, isolated like the town from which he hails.

Similarly, Donald Marium might remind readers of Sheriff Ed Tom Bell from No Country for Old Men. Both officers are faced with a level of violence they cannot comprehend and are not psychologically prepared for.

Again, though, Giraldi sets his character apart from McCarthy’s by placing Marium in a high-stakes shootout that is rendered in precise and exhilarating language. Readers learn about the detective through his actions, as opposed to self-narration.

The character of Russell Core is more contemplative and introspective than the other two men, but his relation to the novel’s main plot is tenuous. His concern for Medora bookends the narrative, with the main story occurring in his absence. Toward the end, he plays a more functional role in the plot’s unfolding, but readers might be frustrated with his convenient arrival whenever needed.

The language throughout highlights the harsh violence these characters inflict on each other. A stab wound is a “coin slot,” and sprayed blood is “wisps of orange and red.” After the shootout, Marium looks down at his shoes: “He could see the snow melting pink beneath his boots, ice pellets of blood crammed in the soles.”

For the most part, these descriptions enhance the world that Giraldi describes. Likewise, the dialogue is all its own: “‘I don’t tell the weather, Mr. Core. It will tell me.” At times, these types of lines feel almost too written, but mostly they feel authentic, especially when characters use regional slang: the springtime thaw is known as “the breakup,” and people from the mainland United States are called “forty-eighters.”

The setting in Hold the Dark is pivotal to the novel’s tone and mood, and it heightens the scenes of violence: “The dead had been frozen, stuck to the ground by their blood and entrails. They had to be scraped off the earth with shovels, or else pried up with pickaxes.”

The danger of the wilderness, the freezing snow, and the feral wildlife provide Giraldi with plenty of details to work with, but his focus on wolves is most noticeable.

At nearly every opportunity, the author employs the symbol of the wolf, but sometimes the relationship between the animal and the narrative is unclear: “Family members of police paced the hospital hallways, unsure who was living and who not. Some spouses wailed, wolflike, when news reached them.”

This might seem like a fine description of the timbre of the sobs, but it is one of dozens of evocations in the book of the wolf as a symbol. When describing wearing a handmade mask, one character says, “It releases the wolf in you, boy. The wolf we all have in us.”

Even the town of the novel is named Keelut, which is an Inuit word for an evil spirit that resembles a hairless dog. The role of the wolf in Hold the Dark seems multifaceted, and some readers will love the repeated symbol, how it builds an atmosphere of mysticism and danger; others might find it unclear in a fickle, noncommittal way.

The symbol of the wolf and the attention to violence seem to suggest a mercurial theme of existential nihilism, but this is only hinted at in small phrases of dialogue like, “Kill your god and you become your god” and “Nothing happens here in a way that makes any sense.”

Searching for the meaning in symbols might be the exact type of exercise Giraldi is suggesting is futile. After all, the violence and death in this book are meaningless, so any reader’s attempt to impose meaning onto it will be met with a cold, harsh, nihilistic nothingness.

Hold the Dark is a mystery novel with all the right ingredients: tough characters, beautifully dangerous landscapes, revenge, a detective on the chase, a husband going after his wife, and enough bullet casings to rattle in the mind long after the story is finished.

Nathan Blanchard is an MFA candidate in the creative writing program at the University of Alabama in Tuscaloosa. Hailing from DC and Baltimore, his work has appeared in Atticus Review, District Lines, and McSweeney’s Internet Tendency. He enjoys eating at Mexican restaurants with his wife.