An elite group of Allies struggles to stay alive behind Axis lines in the waning weeks of battle. 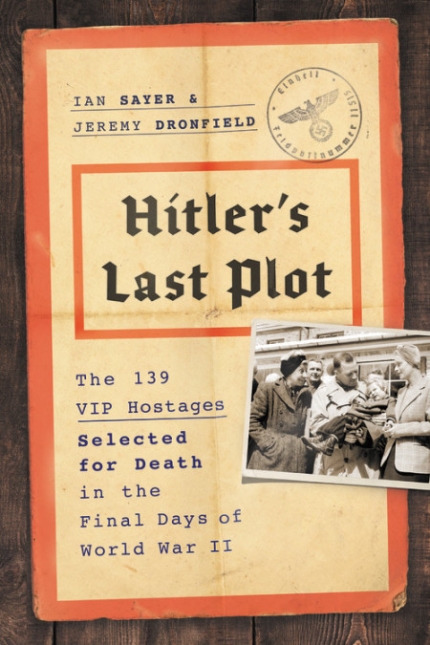 Most of us know the brutal basics of World War II: Hitler’s disturbing, meteoric rise to power using a fledgling nation’s struggling economy as a campaign tool. His subsequent attempts at military expansion and commission of genocide and additional mass murder. And his ignominious end in the Reich chancellery when it became clear that defeat was close at hand.

But fewer of us may know of a parallel story occurring during those final months of the war — a story involving many and varied characters whose fate, though it might not have been clear to them at the time, was tied to the Führer’s own. In Hitler’s Last Plot: The 139 VIP Hostages Selected for Death in the Final Days of World War II, Ian Sayer and Jeremy Dronfield tell that story to great effect.

The hostages, or Prominenten, around whom the book revolves comprise former leaders of conquered countries, members of the Resistance, high-ranking Allied military personnel who have been captured, and family members of famous anti-Nazi plotters such as Claus von Stauffenberg. They are a motley bunch, including men of faith, audacious escape artists, and even a prominent Nazi death camp experimenter only there because he has been accused of financial fraud.

By the early spring of 1945, it’s clear the Allies are winning the war. The Nazis hope to use the Prominenten, literally “prominent ones,” for one of two purposes: either as bargaining chips for spared Nazi lives or as retribution for spilled Nazi blood. But first, they must corral them all in one location — a feat easier said than done.

The Prominenten were held at several concentration camps, including Sachsenhausen, Buchenwald, and the lesser-known Flossenbürg. It may surprise some readers to learn that they were treated with relative respect, some (notably two wives of former heads of state) even coming and going as they pleased because they were prisoners by choice.

Kurt von Schuschnigg, former chancellor of Austria, and his wife, Vera, even had a child, Sissy, in captivity, though her childhood was inevitably stunted. When the family was being moved from one camp to another, report the authors:

“[L]ittle Sissy was at the end of her tether, tearful and irritable, demanding to know when they would reach their destination. ‘Is it a nice prison we’re going to, Mummy?’ she asked over and over, begging to know why they couldn’t go back to their nice house at Sachsenhausen. The poor child had never known anything but concentration camps.”

Sayer and Dronfield do a terrific job coloring in the backstories of the Prominenten, but the majority of the book is taken up by descriptions of the travels between camps as the Nazis scramble desperately to round up their increasingly unruly prisoners. These journeys are harrowing experiences; the frayed Nazi nerves combine with the frantic machinations of prisoners who know they could be executed at any moment to create an atmosphere of almost unbearable tension.

Once the Prominenten are corralled, though, begins their true journey — though their destination is unknown. Fascinatingly, the longer they are kept in captivity, moved about like chess pieces on the world’s board, the more assertive they become, some former military members even hatching plans of insurrection or forming partisan alliances in plain sight of their guards.

One of the most surreal scenes in a book full of surreal scenes occurs when some of the more martial-minded prisoners request a meeting with their main guard, Edgar Stiller. The war is at its tipping point, they tell him, and “We have heard a lot of rumours which seem to indicate that…plans are afoot to liquidate the whole lot of us.”

When Stiller demurs, Sigismund Payne Best, a British Secret Intelligence Service agent, tells him, “We most certainly are not going to allow you or anyone else to murder us. We have therefore decided that I shall take over command from you.” Instead of shooting him on the spot, Stiller “recovered from his shock and gave his agreement.”

Although it might be thought this bargain would relieve the prisoners’ — now officially escapees’ — minds, Sayer and Dronfield emphasize that the Prominenten are still in great danger. Accompanying Stiller is a contingent of militant Nazis who are becoming increasingly aware of the tenuousness of their position.

Armed to the teeth, they would be only too happy for any excuse to shoot the captives, believing themselves to be doomed regardless. Thus begins a tense standoff that will have readers turning pages at a record rate until they reach the denouement.

For any World War II buff, Hitler’s Last Plot is a must-read. But anyone who enjoys a good old-fashioned adventure tale will love it, too.

Mariko Hewer is a freelance editor and writer who works as a communications specialist at a global health nonprofit to support her beagle’s expensive kibble habit. She is passionate about good books, good food, and good company. Find her occasional insights of varying quality at @hapahaiku.