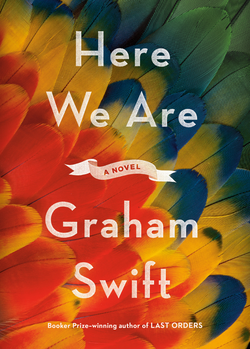 Begin with a trio of magicians. Shape them into a love triangle. Watch everyone twist and turn. Then throw in a parrot and an epigraph from Joni Mitchell’s “Both Sides, Now” (“It’s life’s illusions I recall…”).

What do you get? A lot of smoke and mirrors and supple narrative prestidigitation from Booker Prize-winner Graham Swift in the form of the bittersweet Here We Are.

The engaging novel starts in Brighton, England, in August 1959, at the end of the famous pier, a “flimsy structure over swimming water.” Despite what might be read as an appropriate metaphor for the life of 28-year-old Jack Robinson, there is nothing flimsy about the storyline that begins with his history.

The master of ceremonies for a seaside variety show, Jack is in the wings (he often seems to be in the wings or offstage) waiting to introduce the top of the bill, Ronnie Deanes and Evie White (an act known as the Great Pablo and Eve). It was Jack who brought them together and drove them apart.

Before that, though, Swift subtly glides into Jack’s backstory, which explains how he became the master showman who created the most popular attraction at the summer resort.

He was already a seasoned entertainer, “twelve years on stage, except for a year and a half in the army.” While in the service, he met Ronnie. Both conscripted, it was their duty to “guard and defend at all costs the Royal Corps of Signals’ Filing System.” Having listed their civilian occupations as “comedian” (Jack) and “magician” (Ronnie), they entertained fellow soldiers with impersonations and card tricks.

After their short military stint, they became an “ill-fated double act.” The duo has an “amicable split,” Jack advancing in a solo career as a comedian-cum-song-and-dance man. Ronnie struggles as a magician until Jack scores the Brighton gig and invites him to join the show. With one proviso: “Get yourself an assistant.”

That turns out to be the glamourous 25-year-old Evie. She has “the legs, the looks, the smile.” She is “it,” except for one thing — she can’t sing.

Before the author unites the trio, however, the narrative takes an unexpected left turn to flash back to a long sequence that explains how Ronnie became a magician in the first place. In 1939, as an 8-year-old evacuee from London during the Blitz, he is taken in by Eric and Penelope Lawrence, a childless couple who live outside of Oxford in a house named Evergrene. And, for Ronnie, that is what it is.

Leaving behind a simple upbringing, he becomes exposed to the “exotic wonders” of the country house, with its separate rooms, garage, car, greenhouse, and telephone. His life is “bloody fantastic,” never more so than when he is instilled with a “curious sense of discovery and initiation.”

He also learns from Eric (aka the “accomplished magician” Lorenzo) the primary lesson of magic: “It could bring about extraordinary transformations, but not alter the fundamentals of life.” Something he realizes later in a most painful way.

Quickly advancing to become a “sorcerer’s apprentice” by age 14 and the end of the war, Ronnie has been completely charmed by his “privileged existence,” during which he develops his skills of diverting an audience’s attention so they don’t see how the magician’s rabbits disappear and reappear.

Then, just as quickly, Swift diverts the reader’s attention from Ronnie and circles back to the third side of the triangle, Evie. Hired as Ronnie’s assistant, she knows, having been a chorus girl, that she functions only as a diversion, her sequins and plumes distracting the audience while Ronnie carries off his tricks. That includes the classic sawing of a woman in half — just as Evie seems split, belonging half to Jack and half to Ronnie.

Soon enough, Ronnie and Evie are an item. They become engaged. Newspapers tout them as the most amazing act around, especially their “famous finale,” a rainbow trick that involves a white dove and a disappearing silk rope. But that is not enough. There must be a BIG FINISH.

But Swift isn’t finished with them, either; he doesn’t end the story of the ill-fated love triangle in 1959. Instead, he rejoins Evie in 2009, when she is 75, giving the reader (like the magician’s audience) a little something more, something they wanted even though they didn’t know it.

Here We Are closes with a rather ambiguous ending, perhaps leaving the reader to ask, “But, where are we?” Nevertheless, it is a hearty, invigorating read.