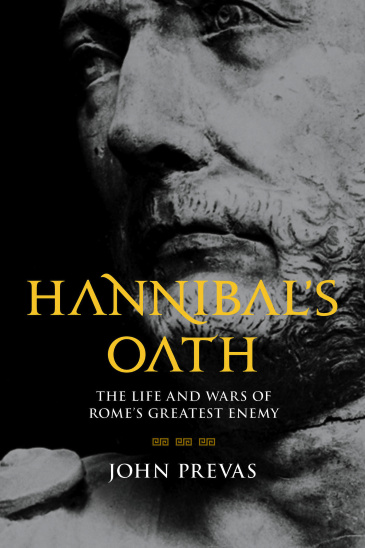 Over 2,000 years ago, in what is now Tunisia, a 9-year-old boy stood at the altar of his father’s god, laid his hand upon a sacrificial victim, and swore never to be a friend to the Romans.

That boy, living in the glittering coastal city of Qart Hadasht — or Carthage — grew into Hannibal Barca, a man who would dedicate the remainder of his life to waging war against the Romans. His name would stir horror and admiration even thousands of years later.

In Hannibal’s Oath, John Prevas gives us a concise, readable biography of the fascinating general. Hannibal stepped off that altar with his father, who had concluded Carthage’s first wars against Rome, and together they traveled to Carthage’s colonies in modern-day Spain. For 11 years, the senior Barca expanded and consolidated Carthage’s control of the local tribes. A few years after his father’s death, Hannibal, then 26, became the new commander and governor in Spain.

At that point, Prevas implies, war with Rome was simply a matter of time. Hannibal set his sights on the nominally independent, but Roman-allied, city of Saguntum, north of the Carthaginian-held territories. Though the envoys dispatched from Rome objected, Hannibal laid siege to the coastal town and prevailed.

But not before the aggressive young commander took a javelin to the leg and collapsed. The nearly fatal injury was a turning point in Hannibal’s leadership, Prevas argues. From then on, he grew to rely more on his cunning and strategy than his front-line bravery.

Indeed, it is Hannibal’s mind that earns admiration from military leaders today. Hannibal not only hurtled his forces across the brutal Alps to surprise the Romans by appearing early at their northern doorstep, but he orchestrated brilliant victories at the battles of Lake Trasimene (where he baited the Romans into a trap and slaughtered nearly 15,000 of them) and Cannae (where he encircled the Roman soldiers and killed at least 50,000).

He kept his army alive for nearly 16 years of warfare in hostile territory, all while bouncing from crisis to crisis. He terrified the Romans so deeply that, when he was a 64-year-old man, alone and in exile, they sent a team of assassins to find him.

Prevas offers some interesting analyses about this man who bedeviled the Romans but couldn’t defeat them. Hannibal’s daring rush over the Alps, he argues, is not an admirable feat of courage but rather a leadership failure. His army lost close to half its troops when hostile local tribes ambushed his forces, hurling rocks and spears upon men treading single-file along the mountain face. In Prevas’ convincing telling, Hannibal’s gambit sounds more foolish than brilliant.

But Prevas isn’t opposed to giving Hannibal credit where other historians have slighted him. One of the enduring mysteries of Hannibal’s war is why, after the crushing defeats he handed down at Lake Trasimene or Cannae, Hannibal did not lay siege to the city of Rome itself. Even Hannibal’s own lieutenant criticized the Carthaginian after Cannae, famously saying, “You know how to win, Hannibal, but not how to use a victory.”

Prevas, however, wisely suggests that observers misunderstood Hannibal’s goals. “His objective was to recalibrate the balance of power in Italy by substantially diminishing the influence of Rome,” he writes. Hannibal wasn’t aiming at a war of conquest. Rather, he wanted another rebalancing act in the centuries-long powerplay between the Mediterranean’s competing masters.

This book has much to recommend it — succinctness, helpful photographs of the author’s onsite reconnaissance, and a wise narrative instinct to abbreviate the latter half of Hannibal’s time in Rome, which were long, tedious years of cat-and-mouse.

But that instinct sometimes goes astray, which is a shame for a biography intended to be “something to be read and enjoyed, not studied,” according to the author’s preface. Analysis often precedes the telling of the historical story, as with a few battles and Hannibal’s course over the Alps. It’s deflating to read Prevas’ criticism before the reader has a chance to watch Hannibal’s freezing troops die on the rocky mountain slopes.

And though Prevas favors analysis over narrative at times, he gives short shrift to the analysis most important to a history shrouded in 2,000 years of distance: sources. It is not until more than halfway through the book that he mentions, in passing, the pro-Roman sympathies of Livy, one of the two ancient historians who provided most of the foundational texts for our knowledge of Hannibal. And nowhere does Prevas mention that Polybius, our other ancient source, preceded Livy by a century-and-a-half and had contact with Romans who fought against Hannibal.

This omission is probably because Prevas doesn’t want the reader to dwell on deciphering whose version of truth is the most reliable when, to some extent, all history is a constructed fiction. But his own obsessive reconstruction of Hannibal’s routes over the Alps and through Italy belies that intention. He believes in some truth, so why not give a nod to a couple of the prevailing mysteries?

Like that original oath, for example. The scene presented at the beginning of this review is actually the version from Polybius. In Prevas’ telling, young Hannibal stands in front of a huge iron furnace used in human sacrifice to the god Baal and swears he will always be an enemy of Rome.

Polybius says Hannibal watched his father sacrifice to Zeus — by which Polybius probably meant the Carthaginian god Melqart — and vowed never to be a friend. A fine distinction, perhaps, but for one of the most iconic scenes in Hannibalian lore, the reader deserves the opportunity to muse, at least in the footnotes, over the discrepancies.

As with any history, conclusive truth about Hannibal is impossible to attain. But an understanding, however insubstantial, is worth pursuing. Hannibal’s marks are all over our world, in our city names (Barcelona comes from “the camp of the Barcas,” and Sanguineto, Italy, is named after the bloodbath at Lake Trasimene), our military strategy (his “perfect” victory at Cannae), and our imagination.

Human behavior millennia ago doesn’t seem too distant from ours today once we start to see the modern echoes of Hannibal’s life. The bitter insistence of a defeated, but not humbled, Carthage to again wage war on Rome after the First Punic War, or the constant vacillation of Hannibal’s allies in Italy will sound tragically similar to the wars and diplomacy of the 20th and 21st centuries. Prevas’ book reminds us of that essential shared humanity, and his effort to reach back in time is a worthy one.

Carrie Callaghan misspent her 20s reading ancient military history. Her debut novel, A Light of Her Own (Amberjack), is forthcoming in November 2018. Her short fiction has appeared in Silk Road, Floodwall, the MacGuffin, the Mulberry Fork Review, and elsewhere. Find her on Twitter at @carriecallaghan or at www.carriecallaghan.com.