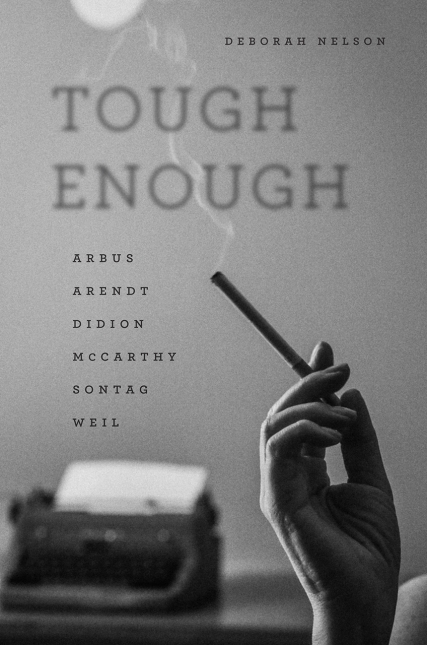 Toughness is a time-honored American value, one strongly associated with masculinity. In men, toughness can co-exist comfortably with other attributes — men can be "young toughs," or they can be old and tough; they may be praised as "tough but fair."

In women, toughness is considered somewhat unnatural, and calling a woman tough is not necessarily a compliment. Women are most likely to be lauded as tough when they lack stereotypically feminine qualities such as youth or beauty. In other words, when a woman is said to possess toughness, the unstated assumption is that she doesn't have much else going for her.

Deborah Nelson's examination of five 20th-century female writers and one photographer, looks deeply into their philosophies of un-sentimentality to discern the positive benefits of toughness — how it can enrich critical discourse and provide tools for individuals struggling with the pain of modern life. Her subjects (Simone Weil, Hannah Arendt, Mary McCarthy, Susan Sontag, Joan Didion, and Diane Arbus) all embrace toughness voluntarily, coming to it as a deliberate choice after lengthy reflection.

Nelson traces the common themes informing their choice: suffering, empathy, realism, and agency chief among them. Though these women share a background colored by mid-20th-century traumas like World War II, the Holocaust, Vietnam, and Watergate, and while some of them knew each other and even collaborated, they are not typically treated as a coherent critical movement. Nelson uses the lens of affect studies, with its focus on the interplay of mind and body, person and abstraction, to consider her subjects' collective "coldness and heartlessness" as a source of generative possibility.

Each of these artists has her own complex relationship to feminism (especially second-wave feminism). Nelson sees their work generally as a critique of feminism's use of emotion, pain, and utopianism. But gender also influenced their work from the outside: As Nelson points out, all six women were criticized for lacking compassion, while male authors who worked with similar themes and took similar positions on empathy and pain were rarely reproached for doing so.

Nelson's subjects are united by a disciplined, rigorous insistence on clarity; they see their own moral survival, and that of humankind, depending on honesty, unclouded by empathy or other emotions. Whether observing their own pain or others', they are obsessive about stripping emotional reaction from their response, and many critics were appalled by their insistence on this approach to suffering.

Arendt's use of irony in Eichmann in Jerusalem, her attempt to flatten the affective response inspired by the trial's horrors and allow objective analysis, was savaged as "heartless," "sneering," and "malicious."

American critics, confronting Weil's belief that "the greatest form of compassion is attention" — attention denuded of sympathy — felt compelled to point out her "harshness," to warn that "there was nothing kind or comfortable" about her theology, and to muse about whether her physical unattractiveness contributed to her dour outlook.

Yet, as Nelson ably demonstrates, these women's aesthetic choices, however outrageous to readers' feelings, produced important critical gains. Weil's painstaking work reveals the possibility of agency in the face of suffering. McCarthy's resolute embrace of unpredictability makes optimism available in a way it is not when we defer to statistical reality.

Sontag's critique of emotion in the arts builds a case for her claim that, as Nelson puts it, "art has a responsibility to shape consciousness by providing new sensations, not feelings." While their political goals varied, all six of these artists sought to solve the puzzle of suffering by refusing to flinch as they wrote. Their work helps us see, Nelson says, how to "make unsentimentality and its ethics available for use."

Nelson is primarily interested in the aesthetic, political, and philosophical concerns guiding the work these women produced; thus, Tough Enough is light on biographical detail, heavy on fine-grained stylistic analysis. Anyone who already admires Weil, Arendt, McCarthy, Sontag, Didion, or Arbus will no doubt appreciate this approach, and Nelson — obviously aware that most readers won't be familiar with all of her subjects — provides some context for each of them.

The constant repetition of themes, however, can make individual details hard to pick out, so while readers will come away from Nelson's analysis with a deeper understanding all six writers, they may still have a hard time telling them apart.

The book's dense academic prose also offers rough sledding at times, but for those who don't mind an occasional sentence like "I want to call this a res ipsa loquitur style of advocacy or admonition, which can slip perilously close to inscrutability when irony becomes unstable," the reward is a compelling new perspective on the age-old problem of pain and how we respond to it.

It is, Nelson posits, our unwillingness to be changed by knowledge that paralyzes us. The agreement she sees among her subjects is that "we should be changed, however much we give up in the process."

Susan Schorn writes Bitchslap, a column on women and fighting, for McSweeney's Internet Tendency, and is author of the memoir Smile at Strangers, and Other Lessons in the Art of Living Fearlessly (Houghton Mifflin Harcourt) as well as the short-story collection Small Heroes.