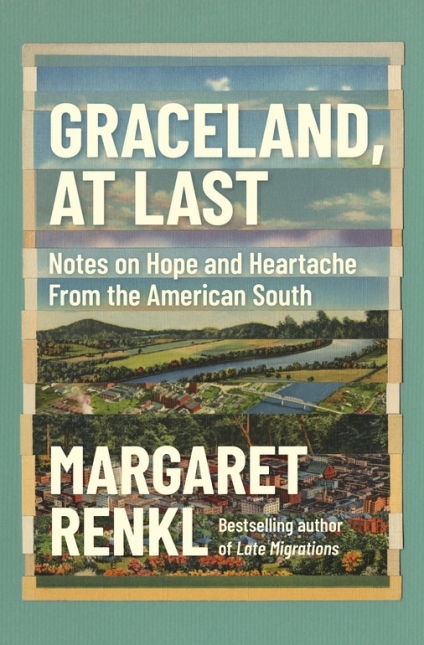 The essays in Margaret Renkl’s Graceland, at Last began in grief as the author mourned the deaths of her mother and mother-in-law and wrote to exorcise her misery. Eventually, she found her way to gratitude for the gift of life, which she celebrates in a weekly column for the New York Times about living in the South.

Born in Andalusia, Alabama, and now living in Nashville, Renkl honors the natural beauty of her lush roots while acknowledging the ravages of slavery still embedded in the terrain, which, she suggests, might be why the region “keeps giving birth to more than its fair share of writers.”

As a white Southerner, she’s a bit defensive (but graciously so) about the sin of the South, writing that slavery was not restricted to the Confederacy, but must also be owned by states such as Ohio, New Mexico, Illinois, Kansas, Pennsylvania, and Minnesota, all of which exacted torture and death on those they enslaved:

“The fact that the rest of the country shares in the South’s greatest moral failing doesn’t excuse our brutal history or the way its vestiges linger. But the South has always been more than its most appalling truths.”

So Renkl sets out to illustrate the assets and attributes of her region’s blood-stained soil, as well as its widely varied culture. Graceland, at Last begins with the South’s beauty. In these essays, Renkl rhapsodizes about Cooper’s hawks and blesses Broadhead skinks while delighting in the New Guinea Highland wild dog. From fauna she segues into flora, praising the purple Tennessee coneflower, “the star of the cedar glades of Middle Tennessee.”

In another offering, she travels to the delta to find the American lotus, not as intoxicating as the sumptuous lotuses that ensnared sailors in The Odyssey, but even Homer might bow to Renkl’s description of “the thousands of pale-yellow flowers rising on foot-high stalks, the petals of each bloom curling gently in the sun.”

Renkl introduces readers to some of her region’s progressive publications, too, such as Facing South, an online magazine of the Institute for Southern Studies in Durham, North Carolina; Scalawag, a nonprofit print and digital publication focused on Southern politics and culture, also based in Durham; and Southern Exposure, a journal with special emphasis on investigative journalism and oral history.

So far, this lovely little book is bright, courteous, and informative, even lady-like, but then Renkl ventures into territory that more timid Southerners would avoid: sex, religion, and politics. Here, she shows her soul as she lambasts the Tennessee legislature for its misbegotten attempts to amend the state constitution to prevent same-sex marriage, for denying birth certificates to babies born to undocumented parents, and for outlawing abortions after a fetal heartbeat can be detected, which is, Renkl writes, frequently before a woman even knows she’s pregnant.

In sharply crafted essays, she also upbraids the state she loves for its immoral array of tactics to undermine voting rights. She pillories Tennessee’s Republican legislators for refusing to expand Medicaid, which she condemns as an “act of cruelty.” She then lacerates them for their lax gun legislation:

“It’s easier to purchase an AR-15 in Tennessee than it is to become a licensed exotic dancer, as two employees of Déjà vu Showgirls, a Nashville strip club, demonstrated in a recent YouTube video.”

Renkl doesn’t seek to repeal the Second Amendment — she just wants guns out of the hands of psychopaths who shouldn’t have them. While she identifies as a Democrat in the red state, she praises Tennessee’s Republican governor, who commuted a prisoner’s life sentence and chose mercy and understanding over the strict letter of the law. “We may never agree on what real justice looks like,” she writes of that case, “but we will always know mercy when we see it. And mercy will do.”

As a “cradle Catholic” who became a “cafeteria Catholic” — picking and choosing which tenets of the religion to practice — Renkl supports a woman’s right to choose abortion. “No matter how you define it, protecting human life should never stop at the zygote.” She also writes essays supporting voting rights, immigration, affordable healthcare, and same-sex marriage. She abhors capital punishment and challenges “pro life Christians” who condemn “pro choice” advocates while still championing the electric chair.

Seeking reassurance in the unsure world of 2018, Renkl drove to Plains, Georgia, to attend Jimmy Carter’s Sunday school class at the Maranatha Baptist Church. “[He] still has faith in this country, and I hoped his Sunday school lesson might restore my faith, too.”

The former president, then 94, addressed more than 350 parishioners as he read from the Acts of the Apostles and discussed how the apostles worshiped together and took care of each other’s needs, an example for all of us to follow. Then Carter acknowledged: “We have lost faith in a lot of things that have always nurtured us.” Still, he continued, “I believe…that God’s love will prevail.”

His faith cheered Renkl, who left that morning feeling as if she’d attended “a master class in responsibility and goodness, and above all, love.”

As for the title of this book? Perhaps it’s a metaphor for a little girl who grew up in Tennessee yet, having lived there for decades and made numerous trips from Nashville to Memphis, had never made the pilgrimage to Graceland, home of Elvis Presley, and its walls and walls and walls of gold-encrusted mirrors. There, as an adult, in the midst of all those mirrors, Renkl saw herself as a woman — a wife to a beloved husband and the mother of three sons schooled and embarked on their own lives.