A new, unexpurgated volume of the author's diaries. 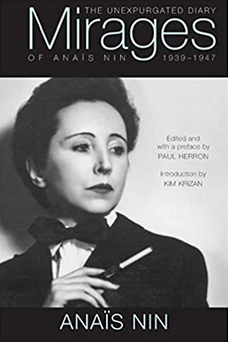 New York: the place that now seems coarse and unwelcoming. The cultural headquarters of barbarian America is not the ground best suited for your continued personal and artistic growth. Something is missing.

Something is always missing. In your journal, which you devote largely to your love affairs, what’s often missing is the ideal, transcendent union that you always, perhaps foolishly, seek. Your longtime lover Henry Miller follows you here. His coldness and rationality are quite at home in the U. S., but he is no longer the inspiration, soul mate, and passion center of your life. He has served his purpose, helping to verify your identity as a creative artist and an alluring woman. And he is growing old.

Hugo, your supportive husband whom you love without passion — whom you betray on an almost daily basis — has been noble in his selflessness. Still, he has been only a bank employee. What kind of mate is that? You encourage him to explore his artistic and passionate side — and he does. You steer him toward overcoming his inhibitions — and he makes progress. The reinvented Hugo becomes assertive, even demanding. He is no longer so malleable and obsequious. Anaïs, sorceress, what have you created?

Something is always missing, and when it finally shows itself, then something else is missing.

Poor Gonzalo More, your big bear of a lover, the lazy Peruvian Marxist who can never get anything done but can rise to the occasion in bed. The man enslaved by his always sickly wife. Is there a future here? Can he be the ultimate soul mate? He helps you work the letter press, and you name its imprint after him: Gemor Press.

If only these men, each with his own appeal and fatal attraction to you, could be combined into one perfect lover. Anaïs, when will you learn that ideals are only ideals? That illusions are meant to be broken. That dreams are preludes to wakefulness.

As you moan: “Oh, god, there is such a labyrinth of suffering from which I’m making superhuman efforts to escape. There is such sadness and fatigue at the struggle to gain freedom, reality and space, but what wonderful art is created out of it. I want to create the neurosis of our time. But I’m so sick of it.”

Each lover is the fulfillment of the dream for a while, maybe for several whiles, but each is also a mirage — an imaginary person your needs have created. And these mirages are getting old; your youthful self responds to them less and less. You have given them so much time, so much enchantment, invested so much in their perfectibility. And each of them has let you down.

What’s wrong with them? What’s wrong with you? Does Clement Staff, your most recent analyst, have the answers? Or is he, too, blinded by his infatuation, unable to see beyond your many veils?

Having turned 40, you now turn to men (boys?) half your age. You are their priestess. You understand what their parents don’t. You value their strivings. You initiate them into highly sexualized behavior and identities. Your body is a revolving door. Many of these youngsters are homosexuals, others are equivocating. In the end, not one of them — not even the precocious Gore Vidal — is growing up fast enough. Or are they maturing too fast, before you have molded them?

Anaïs, you are many women. You have invented many versions or phases of yourself. It is all in your diary: the charitable deceits, the masks, the ecstasies, the fear, the intervals of seeming death, the carousel of possibilities. As you note, “There is sadness for the dying selves that must be killed for the sake of the new ones.”

You have difficulty transforming the women you sketch in your diary — Luise Rainer and others — into authentic characters in your fiction. The men, as well, are best left in your other, scripted, self — the diary-self.

Your books, for the most part self-published, find both enthusiasts and hostile critics. A coterie of devotees sustains you socially and emotionally, but not financially. Even when a major publishing house, Dutton, publishes several volumes, having a reputable imprimatur does not bring success. None goes beyond a first printing. Your seduction of the powerful critic Edmund Wilson is a dead end.

The oscillation stretches on and on. The occasional successes bringing interludes of frenzied, joyful self-esteem, and then the deadfall chill of despair. There is no peace.

How do you go on? You go on. Endurance is your game plan. In another 20 years, it will pay off. Your art has been waiting for the 1960s. The man you meet as this diary volume closes will help you get there; you’ll be esteemed as the woman-artist you yearn to be.

Meanwhile, your intricate, obsessive self-study is laid out here: exquisitely nuanced, ornate, delicate, and raw, endlessly evocative and provocative. Nobody does it better. Your house or mine?

Philip K. Jason is the editor of the trailblazing Anaïs Nin Reader (1973), author of Anaïs Nin and Her Critics (1993), and editor of The Critical Response to Anaïs Nin (1996). He has also written dozens of articles, book chapters, and reference-book entries on this intriguing author.

An investigation of recalling it all.