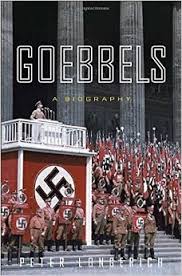 Joseph Goebbels’ life was certainly history-making, but it’s a piece of history noted for its grotesque notions of nationalism, democracy, and leadership. For many years the Nazi regime’s minister of propaganda, Goebbels refined the art of mass psychological manipulation, over and over again rallying a despondent and pride-hungry people into becoming more and more the fervent worshippers of a mad genius and a mad vision of national and racial destiny.

Peter Longerich, who first published this book in Germany in 2010, conceives of three major phases in his subject’s life.

First, he portrays an insecure fellow whose compensatory delusions predict greatness of some sort. This young man needed large doses of positive feedback, beginning with mother love that eventually developed into an addiction to Führer love. His doctorate in German letters did not open doors for his aspirations as a literary and cultural shaper. Once Goebbels turned his attention to political action, though, he made the right moves to advance quickly through the party ranks.

The second phase concerns his activities as prewar propaganda minister, hammering an imaginary political and cultural consensus into place through skillful manipulation of news and entertainment media and through staged demonstrations. He was adept at building Hitler’s image as a demigod (demagogue?) and in building a strong personal relationship with his mentor and hero.

Finally, he beat the drums for war, wartime sacrifices, and the ever-out-of-reach peace that would arrive with the continental dominance of a never-realized superstate.

For all this, Longerich insists his subject was not a true insider but was often surprised by actions set in motion by Hitler during meetings to which Goebbels was not invited.

Of particular interest is Goebbels’ role in developing the political uses of anti-Semitism. Even as any remaining Jewish civil rights were demolished, even as mass executions began, even as Jews were fleeing or being relocated out of Berlin, Goebbels found ways of making the Jews responsible for all of Germany’s problems. It’s hard to say what he truly believed about Jews, so overwhelming was his commitment to using anti-Semitism as a political instrument.

Longerich’s primary source is his subject’s diaries. Indeed, they are important historical documents that give unparalleled coverage of hundreds of events. They also provide unintentional clues to Goebbels’ anxieties and nonstop posturing. Longerich points out instance after instance in which narcissist Goebbels interprets an event’s outcome to his advantage. In the author’s capable hands, we discover how the diaries reveal just what Goebbels would not want them to reveal.

This natural human failing is in Goebbels’ case of such a magnitude that it is aberrational. It is darkly delightful to follow Longerich’s psychological prowess in revealing the sordid reality beneath Goebbels’ carefully created image. It is all propaganda for himself.

In their later stages, the diaries are also perhaps an attempt to shape the future’s judgments of the Nazi enterprise and Goebbels’ contribution.

Along with the diaries, Longerich draws upon Goebbels’ youthful literary works to discover the seeds of his self-creation, his inchoate ideology, his sense of destiny, and his hungers and fears.

The author reveals Goebbels as lover, husband, and father. Also, as a dandy, a lover of uniforms, and an actor who created a part for himself to play.

Goebbels’ private life plays a significant role in his diaries and thus in Longerich’s study. Readers become aware of the importance to Goebbels of having a woman companion, and yet we see him develop long-time relationships with several women that involve cycles of intimacy and withdrawal. His narcissism, manifest here and in other aspects of his life, demanded liaisons with attractive women, but it also complicated and compromised these relationships.

Even after he married and had children, his true loves clearly remained the Nazi cause, his prominent role in the party and the government, and Hitler’s approval and praise. As these possibilities failed, so did the value of his existence. Soon after Hitler’s suicide, Goebbels and his wife Magda murdered their children and followed Hitler’s lead with their own dual demise.

Longerich underplays his own horrified reaction to the events and characters he portrays. His professional coolness, however, only magnifies the horror. Perhaps that is the sole strategy available to the working scholar exploring part of history’s premier nightmare. Writing primarily for a German readers, Longerich and his translators do not always take the wider audience into consideration.

Though the book contains a list of abbreviations, it does not list perhaps the most important one, SA, a standard abbreviation for Sturmabteilung (stormtroopers) that appears through much of the book. Also known as the brownshirts, the SA were the security and enforcement arm of the Nazi (National Socialist German Workers) Party.

The biographical narrative runs about 600 pages, with the rest of the nearly 1,000-page book taken up by a long parade of sources and notes.

This biography is an immense achievement, a compelling though lengthy reading experience that probes the mind and soul of an unfathomably grotesque figure, along with his significant role during a most brutal chapter in European history.