This mixed bag of a debut novel features interesting characters but an incomplete narrative. 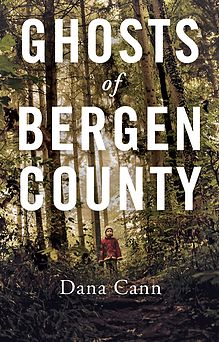 A novel is a complex project, not to be undertaken by the faint at heart. In that way, it is similar to other creative endeavors. In fact, a successful work of fiction expands somewhat like a photo essay, each scene or storyline a snapshot of the characters’ experiences at that time and place. The disparate elements stand on their own while also contributing to the greater whole in some deliberate, often revealing manner; each part builds on the next until a complete story has been told.

Dana Cann’s debut novel, Ghosts of Bergen County, is more akin to a haphazard collection of faded and blurred pictures: The book stretches for purpose and meaning but falls short of any satisfying conclusion.

Ghosts revolves around two main storylines: that of Gil and Mary Beth Ferko, a grieving couple who lost their baby in a tragic accident that Gil blames Mary Beth for; and Jen Yoder, a cocaine addict who also struggles to overcome a dark incident in her past.

As Jen and Gil, who attended the same high school, start to reconnect (and Gil, too, begins to depend on drugs to escape his dreary reality of a Wall Street job and depressing home life), Mary Beth meets a mysterious presence — a 6-year-old girl named Amanda — in the woods near their house.

While these two plots may seem promising in terms of both emotional exposition and forward movement, most of the characters’ interactions fall disappointingly flat. To Cann’s credit, it’s clear he sympathizes with his characters and wants you to, as well — it’s just that they’re not all that sympathetic.

When Gil has a heated argument with his boss over work absences stemming from his increased reliance on cocaine, he reflects, “These sorts of flare-ups occurred more often than they should have. [He] had been on the receiving end a few times. He’d survived them before. He doubted he would this time.” This flat, unfeeling, inexplicable train of thought leaves the reader almost no room to react to what seems to be a dire situation that could lead to Gil’s being fired. Because Gil doesn’t seem to care, neither do we.

Somewhat ironically, Mary Beth, who, at the start of the book refuses to get out of bed, is being propelled forward both emotionally and physically by her encounter with Amanda. At first, she believes the girl attends the local preschool, but fairly quickly realizes she is, in fact, a ghost.

Amanda, who seems to semi-perpetually inhabit the woods where she died, brings Mary Beth face to face with the reminder of her own dead daughter, which seems to both soothe and unsettle her. The dynamic between Mary Beth and Amanda is one of the most powerful in the book. One of the reasons Gil and Mary Beth’s marriage is foundering is that they are both paralyzed by their own anger and regrets and are thus unable to relate to one another, but Amanda behaves exactly like the child she is (or once was), with little regard for anything not surface-level. In treating Mary Beth normally, Amanda allows Mary Beth to behave normally, essentially drawing her out of her grief.

Although a relationship develops between the two, Mary Beth and Amanda’s interactions, at first charming in their simplicity, are increasingly stymied by their lack of purpose and movement. Mary Beth tries with agonizing slowness to learn Amanda’s history, a subject that seems utterly uninteresting to Amanda herself.

Though Amanda is one of the most enigmatic characters in the book, her reaction to her own death amounts to little more than a deposition — one which neither Amanda nor Mary Beth shows any desire to explore further: “I don’t know what happened to me.” And later, ‘“It doesn’t hurt,’ Amanda said. The bird sang. Then again. ‘It’s sad, I guess, but it doesn’t feel sad. It doesn’t feel anything.’ Amanda shrugged. “‘It’s okay.”’

Again, readers may find themselves inclined to care but feel there is a key ingredient — perhaps simply the characters’ own acknowledgement of their feelings — lacking.

Mary Beth and Gil’s sluggish progressions are occasionally interspersed with chapters from Jen’s point of view, which seems to be shaped by Jen’s addiction and her lackluster desire to get clean. Cann describes bizarre incidents in which Gil uncomfortably takes part — for example, Jen posing as a mannequin in a department store before stealing a dress — along with Jen’s utterly unremarkable apartment, where she spends most of her time high or curled up in a stupor of withdrawal. It is difficult to find meaning in Jen’s behavior, although perhaps the implication, in this case, is that not everything must have meaning.

As all storylines in a book must meet, Gil and Mary Beth’s narratives eventually collide with Jen’s. You can say this for Cann — his climax, which he has built throughout the book with subtle hints, is impressive in its clarity and cleverness, if all too short.

Here, finally, is a moment in which Cann should allow his characters time to reflect and feel the consequences of their actions and discoveries, and yet the book trails into an unresolved ending that leaves the reader grasping for more. In all, Ghosts of Bergen County has a few touching and insightful interactions, but readers could become too distracted by its lack of focus to find them.

This Scandinavian crime novel is not what you think it is.